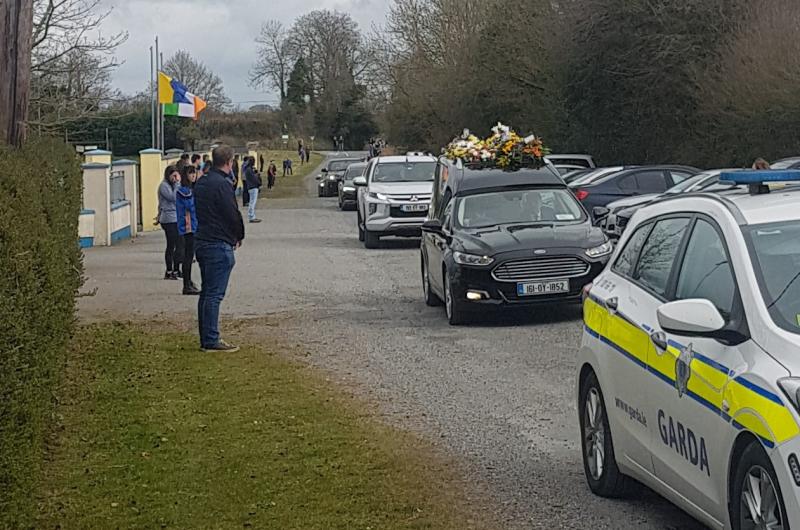 IT was a funeral with a difference but it was not any less poignant or emotive for that as Ballycumber bid a fond farewell to one of its favourite adopted sons on Wednesday.

The sudden death of Conor Connelly the previous weekend had stunned the closely knit local community as well as his home area of Creggs in Roscommon and the wider counties of Offaly, Roscommon and Longford.

While living in Ballycumber since the late 2000s, he never forgot his roots or his love for his home county.

Just turned 44 years of age this January, Conor died suddenly while out jogging near his Moorock home on March 28.

A solicitor based in Dublin, he had made an indelible contribution during his all too brief sojourn. He was particularly well known in GAA circles – starring alongside Martin Flanagan in a St College's Longford midfield pairing that claimed Leinster Colleges glory in 1994, a minor and underage footballer with Roscommon, his greatest day came when he was on the half forward line as they won the Connacht Senior Football Championship in 2001.

He played for Connacht that year – the Leinster squad that beat them included future brother in law, Colm Quinn, an Offaly hero as they won the Leinster Senior Football Championship and National Football League in 1997 and 1998 – and also got a trial for the Irish international rules squad that year.

2001 represented the pinnacle of his football career but it was by no means the end of it. He transferred to St Jude’s in Dublin, back to his beloved Creggs and then finally, Ballycumber after falling in love with and marrying Claire Quinn, sister of the above mentioned Colm.

His move to Ballycumber was in 2007 and he began playing with them from 2008 onwards – despite being very much in the winter of his career, he won a Division 5 Football League medal with them last year. He was a key man in midfield or half forward line as they competed very well in the Senior Football Championship for a few years before relegation back to senior “B”. He was the manager when they won the Senior “B” Football Championship in 2015 and was assistant secretary of the club at the time of his shockingly premature death.

He made an instant impression on the GAA community in Offaly. He was an all action, gung-ho type of player who loved to be involved and had a great engine.

Games involving Conor Connelly were always intriguing to watch, you never knew what would happen, what he would do but beyond all that, he was an excellent footballer who made a powerful contribution to every team he played on and made a lasting impression on team mates and opponents.

The Covid-19 restrictions meant that his funeral was one with a difference.

In normal circumstances, a multitude of people, a small million would have passed through his house at his wake and attended his funeral but it was a family only affair.

However, the local community came out in force to pay a poignant, emotional tribute to him as the hearse made its way to Boher Church from its Moorock home.

It went on a loop, passing through Ballycumber village and the GAA pitch before arriving in the Church with his burial ground across the road. Residents gathered outside of their houses, in the village and at the GAA field.

Ballycumber flags flew out of almost every gate, it and the Offaly flag were at half mast at the GAA field. Flags were also flown in his memory in Creggs and throughout Roscommon – and it was very fitting that the Ballycumber blue and yellow colours are very similar to each other.

There were plenty of tears but there was also laughter as colleagues remembered old times, told stories of incidents and games long forgotten – cherished memories that ensured the funeral was a celebration of a life well lived to the full.