There was heartbreak for Longford duo Enda Williams and JJ Matthews this evening as they part of the New York side that lost out to Leitrim after extra-time in the opening round of the Connacht Senior Football Championship quarter-final in Gaelic Park, New York.

New York enjoyed a dream start and they established a 1-4 to 0-1 lead after ten minutes, however, over the closing 25 minutes of the opening half, Leitrim outscored the men from the Big Apple by 0-8 to 0-1, with Emlyn Mulligan and Keith Beirne leading the charge.

A Daniel McKenna (free) helped NY force the issue to extra-time (1-12 to 0-15). With thirteen minutes, of the twenty minutes extra time gone, NY enjoyed a 1-15 to 0-15 cushion and looked to be on course for a historic win.

And in a welter of excitement, gutsy Leitrim landed four points on-the-trot, with Noel Plunkett grabbing the all-important winner. 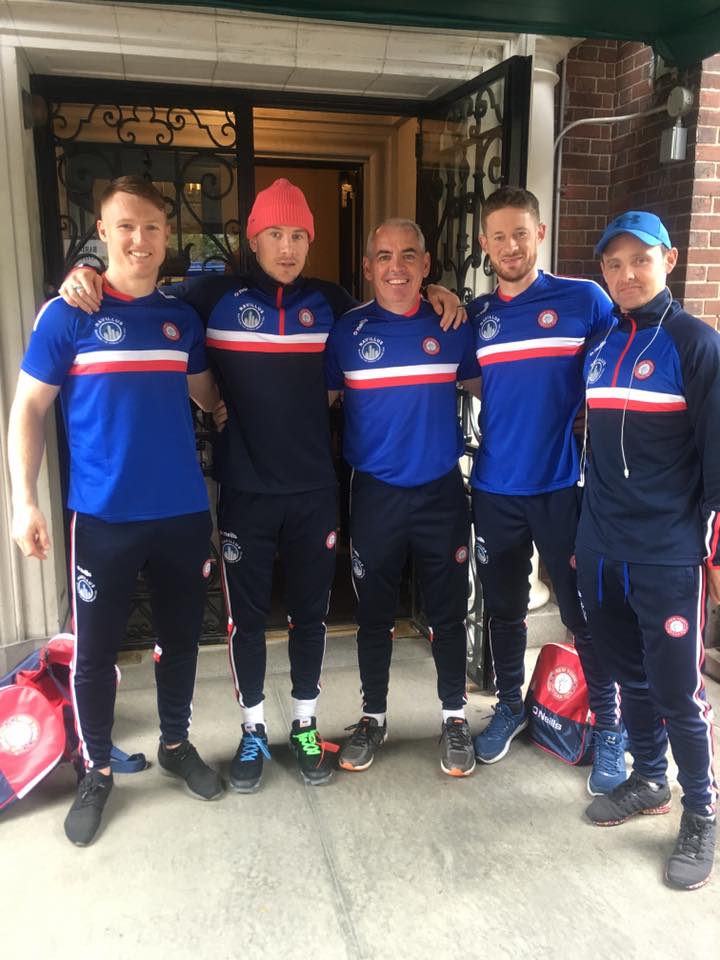 Leitrim opened the scoring with a second minute converted free by Keith Beirne but by the 10th minute they found themselves six points adrift as New York reeled off 1-4 without reply.

Shane Hogan crashed home the NY goal and the points were added by David Culhane, Jamie Clarke (2) and Neil Collins.

The very best of luck to @NewYorkGAA in the fist round of the Connaught Championship vs @LeitrimGAA today.
Good wishes to the Longford lads involved, Dermot Yorke, Enda Williams and Gerry Fox

By the 24th minute, Leitrim, cheered on by their enthusiastic supporters in the 4,000 strong attendance, had cut the deficit to a point, 1-4 to 0-6.

Emlyn Mulligan contributed three points as he teased the NY defence and Beirne added two points, one from play and the other from a ‘45.

Half-time at Gaelic Park! The scoreline gives Leitrim the slight advantage, they lead New York 0-9 to 1-5. Still all to play for in the @ConnachtGAA Football Senior Championship Quarter-Final! #GAA pic.twitter.com/O2gyee6G4H

Whatever Cavan native and NY manager Justin O’Halloran said to his players during the half-time break, it had the desired impact as on the resumption they registered three unanswered points, 1-8 to 0-9, through Luke Kelly and Tony Donnelly (2 frees).

NY refused to lie down and with two points from former Armagh star Jamie Clarke they regained the lead, 1-10 to 0-12, after 59 minutes. It was also at this stage of proceedings that NY sprung Aaron Cunningham (Armagh) and Keith Scally (Westmeath), giving an indication of the depth to their squad.

It's 2003 all over again! New York and Leitrim are headed to extra-time! Who's going to progress? pic.twitter.com/e8ezWRT7t0

NY, who sprung JJ Matthews (formerly Mullinalaghta St Columba’s and Longford) from the bench, equalised yet again in the 70th minute with a Daniel McKenna (free). Both sides tried hard to engineer a winner in normal but it failed to materialise. Full time (normal time): New York 1-12 Leitrim 0-15.

Also read: JJ enjoying a bite of the Big Apple

Leitrim opened extra time by frustratingly kicking four wides in succession but NY weren’t as wasteful and in the 9th and 10th minutes of the first half of extra time, Kevin O’Grady and Jamie Clarke bisected the uprights, giving NY a 1-14 to 0-15 advantage.

In a highly dramatic finish, NY ‘keeper Vinny Cadden denied Shane Quinn from point-blank range and the ball flew over the bar. And as the game drifted into its dying seconds Noel Plunkett grabbed the winning point. Result: New York 1-15 Leitrim 0-19.

Leitrim need extra-time but march on in @connachtgaa SFC after a narrow victory over their hosts @newyorkgaahttps://t.co/EEtH4Wbi06 pic.twitter.com/6WB9H3sEmt

There won’t be a sheep that’s not just started breathing again in Leitrim tonght. @LeitrimGAA -putting us through it on twitter since.....
Well done lads, fantastic effort to pull the fat out the fire Commiserations to @NewYorkGAA - thoughts with @thebullman6