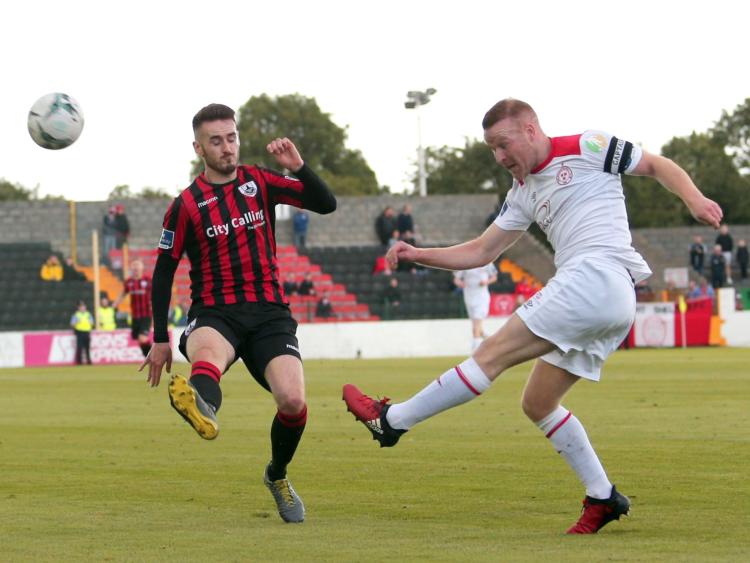 After the disappointment of the home defeat by Shelbourne in the top of the table clash on Saturday night at the City Calling Stadium the Town manager Neale Fenn will have to lift his players for the trip to Dalymount on Friday for the clash of the red and black in the second round of the FAI Cup.

Just over a week after defeating near neighbours Athlone Town in the first round the Town face a Bohemians team that scored ten goals on Friday night last in a league game at Dalymount Park.

Bohemians may not be the big spenders in the Premier Division but they have assembled a more than useful squad and that is a tribute to manager Keith Long.

Keith may be the manager but his assistant Trevor Croly will be remembered from his time at the Town as assistant to the then Town manager Stephen Kenny. Trevor has been hailed as one of the best coaches in the League for many years and there is no doubt that he has a big influence in the goings on at Dalymount Park.

The Town has played Bohemians in the Cup on four occasions and unfortunately they have beat us on all four occasions.
The stand out game in the four to date was the 2001 Cup final when Stephen Kenny's Town lost to a Roddy Collins side going for a League and Cup double.

WATCH | Longford Town come from behind to reach second round of the Extra.ie FAI Cup

Kenny began his managerial career in Longford and he took us from the bottom of the First Division to the Premier Division in a few years and also into the Cup final. The final in Tolka Park ended one nil to the Bohs with the only goal of the game being scored by full back Tony O'Connor but there was great news for the Town as they qualified for the UEFA Cup because of Bohemians winning the double and that year the Town headed to Bulgaria to play Litex Lovech which was a massive achievement for a small country club.

The most recent meeting between the clubs was in 2011 and on that occasion the Dalymount side won 3-1.

The fact that at the moment Bohemians are sitting in third place in the Premier Division ahead of the likes of Derry City, St Pat’s Athletic, Sligo Rovers and Cork City is a great achievement.

Such is the situation at Bohs that they lose players regularly at the end of the season due to the fact that many players are on yearly contracts.

Last season they lost centre half Dan Casey to Cork City and winger Daniel Kelly to Dundalk and midfielder JJ Lunney signed for Waterford while keeper Shane Supple who had a superb season had to retire due to injury.

Bohs may have lost all those players but manager Long didn't panic and he made some very shrewd signings and Bohemians are one of the hard teams to beat in the Premier Division. Going through the Bohs squad one can see why they are so successful.

James Talbot has come in to the team as keeper in place of Shane Supple and the Town supporters will know their reserve keeper Michael Kelly who was the Town's number 1 last season but left to go to England to further his ambitions but he has returned to Ireland.

The defence are a very formidable outfit and they have the third best defensive record in the Premier Division. Derek Pender is their most experienced player who is with the club for seven seasons but missed games recently due to suspension.

Aaron Barry, who previously played with Cork City and Derry City has many years experience, while Darragh Leahy ex Coventry City and James Finnerty, who was with Aston Villa, are regulars in the defence.

Keith Buckley, who joined the club back in 2010 but left for Bray for 2 seasons ago, is one of the club's longest serving players and a top performer in midfield.

Former underage player Danny Grant is holding on to a midfield position despite the strength of the panel and is keeping the likes of Keith Ward who played with Dundalk / Derry and Sligo Rovers having started out with UCD.

Former Wolves starlet Conor Levingston, who was 5 years with the club, is another very good midfielder and they can also call on former Stevenage player Luke Wade-Slater.

Dinny Corcoran has been Bohs leading marksman for many seasons but a recent injury has meant that manager Long had to add to his striking options.

In came Andre Wright who played a few friendly games for the club in July and after a quiet start the former West Brom apprentice exploded last weekend when he scored four goals against a luckless UCD.

Bohemians had to give away two balls after the game as former St Kevin's Boys and Brighton player Danny Mandroiu helped himself to a hat trick against the doomed UCD side who now seem destined to a quick return to the First Division.

Mandroiu was the two goal hero the previous weekend in the first round of the FAI Cup when Bohemians came from two goals down to win three two in the final minutes to beat Shels. Keith Buckley scored for Bohs in the 85th minute and Mandroiu scored two late goals in the 88th and 90th minutes to shock the large Shels travelling crowd.

This Bohemians team have scored 13 goals in two games and they will no doubt be thinking of a long run in this years Cup campaign especially when they are at home to another First Division side.

The Town will definitely be licking their wounds after last Saturday night's defeat to Shelbourne who now seem destined for a return to the Premier Division. There is no doubt that this wasn't a vintage performance from the Town.

Shels boss Morris really did his homework and The Town were not allowed to play their usual passing game and the likes of Dean Byrne and Dylan Grimes were bullied out of the game by the much stronger Shels players.

In fairness Lee Stacey hadn't a chance with either of the Shels goals and a lot of people in the ground were adamant that the opening goal had more than a hint of offside. Supporters were not happy with many of the poor decisions given by the man on the middle.

The Town's best player Aodh Dervin was on the receiving end of some rash tackles during the game and he got absolutely no protection and got a yellow card for all the abuse he received from the Shels players.

Shelbourne had their plan and it worked so it's back to the drawing board for the Town for the Cup game on Friday and then the final three league games and then hopefully the play off games.

One couldn't question the Town starting eleven on Saurday but we weren't clever enough for the opposition and with that in mind we need to get back winning and where better to do that than in Dalymount Park on Friday.

There is no doubt that there will be a huge crowd presentand we would want to thank Bohemians who are rumoured to have given the Town a set of jerseys back years ago, thus us having the famous red and black like Bohs.

There is no doubt that Bohemians will be on a high after scoring ten against UCD and their come back against Shebourne in the last round of the Cup.

We would like to thank our fantastic supporters for the fabulous turnout on Saturday and they got behind the team all throughout the game. Bring along your colours and flags on Friday next and let Dalymount hear the Town roar. Come on the Town.