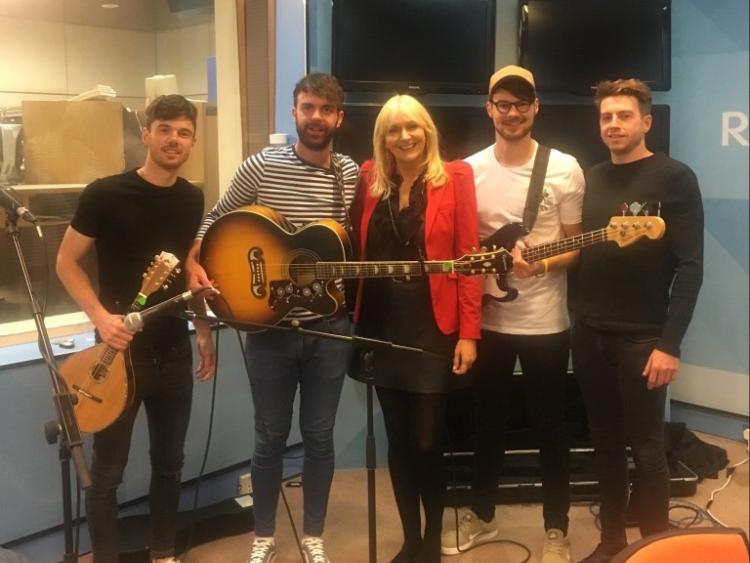 The star of Longford band, Brave Giant, continues to rise and this morning they appeared on the 'Sunday with Miriam' show on RTÉ Radio 1, impressing host Miriam O'Callaghan with a performance of their new single 'Somebody's Someone'.

Miriam described 'Somebody's Someone' as "beautiful" and "what a treat."

Brave Giant have gone from strength to strength, with their Spotify and YouTube views and listens both over the one million mark.

They opened this year's Marquee in Drumlish on Friday, August 17 and two days later they took centre stage at Croke Park, performing during half-time of the historic All-Ireland Senior Hurling Championship Final where Limerick ended 45 years in the wilderness and captured the Liam MacCarthy Cup.

Mark Prunty joked how he scored two points from play on All-Ireland Final day. 'It was phenomenal, a special occasion' to play before 83,000 in Croke Park, reflected Mark.

Podge Gill spoke of how the band came together seven years ago and Emmett Collum referred to how Brave Giant built their fan base on-line.

There are three secondary school teachers in the band - Mark, Ross and Emmett - and they spoke about their love of teaching and music.

Ross McNerney recalled how prior to the All-Ireland hurling final, he had a bad experience at Croke Park - being knocked out by one of his own team mates while lining out with Longford against Dublin in a Leinster Championship clash!

Indeed, it was a busy day for Ross, as after his appearance with Miriam, he made the journey to Glennon Brothers Pearse Park to line out with Dromard who drew with Clonguish in the Peter Hanley Motors Longford Senior Football Championship quarter-final.

Brave Giant play two shows at the Button Factory in the coming weeks.

Huge Thanks to @MiriamOCal for having us on her show this morning on @RTERadio1 ahead of our @ButtonFactoryv shows and release of ‘Somebody’s Someone’! It was one of our favourite interviews to date ! #RTÉ #SomebodysSomeone pic.twitter.com/W5j5UJmhsr

It was great having you all, especially Butch https://t.co/fwN8HYc6It