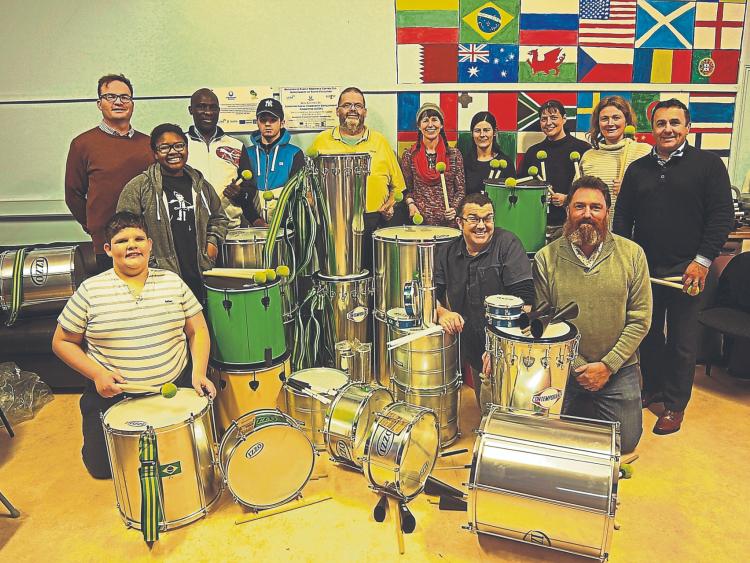 Longford Samba Band are starting up an eight-week programme for beginners in September Picture: Shelley Corcoran

Community is a big thing in Longford, with groups all over the county coming together to make their home a better place. One such group is the colourful, fun and highly entertaining Longford Samba Band.

The programme grew out of the Mide Street Theatre Group, whose purpose is to train up local people to create public art spectacles in the county. And Samba certainly does that.

“I had been involved in the organising of youth samba bands in Dublin City and called upon a few contacts to help us set it up,” said Shane Crossan, who has been involved with Longford Samba Band from the outset.

“Local public events such as the county’s St Patrick’s Day and Easter parades struggle to provide spectacle on a scale witnessed in the bigger towns and cities. The Longford Samba Band goes some way to address this.”

And there’s certainly a proper community feel to it, which is inspired by the very origins of the genre. Samba traditionally grew out of poor afro-communities in South America and is associated with community solidarity and social activism.

“It’s loud, and so it can help communities get heard,” said Shane.

“It’s all built around the rehearsal. There is very little hierarchy in the group; we all have to learn the pieces, which are based on a series of simple drum patterns played ensemble. We have people from all over county Longford and further still, from Slovakie, Congo, Brazil, Portugal… we even have people from Dublin.

“We have some parents and teenagers coming as well. We have a great teacher, Tom Duffy, from Rhythm Riot in Kilkenny. We also are very fortunate that one of our founding members is a great artist and problem solver - Phil Atkinson. And that is why we have amazing costumes - Phile delivered a series of workshops on costume-making to the group and we developed all of the band’s costumes out of that.”

The Longford County Arts Office has been very generously supporting this community initiative by providing grants for tuition and the band’s Samba drumming set.

LWETB and the Attic Youth House Project have also supported the group by allowing them the use of their premises for storage and rehearsal.

“This September will be the start of our third year - my how time flies when you’re bangin’ the drum!

“So far, we have played in local parades, but this summer we are playing our first national gig - the Birr Summer Festival,” said Shane.

Longford Samba Band are starting up an eight-week programme for beginners in September - absolute beginners, Shane stressed, with no previous music or drumming experience necessary.

For more information or to get involved, see the Mide Street Theatre Group’s Facebook page.