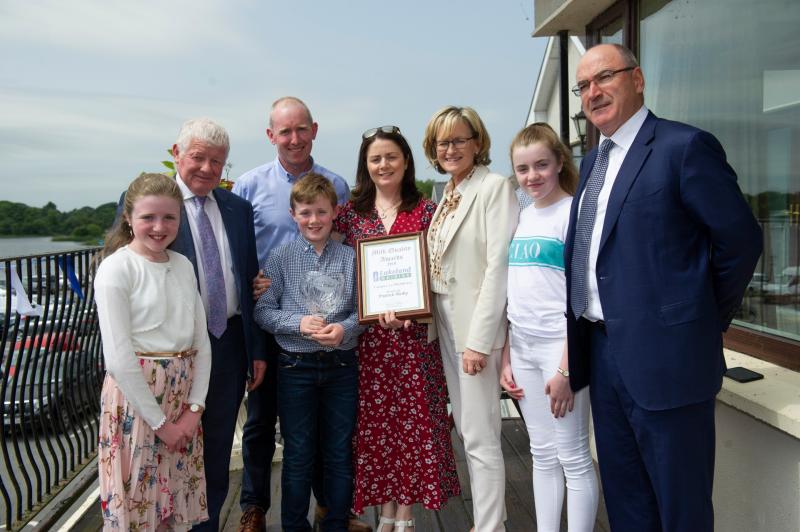 At the Lakeland Dairies Milk Quality Awards, dairy farmers from Northern Ireland and the Republic of Ireland were honoured for the exceptionally high quality of milk produced on their farms. The awards publicly recognise the achievements of Lakeland Dairies milk suppliers who are committed to quality in all aspects of their milk production.

The winners emerged from among 3,200 farm families who produce milk for the 1.8bn Lakeland Dairies milk pool.
The awards were presented by Mairead McGuinness MEP (Vice-President of the European Parliament), with Lakeland Dairies Chairman Alo Duffy and Group Chief Executive Officer, Michael Hanley also at a special event on Friday, June 28.

Peter Robinson from Ballinagore, Co. Westmeath, won the Sustainability Category of the awards for his farm's outstanding commitment to sustainable milk production, based on measures including carbon footprint, biodiversity, water management and milk quality results.

Lakeland Dairies Chairman Alo Duffy paid tribute to all of the award winners: “Winning a quality award is something really special. The awards symbolise many years of commitment and hard work in achieving the highest possible standards of milk production including sustainability, hygiene, animal health and overall care for the environment.

“As a globally focussed dairy exporter, we continuously provide reassurance to our customers about the quality of our products, with systems that trace quality throughout the food chain. Our farmers and the litre of milk are the first building blocks in that process. The winners here today understand these requirements. I express my admiration and pride to all of the winners in the Lakeland Dairies Milk Quality Awards.”

“Ireland has the capacity to meet the demand for safe, traceable and nutritious wholesome food, produced in a sustainable way. The world population is growing and so too is the demand for food of high quality.

“These awards recognise excellence in quality milk production. I congratulate the award-winning milk suppliers of Lakeland Dairies for their commitment to excellence and I wish Lakeland Dairies and all of its members continuing success in the future.” Mairead McGuinness added.