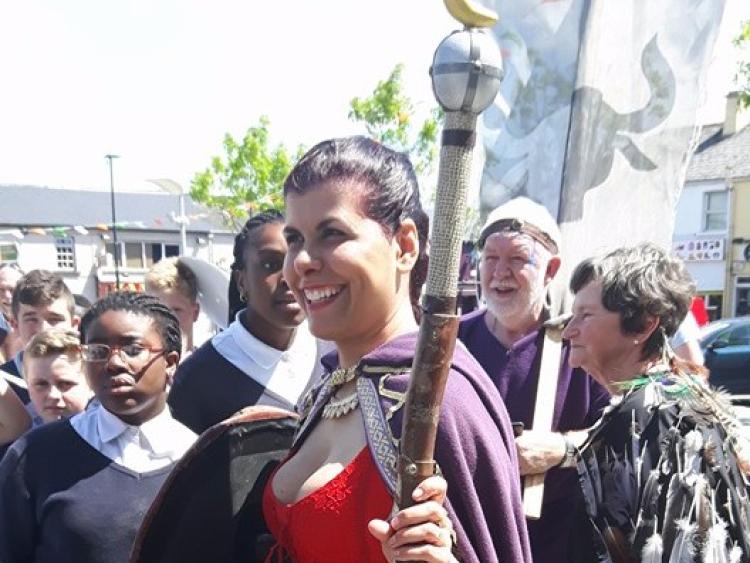 After the great reception received by the Táin March as they passed briefly through County Longford last May, they have decided to extend their visit to the county which is something to be celebrated and encouraged for years to come.

This year they are arriving in Clondra on Saturday the  20th,  marching from Clondra to Longford town on Sunday the 21st where they hope to wait a while before they continue their march from Longford town to to Balinalee on Wednesday, May the 24th and from there to Granard on Thursday, May the 25th.

They will march out of Granard and County Longford on the next stretch of their journey on Friday, May 26th. They want lots of people to join them on the various stages of their march. Anna Delaney is the County Longford contact person.

Before the March we should probably have a very quick revision session of the story of An Táin. I have made an attempt at retelling the story as briefly as possible so we can all be very wise on their arrival.

It all started with a husband and wife having an argument. Maebh and her husband Ailill were having a grand ould time in Cruachanaí admiring their armies and wealth til they started a "mine is better than yours" quarrel that got out of hand.

"I'm better than you" said the man.

"I have more than you" says he.

In fact they were equal in all except that Ailill had a bull and Maebh did not.

"Ah but I have a bull and you don't"  said Ailill.

"That is really my bull, you just took him."

"No I didn't, he preferred to be with me so Finnbhennach (The name of the Bull, the white one) is mine and now I have more bull than you."

"So you do but I can get one of my own and I will" and off she went on her travels to Cooley to rent the great bull Donn Cuailinge (the brown one) and thereby have as much bull as her husband. And she nearly did .......

Until her servants let the cat out of the bag, in their merrymaking and partying at Cooley,in Ulster that she would have taken the bull by the horns with or without his owner Dáire mac Fiachna's permission. He didn't like that and he chased them home with their tails between their legs and no bull.

Maebh being proud and not one to let it go, got her armies together with Fergus mac Róich  and headed off to take the bull from Dáire. Unfortunately for the men of Ulster they were taken ill  thanks to Macha putting a curse on their king because he wasn't very nice to her, and that's a nice way of putting it but it's another story for another day.

The only one able to fight was the young hero Cú Chulainn who was too busy horsing around instead of guarding the border so he never  noticed the army coming in to capture the bull. He and Láeg, his charioteer, (Did you know they had great chariots, better than any roman ones?) waged guerrilla warfare against the army and when that didn't work he fought champion after champion in single combat for a very long time, I mean, a very very long time, a very very very long time and Maeve still got the bull.

Poor Cu Chulainn had a hard old time. The fairy folk played with him

The Morrigan, a powerful Goddess, pretended to be a beautiful young woman and offered to love him but he was a bit too busy for love at that time and said no.

She got angry and messed with him in his next fight. She became an eel who tripped him, a wolf who stampeded the cattle and then a heifer at the head of the stampede. Cú Chulainn wounded her each time and once he won his fight Morrigan appeared as an old woman milking a cow with three wounds in the places Cú Chulainn had wounded the eel, the wolf and the heifer.

She offered him milk and he gladly took it being thirsty after his battle and each time he took a drink, (funny enough three times) he blessed her and each blessing healed her wounds.

Lugh, a great and mighty God visited him during a really heavy fight and announced he was Cú Chulainn's father, timing is everything! Lugh put him to sleep for guess how many days... three, imagine that, and he healed his wounds while he slept. While he was sleeping the young warriors of Ulster came to help in the fight but were killed.

He woke up and was very angry and turned into The Incredible Hulk, oh sorry that's another story, but his body did twist in his skin in anger and he became a monster full of rage and went after the Connacht camp, killing six for every one of his friends that were killed. Nasty!!

Once he calmed down he began the one on one battles and the rounds were short and full of knock outs like McGregors. Maebh didn't stick to the rules at times and sent  lots of men at once for the fight but he still won because he is Wolverine, oh I mean Cú Chulainn.

Now you all know he had just met Lugh, his father so that means he wasn't brought up by Lugh but had a foster-father, and this man's name was Fergus, the one mentioned before so you now know that unfortunately Fergus was on the Connacht team and not the Ulster team.

Fergus was sent out to fight his foster-son whether he wanted to or not. They make a  pact to take turns winning with Cú Chulainn agreeing to yield to him on the condition that Fergus yielded the next time they meet. Now remember that!!

The fighting went on and on for miles and miles and up and down the country, along the path of An Táin March that we are going to join in, aren't we?

Finally there was a How many days? Yes you guessed it, a three-day duel between the hero, who is the hero? Cú Chulainn and his foster-brother and best friend Ferdiad, who he grew up with and trained with and loved. Cú Chulainn won and killed Ferdiad.

Then, when it was too late for Ferdiad, just like in the films,  the Ulstermen started to get better, one by one at first, then all of them and the final battle began. Cú Chulainn was a bit tired and sore so sat down.

Fergus , his foster father was about to kill Conchobar,  a king of Ulster, but Cormac, Conchobar's son stopped him so Fergus chopped the top of, how many? Yes, three hills off in rage. Cú Chulainn got fed up watching and joined in and confronted Fergus, reminding him of their deal.

Do you remember their deal?  Fergus yielded to Cú Chulainn and his allies from Connacht panicked and so Maebh had to retreat, ah but....

She got the bull!

Maebh brought the brown bull back to Connacht but the white bull wasn't happy and they fought another long battle. The brown bull  killed the white bull  but he was wounded too and wandered around Ireland creating placenames before going home to die.

Some people say that Cú Chulainn was wounded by Ferdiad and was tied to a post facing his enemies standing while he died but actually that's another story too.