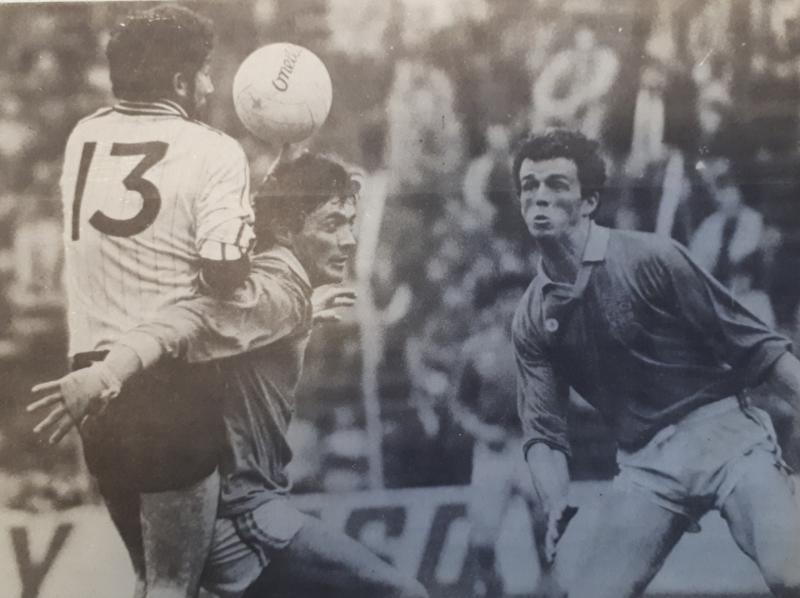 Rough for Duff! Sean O'Shea making sure that Dublin forward Ciaran Duff has no way through with another Longford defender Philip Smyth keeping a tight eye on the situation.

Against all the odds, Longford scored a shock 3-8 to 1-11 win over Dublin in a thrilling National Football League Division 2 game at Croke Park.

Somewhat fortunate to be only four points behind at the break (1-5 to 1-1) with Dessie Barry getting the goal, Longford produced a tremendous second half performance as they clawed their way back into the game with goals from John McCormack (penalty) and Kevin O’Rourke.

Longford then took the lead for the first time in the 43rd minute when centre-half-back Mick Casey burst through the Dublin defence to land a brilliant point.

But Dublin were always dangerous on the breaks and remained in contention mainly due to the accurate boot of Barney Rock who made good use of rather harshly awarded frees.

In the tense and exciting closing stages, three points without reply from John McCormack (2) and Kevin O’Rourke clinched a famous win for Longford who were managed by Slashers clubman John Murphy back in the 80’s.

Goalkeeper John Martin was just one of the many stars on this memorable occasion and while this was a great all-round team performance it was the opinion of many of the 6,000 or so Longford supporters among the attendance of over 11,000 that Granard man, left-half-back Philip Smyth, was the best player for most of the enthralling 60 minutes.

Click HERE and register your vote for Longford's greatest sporting moment. You'll find the poll in the sports section. You can vote once on each separate device you use to access the site (phone, laptop etc)