Kilbeggan all set for highlight of racing year 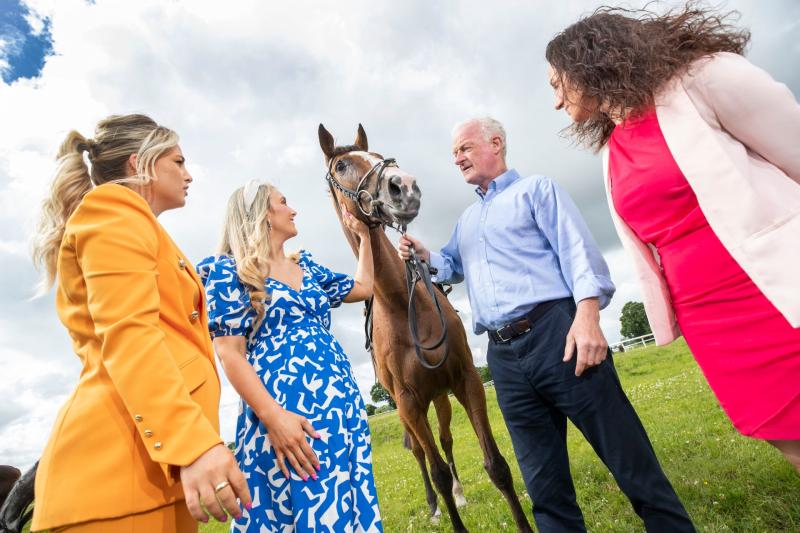 ‘Former dual Grade One winner, Battleoverdoyen, heads the weights in the €100,000 Grade B AXA Farm Insurance Midlands National Handicap Steeplechase at Kilbeggan on Friday as a high quality field of 14 are set to face the Starter.

The field includes last year’s narrow winner, The Big Lense, trained by Gordon Elliott and this one has to race off a 3lb higher rating compared to twelve months ago. While his form tapered off somewhat after last year’s success, The Big Lense is one of four runners for the stable with the pick of them likely to be the much-improved mare, Hurricane Georgie, who has won her last two starts over hurdles having earlier gone very close in a graded mares steeplechase at the Fairyhouse Easter Festival in April.

The 2021 Irish Grand National winner, Freewheelin Dylan, who also won this race in 2020, takes his chance once again on what will be his first start since finishing a highly creditable seventh in the Aintree Grand National at Liverpool three months ago while multiple champion trainer, Willie Mullins, saddles three runners with the improving Recite A Prayer, winner of the Tote Killarney National at Killarney on his most recent start, the pick of the trio.

Henry de Bromhead is another with a 3-pronged challenge and after winning a lesser event over a shorter distance at Kilbeggan last time out, Kapard must have sound claims although the Rachel Blackmore-partnered Popong, runner up in the Connacht National at Roscommon on his most recent appearance, will have plenty of supporters with the forecast good ground very much in his favour.

Owner J.P. McManus, fresh from hosting a very successful Pro-Am Golf event at Adare Manor earlier this week, has two strong chances with both Birchdale, trained by Enda Bolger, and Ilikedwayurthinkin, hailing from the Gavin Cromwell yard, both holding good form claims in what has all the makings of a cracking contest.’

AXA Farm Insurance Midlands National of €100,000 is the Highlight of Kilbeggan’s Racing Year

One hundred years ago in 1918 a paper stated, “as if by magic immunity from the artificiality of modern times, the Kilbeggan meeting has preserved to this day, all the tenures of the old-fashioned Irish race meeting –with its picturesqueness, its light heartedness, its sociability amongst the people mingling on the course”.

These words still echo what Kilbeggan races means to people of all ages, even more so in the modern world of the social media. The races are on Friday evening, July 8 with the first race at 5.20pm and it will be different in that the AXA Farm Insurance Midlands National of €100,000 is the Highlight of Kilbeggan’s Racing Year and the race has been upgraded to a Grade B race, with the prize fund increasing from €75,000 to €100,000.

It will be the first time for Kilbeggan to stage a Graded race, which together with the 25% increase in prize money, will help to further attract better quality horses and create more competitive and exciting racing.

Kilbeggan Races dates back to 1840 and since then many great horses have raced on the track from Gold Cup winner Koko to dual Aintree Grand National winner Tiger Roll. Perhaps this might be the year of another future champion in the Midland’s National. 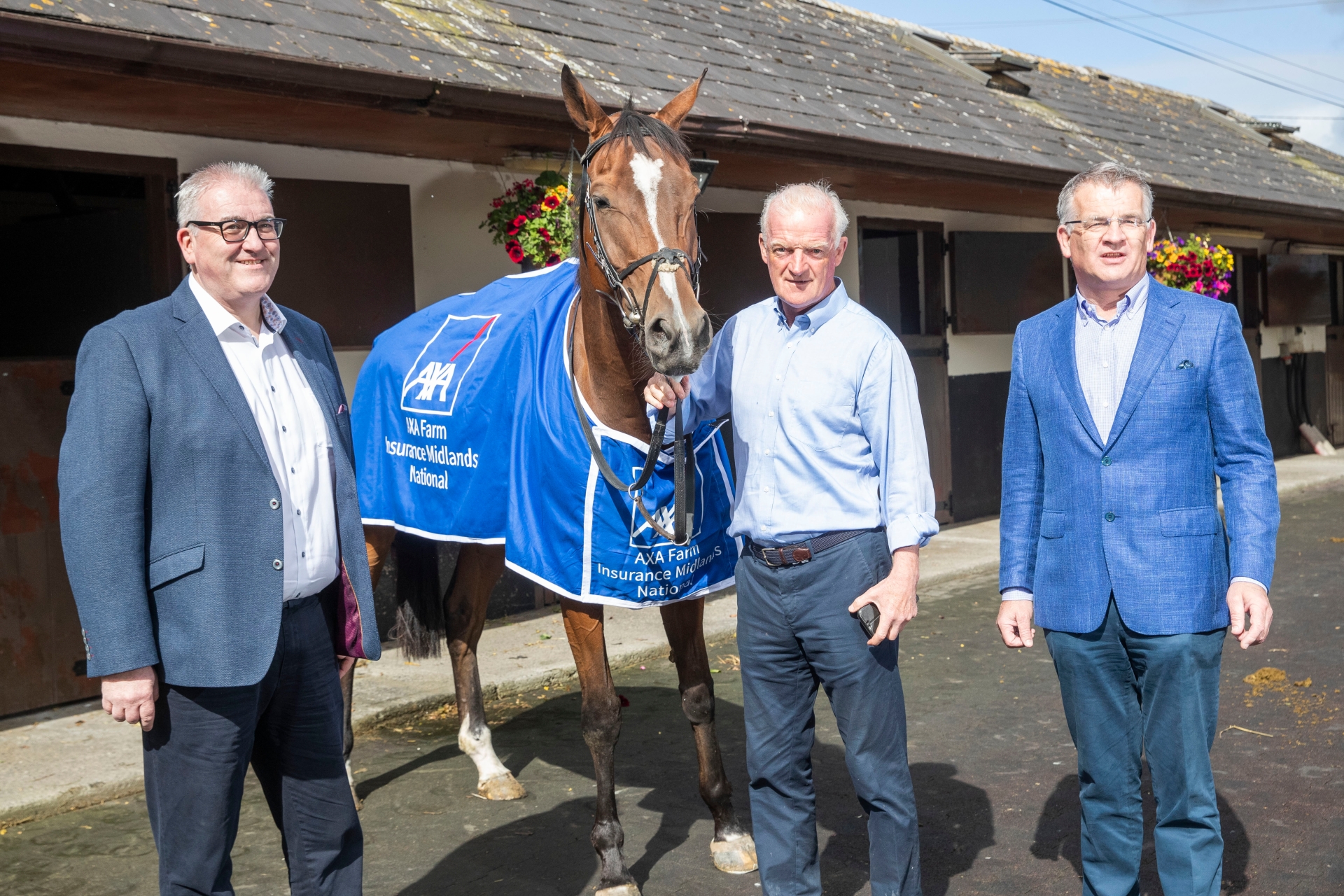 Paddy Dunican, Managing Director of Kilbeggan Races, said: “We are delighted that the AXA Farm Insurance Midlands National race has been upgraded to a Grade B race. With the support of our sponsor AXA Farm Insurance and Horse Racing Ireland, the prize money has increased from €75,000 to €100,000. We are excited to see some top-quality runners due to the improved status and increased prize money on offer. The aim has always been to have a graded race at Kilbeggan, so it’s great to see our vision come to fruition on Friday July 8.”

Christy Doherty, AXA Head of Agriculture, commented: “AXA Farm Insurance are delighted to continue our sponsorship of the Midlands National for the fourth year. The Midlands National is a very important event for our business as it provides us with the opportunity to engage with our customers at our local racecourse on their biggest race meeting of their season.”

Jason Morris, Horse Racing Ireland’s Director of Racing and Strategic Projects, said: “The AXA Farm Insurance Midlands National race has become a real feature of the summer National Hunt programme and Horse Racing Ireland is delighted that the quality of runners in recent years has justified the race’s promotion to a Grade B race, giving Kilbeggan a well-deserved first Black Type race.”

In addition, Writech Group of Mullingar are sponsoring a new feature handicap hurdle of €25,000 to further support the meeting and attract better quality horses. Writech based in Mullingar is leading the industry worldwide in developing cutting edge technology to design and manufacture fire protection systems for many of the biggest global technology companies in the world. Kilbeggan Irish Whiskey are sponsoring a hurdle race and there is a strong historic association of the Locke family being involved locally in Kilbeggan Races back to 1840. The Irish Stallion Farms EBF Beginners Chase at the meeting often produces useful chaser for the future.

Alan Wright said: “The Writech Group are delighted to support Kilbeggan Race Course on Midlands National Day. We are also looking forward in welcoming some of our esteemed clients to the event which shall be a very enjoyable occasion not to mention demonstrating the uniqueness of the Midlands Region. We would like to thank Paddy Dunican & his Team for the professionalism they have shown in assisting us on our Corporate Day in 2022”.

The Midland’s National race meeting is the highlight of the Kilbeggan racing year and the event has been described in many quarters as the social event of the year in the Midlands. Kilbeggan is all about the joy of the moment, whether it is a horse winning, a crowd cheering, friends laughing, families meeting, fashion dazzling, glasses clinking, music pleasing, or bookies paying. Willie Mullins has raced some very useful horses at Kilbeggan over the years and as his father the great Paddy Mullins stated in 1993 “There is a great buzz to it, unlike some of the deadly meetings we have to attend during the year”. There are seven races on the card and it all kicks off at 5.20pm on Friday 8th July. 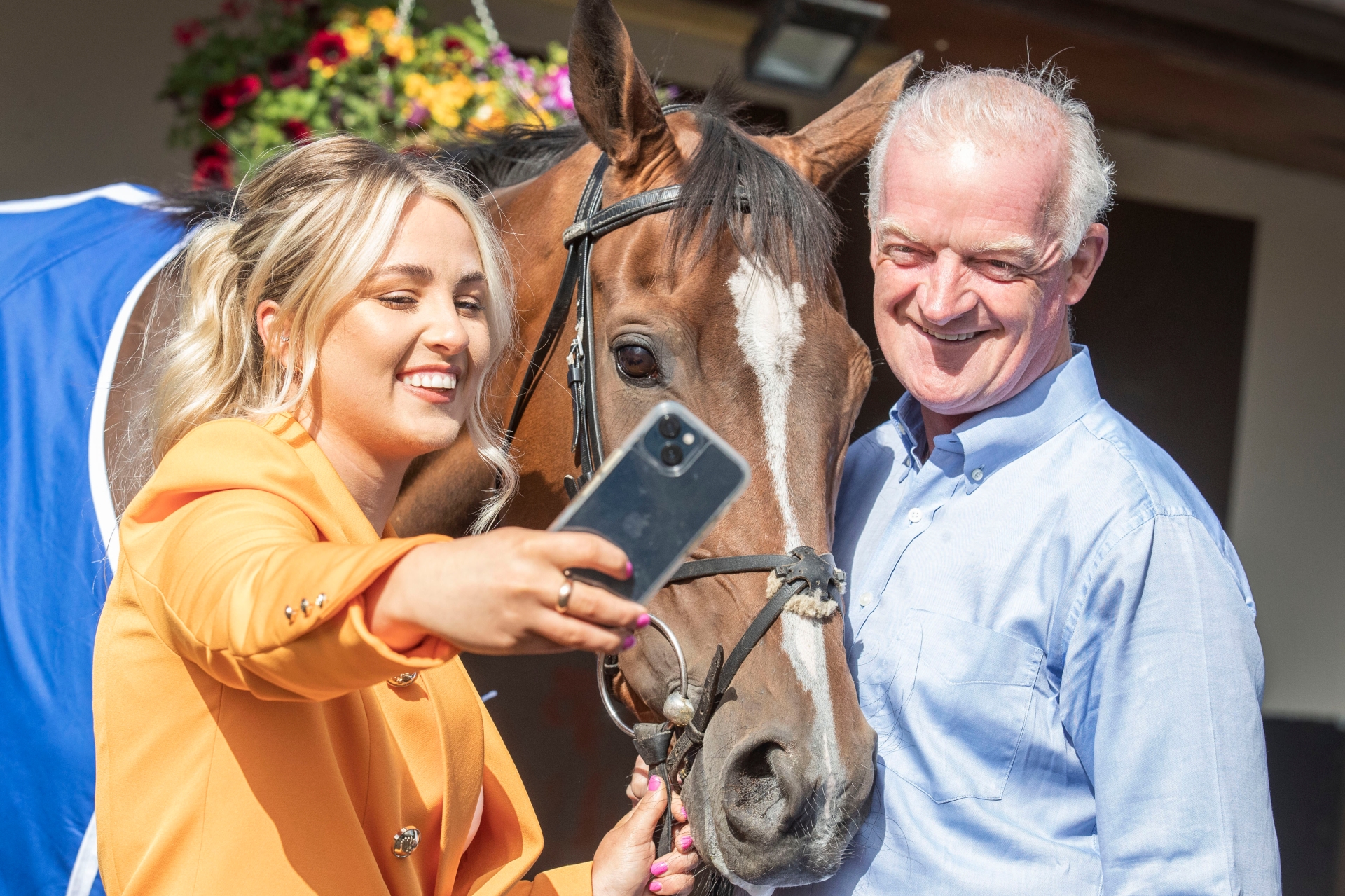 The Bellamianta Sustainable Style Ladies Competition with a prize worth €5,000 including €1,000 cash sponsored by Bellamianta Luxury Tanning and AXA at Kilbeggan Races. We are encouraging all of the wonderful ladies to show us their upcycled outfits, favourite ethical brands, whether it be thrifted, borrowed or handmade, with headwear an optional extra. Celebrity Judge: Mark Rogers.