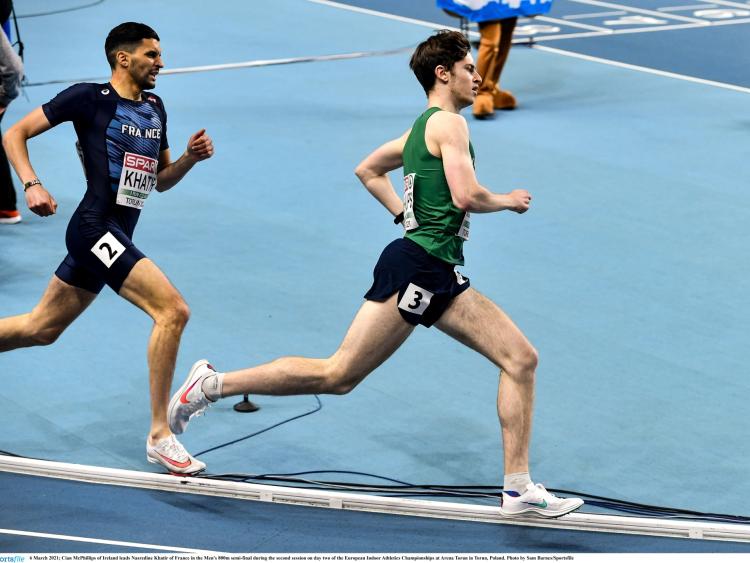 Longford's Cian McPhillips on the way to finishing fourth in semi-final two of the 800 metres at the European Indoor Championships in Torun, Poland Picture: Sportsfile / Sam Barnes

Longford's Cian McPhillips recorded a European U20 record as he finished fourth in semi-final two of the 800 metres at the European Indoor Championships in Torun, Poland this evening.

Cian ran a time of 1:48.06. It was the fastest time ever by an Under-20 athlete at the European Indoor Championships. Of course two weeks earlier, Cian clocked a magnificent time of 1:46.13, a National U20 & U23 record, at the Elite Micro Meet in the National Indoor Arena.

Borkowski won the semi-final but was disqualified under Rule TR17.2.2. However, the Polish delegation appealed the disqualification ruling and were successful, so Borkowski's 1:45.79 saw him progress to the final as the semi-final 2 winner.

Webb was second in a time of 1:45.99, with Kramer taking third place in 1:46.87 and missing out on qualification, as there were just two final qualification places on offer.

Spanish athlete Mariano Garcia (ranked 13th in Europe and with a PB of 1:45.66) who won the heat involving Cian McPhillips on Friday evening in a time of 1:49.86, missed out on a place in the final. Running in semi-final one this evening, he finished in third.

Mark English ran 1:48.99 in semi-final 3 which saw him finish in 4th and outside the two qualifying positions for the final.

Cian looked right at home taking on some of Europe’s top middle-distance athletes and the experience will certainly stand to him for future championships.

His performances certainly lifted the spirits of Longford folk watching back home and he is a credit to himself, his family, county and country.