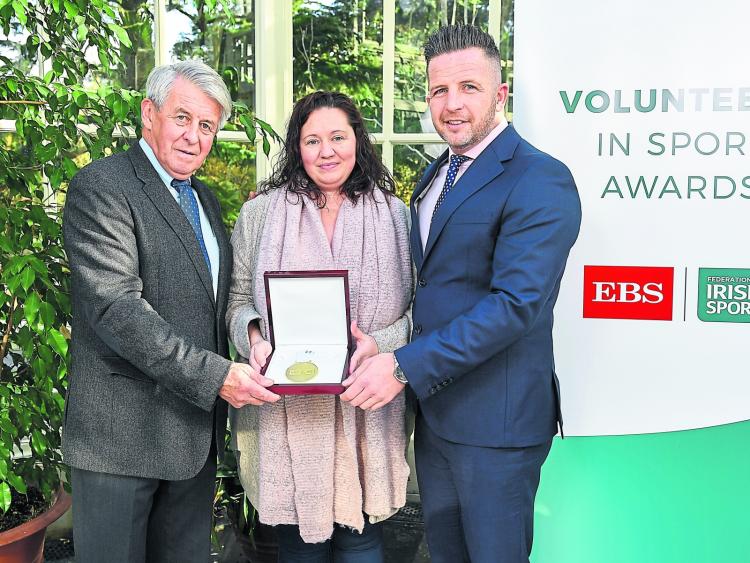 Carol Murray from Longford Slashers Hurling Club is presented with her award by Roddy Guiney, Chairperson of the Federation of Irish Sport, left, and Richard Gernon, Regional Manager EBS

A Longford woman is celebrating this week after landing a major sports volunteering award.

Carol Murray said she had been left greatly humbled following her recognition at the ‘Volunteers in Sport Awards’ inw Farmleigh House Dublin.

The local woman was presented by Minister of State for Tourism and Sport, Brendan Griffin TD for her volunteer contribution to GAA and Longford Slashers.

Speaking to the Leader, Carol said she was shocked with her nomination and subsequent win of the award.

The Volunteers in Sport Awards were created to recognise the contributions, commitment and dedication of the 450,000 volunteers who give their time to Irish sport each year.

This equates to approximately 37.3 million hours of volunteering across Ireland’s 14,000 registered sports clubs and associations.

Commenting at the awards, Mary O’Connor, CEO of the Federation of Irish Sport, said:
“Sport matters. It contributes to our health, binds us together as a community and supports the economy, while bringing a sense of pride to us all.”

Minister of State for Tourism and Sport, Brendan Griffin was equally enthused as he paid tribute to those honoured.

“It was a real honour for me to attend the Volunteers in Sport Awards. As somebody who has been involved in sport at an amateur level since I was a child myself, I have always marvelled at the commitment that so many club members show to their communities up and down the country.

“It is a real privilege to recognise the contribution made by those who do so much for others in fulfilling the less glamorous but most definitely vital and often overlooked tasks involved in almost any sport you can imagine. The men and women honoured today may not be household names across the country but in their own communities they are real treasures.

“I was delighted to speak to many of them today. My thanks to the Federation of Irish Sport and all those who made this ceremony such a memorable occasion for all the recipients.”