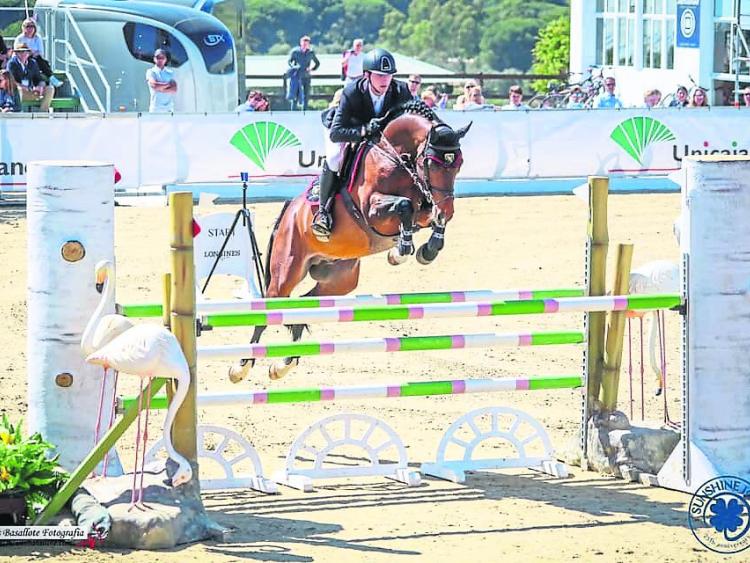 Jordan Kilkenny is making waves in the showjumping world

A talented showjumper, Jordan Kilkenny (21), from Kilcurry, Ballymahon, is living the dream and is part of what he describes as ‘the best stable in the world’, Cian O’Connor’s Karlswood, where his manager and trainer is fellow Longford man, Michael Kelly.

He jumped forty rounds on five horse in the up to 1.45cm grand prixs and knocked down four individual jumps, thereby making the trip to Spain a very successful one.

For the rest of this year, Jordan plans to compete in some good shows and hopefully secure some grand prix wins.
What are his future ambitions? “I would love to be able to represent Ireland in the Aga Khan on Friday in the Dublin Horse Show. Every Irish rider dreams of jumping a double clear on that day and then to go to the Olympics with Ireland would be the cherry on top.”

Jordan recalled as a 4-year-old seeing a horse in the paddock of his neighbours, the Geretys. “I used to go visit it everyday and felt that I always had some attachment to horses.” His parents took him and his brother, Dylan, to riding lessons at Mosstown Stables in Kenagh and Jordan never looked back.

He believes the horsemanship was passed down to him from his dad’s father, a winner of many competitions, including events at Dublin Horse Show.

As a 10-year-old, Jordan became acquainted with his mentor Andrew Farrell from Killashee, who is still is a big part of what he does today. “I would send Andrew videos and ask his opinion and everything I achieved in ponies, none of it would have been possible without him.” Jordan added, “Both my parents were very good to us, working long hours and then taking both me and my brother to shows and now it’s the turn of my sister Katelynn.”

Jordan spent time training and learning from respected figures like Gabriel Slattery, Clem McMahon and Greg Broderick. He is now a competition rider for a student of Karlswood training, Nicola Pohl of Reitsportanlage Dagobertshausen. He began working for Cian O’Connor in August 2017 after competing in Dublin. “To have a mentor like Cian is something that dreams are made of.”

Jordan’s link to Michael Kelly ‘is a little bit on the funny side’. “Michael’s younger brother, Sean, has been one of my best friends since junior infants in Colehill and still is. So it made the transition to this team a little easier knowing you had someone always there to lend you a hand and give you guidance when you need it.”

Jordan extended thanks to everyone who’s made his career possible so far and his sponsors makebe italia and Kep Italia.
‘Success is a reward for effort’ says Cian O’Connor and Jordan is determined to work just as hard and keep learning as he strives to emulate his mentor. And best wishes to him.