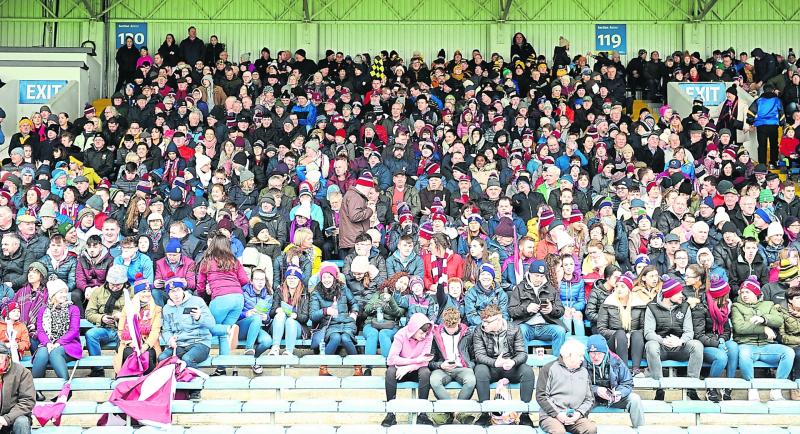 Mullinalaghta came up short, yet they exposed Crokes weaknesses at times, when long fast ball dropped onto the full back line.

But, Dr Crokes were just too good, too experienced, too long being conditioned, and too deftly accurate in everything they wanted to do. When they shoot, it’s usually a score.

Boasting several All-Ireland medal holders, their bench too, was bristling with talent. An awesome panel.

Mullinalaghta lost the game but captured many hearts in the partisan crowd of around 4,000 in Semple Stadium, a place that harks back to other days in some senses, when facilities were ran like an off handed afterthought.

The dark tunnel, without lighting, which we had to navigate after the game ended, being a treacherous health and safety issue.

Luckily GAA crowds aren’t preoccupied with compensation. We could overhear several talking about the darkness.

Strange how the GAA always falls short in some departments.

Yet, we all love it in its mediocre ways.

Crokes, at times, looked strained as they’ve never been in the championship, except when they rattled off five points without reply, with the quartet of elegant Tony Brosnan, centre back Gavin White, midfielder Daithí Shaw, and full forward Kieran O’Leary stylishly running riot, launching an unstoppable offensive before halftime. Yet Mullinalaghta remained in the game going in at the break just two points adrift, 2-3 to 0-11.

Yet, every time a high ball came into the Mullinalaghta forwards, panic seemed to seize the opposition.

The imperious Fionn Fitzgerald was magnificent throughout at full back.

At the end of the day Mullinalaghta can be proud, for themselves, and Longford.

The number of GAA clubs affiliated in Ireland in most recent study was 2,610. Being very conservative one could say half of them are hurling.

Being ultra conservative one could say the number of senior teams are probably around 10 per county.

That’s a total of 320 senior club teams competing for the Senior Club All Ireland, every year. Out of that number, four only, compete in the Club All Ireland semi-finals.

That’s a percentage of approximately 4%.

Each of the four teams therefore, belong to an elite bunch of 1% each. Mullinalaghta should think about that, and remember it forever.

The day might never again happen, or maybe it might, nobody knows really, but in a county like Longford, where the county team belongs to Division 3 currently it’s highly unlikely that the event will come again soon.

I heard many many men and women on the pitch after the Mullinalaghta/Crokes encounter saying that ‘we’ll never see the likes of it again’.