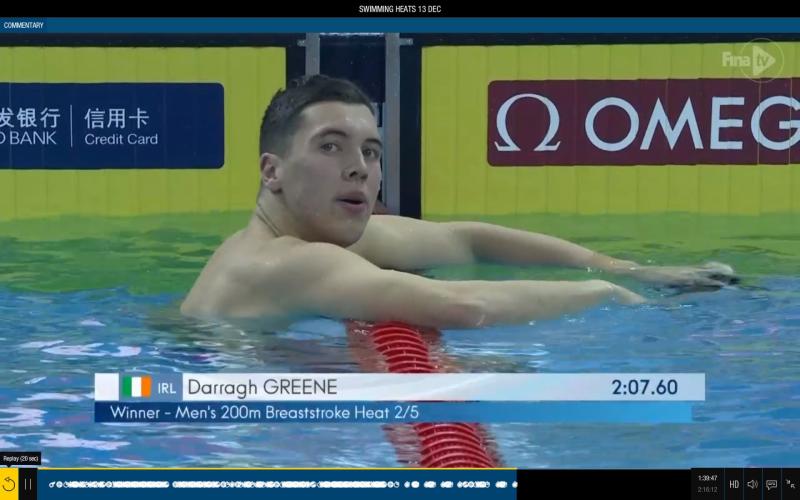 Longford's Darragh Greene after he achieved a 200m Breaststroke Irish Record on Thursday at the FINA World Short Course Swimming Championships in China.

After achieving a 200m Breaststroke Irish Record on Thursday, Longford's Darragh Greene competed in the 50m Breaststroke this morning at the FINA World Short Course Swimming Championships in Hangzhou, China and he set another personal best time at the event touching in 27.43.

The 23-year-old was also part of the Ireland men’s 4x50m Medley Team that set another Irish Record. Darragh, along with Shane Ryan (a bronze medallist in the inidividual 50m Backstroke in China), Conor Ferguson and Brendan Hyland were impressive in the second heat touching in 1:35.05, knocking .58 off the record set at the 2017 European Championships.

The time left the team in 10th place overall and confident going into the 4x100m version of the event on Sunday where they will look to break a longstanding Irish Record of 3:45.66 set in 2001 by a team that included Olympians Adrian O’Connor and Gary O’Toole.

Speaking afterwards Greene commented, "I’m delighted with my swim today. My main focus was just to work on my skills and get a pb in a morning swim. To be able to achieve an Irish Record at my first World Championships is a bonus.”

Meanwhile, competing on Day 1 in the 100m Breaststroke, Darragh Greene clocked 58.91 taking over a second off his previous best of 59.93.