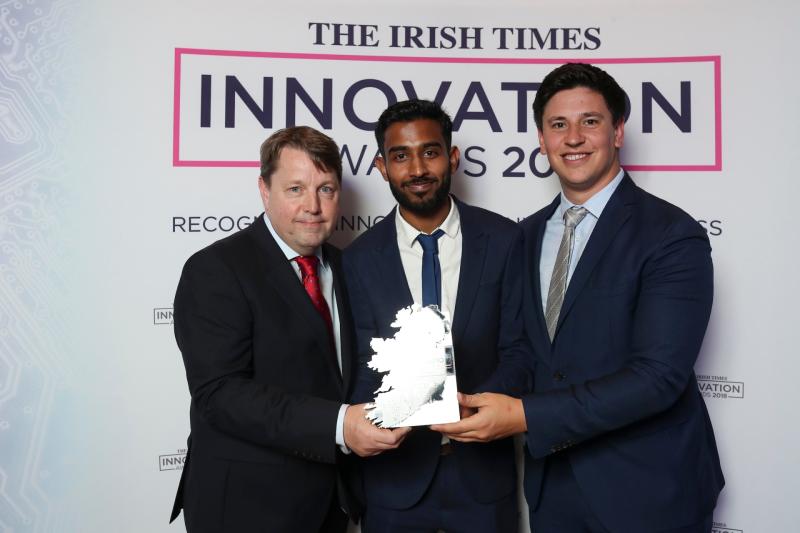 Parkpnp, which describes itself as the Airbnb of parking, wins Sustainability Category at Innovation Awards 2018

Parkpnp, a company which describes itself as the Airbnb of parking has won the Sustainability Award at the Innovation of the Year Awards 2018.
The company, which is based in Dublin, was co-founded by Garett Flower from Colehill in Longford.
The Awards, which are now in their ninth year, were presented at a ceremony attended by over 220 people at The Concert Hall, RDS, in Dublin recently. Over 270 companies registered for the Awards this year. All five category award winners receive a €10,000 Irish Times media package.
Parkpnp users can rent out car parking spaces by the hour, day, week or month, and cash in on hitherto underutilised assets.
The company launched in 2015, and has now expanded into the Belgian and Dutch markets, while it is looking to conduct its first trial in the US shortly.
CEO Garret Flower said the win was a validation of everything the company had achieved to date while also filling it with confidence for where it is going as a business.
Michael McAleer, Innovation Editor, at The Irish Times said the Awards underlined once again the importance of fostering a culture of innovation.

“It’s incredible to witness first-hand how companies all over the island are harnessing technology to provide better services and products for their customers. Many of these companies will no doubt go on to become industry leaders. Heartiest congratulations to our award winners, our finalists and indeed all who entered the Awards this year.”

“My Department recognises the role of innovation in enterprise development and is committed to providing supports that encourage its widespread application.  I would like to thank the Irish Times for providing this marvellous showcase that celebrates the very best of Irish achievement in innovation. We look forward to following the future success not just of our winners, but of all the nominees and the pioneering companies that entered the Awards.”

Company Background
The idea for Parkpnp came about as a result of Flower’s first experience driving in Dublin and his difficulty in finding parking.

The idea became a reality when Flower met co-founder Daniel Paul, who has been building apps since he was 16. Having gained backing from a number of investors including Enterprise Ireland, the company launched in 2015, and has now expanded into the Belgian and Dutch markets.

“Parking space owners can use the phone app or the website. They can rent it out hourly or for months if they wish. Users can open the app and pre-book parking before they leave home if they wish. We are talking to pubs, restaurants, hotels and local authorities around Ireland at the moment.
Parkpnp was up against Eirgrid also from Dublin and Wicklow based Ó Cualann Cohousing Alliance.

The aim of the Innovation Awards is to showcase and reward excellence in innovation across a range of products and services.
The Irish Times Innovation Awards 2018 is supported by the newspaper in partnership with Science Foundation Ireland, KPMG, Enterprise Ireland and UCD Michael Smurfit Graduate Business School.