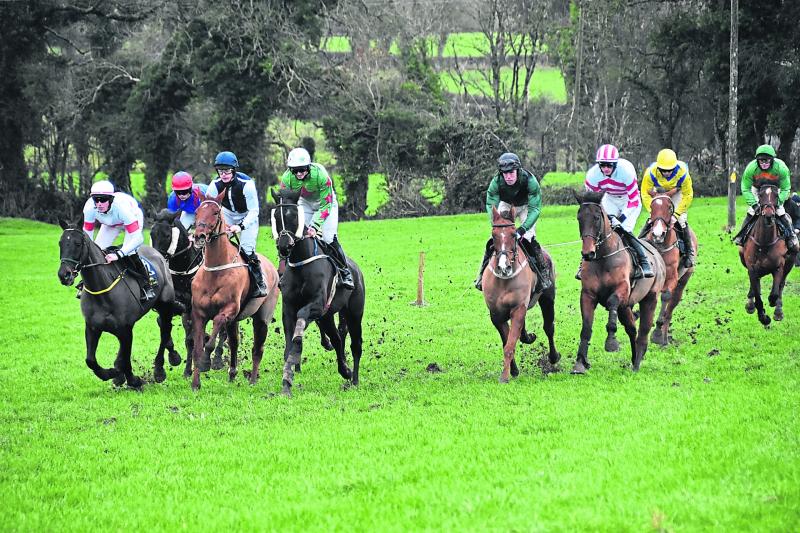 Hot on the heels of a very successful night at ‘The Oskars’, Ballinalee was, once again, the centre of attention with the staging of the annual Longford/Westmeath Point to Point race meeting at Corbeagh House.

The McGreal family, who own the venue, worked with a small and dedicated team of volunteers, including members of the local Longford Harriers, to get the track ready in advance of the event.

“Due to the large number of entries in the first race, it had to be divided,” said Linda Gallagher.

“In the first division the Mary Doyle trained Alko Rouge set a blistering pace and was over 20 lengths clear when coming to grief at the last fence.

“This left Buzz de Turcoing to land the spoils in the fastest time of the day.

“However, Alko Rouge will be one to watch as he set a very strong pace and was desperately unlucky to stumble and fall at the last.”

Meanwhile, the second division was won by the Colin Bowe trained Killer Clown providing his jockey Barry O’Neill with the first of a hat trick of winners on the day.

The other winners included Destination Dylan in the five year old Geldings maiden and Kruzhlinin, who is trained by Gordon Elliott and was sent off as odds on favourite, in the Open Lightweight.

The runner up in this race was Lisclogher Lad owned by local vet, Donagh McDonnell. Both Destination Dylan and Killer Clown are now headed to the sales.

“The standout performance of the day went to Complete Sizing,” continued Ms Gallagher. “Trained by Jim Dreaper he beat the more experienced Kadmer to take his record to four wins from four starts in point to points.

“He raced in the familiar colours of the late Alan and Ann Potts, whose Sizing John won the Cheltenham Gold Cup in 2017.

“There was an exciting finish to the five year old Mares race with La Hachette holding on to win by a short head and the days racing concluded with a win for Like A Demon who is now aimed at a Hunter Chase in Limerick over Christmas.”

During the day a minute’s silence was observed for Jim Neilon, who was always on standby to help and provide a welcoming smile at the entrance gate; Sam Murphy, who regaled members with stories of times past and was a founding member of the very successful Longford Pony Club, and Harold McGahern, a nationally and internationally recognised horse breeder and supporter of the Irish Sports Horse.

“With bookmakers in attendance and a live commentary on each race, a great atmosphere prevailed on the day,” Ms Gallagher smiled.

“Great credit must go to the McGreal family for providing such a superb and unique venue. The local community again rose to the occasion with sponsors from Longford, Ballinalee and Edgeworthstown.

The Committee would like to acknowledge all the businesses that provided sponsorship and these were recognised in the published race card.”