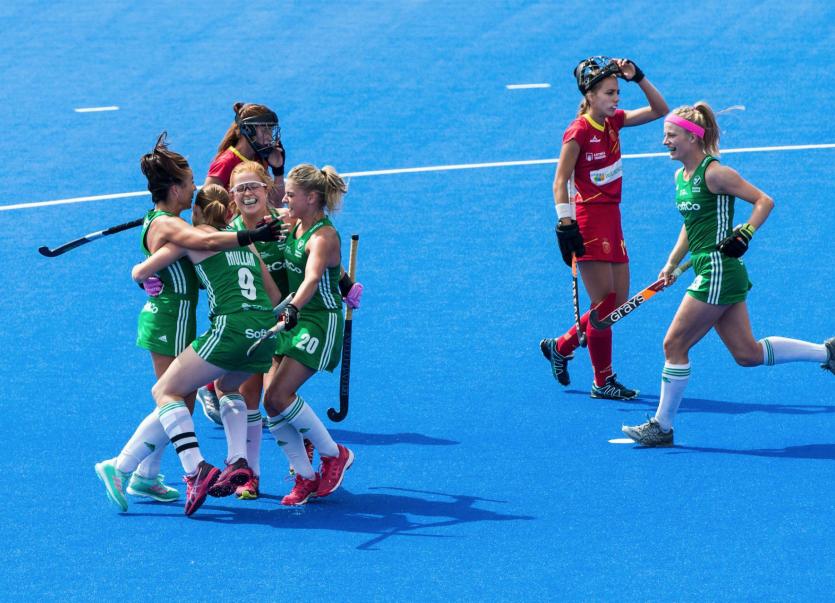 Ireland celebrate their semi final win over Spain in London

There was a great outpouring of joy on Twitter this afternoon as Longford celebrated Ireland's progression to the Hockey World Cup final.

Ireland progressed to the final of the Women's Hockey World Cup, where they meet the Netherlands or Australia, following a spectacular sudden death penalty shoot out against Spain in London.

The winning penalty came from Gillian Pinder, see above, after Ireland and Spain finished 1-1 at the end of normal time and 2-2 after their initial five penalties.

Ireland will now face either Netherlands or Australia in tomorrow's World Cup final which tips off at 4.30pm Irish time.

I am actually teary watching this.... can only imagine how those women must be feeling... 140 characters and I have no words... https://t.co/GdmowNwYB1

To reach a world cup final in any sport is unreal. Not a notion do I have of #hockey but as a nation of bandwagons we'll all be roarin for them in the final @irishhockey

Awesome news for Mna na HEireann. What a year - hats off to you inspiring women! #HWC2018⁠ ⁠⁠#COYGIG #irelandhockey

The Green Army have beaten Spain in a penalty shootout to secure their place in the World Cup Final.

It was the dream start for the Green Army as Katie Mullan sent the ball into the circle and won the first penalty corner of the game. Shirley McCay swept the ball from the top of the circle and Anna O’Flanagan slipped her marker and deflected past Maria Ruiz to give her side the lead in the 3rd minute. The pace and precision of the Green Army didn’t let up and Gillian Pinder won her side’s second penalty corner before the end of the first quarter. A straight strike from the top by Ali Meeke was well saved by Maria Ruiz as O’Flanagan lurked in front looking for another deflection. Julia Pons sent a deflection at the other end just past the post as Spain settled into the game, likewise Carola Salvatella sent an unconventional shot just wide. The Green Army defence continued their impenetrable form with Shirley McCay and Hannah Matthews frustrating the Spanish forward line and limiting any further clear cut chances. Ireland ended the half the better of the two sides with Deidre Duke sending a reverse strike inches wide and then combining with Nikki Evans to win Ireland’s third penalty corner. Matthews sweep from the top was saved by Ruiz and Ireland went in at half time holding their 1-0 lead.

It took just 2 minutes into the second half for Mullan to win her sides 4th penalty corner but the variation didn’t quite come off as McCay sent the ball to the right looking for Mullan on the post. 2 minutes later and it looked like Spain had their first penalty corner but a smart referral by Matthews saw the ball was lifted high and the Green Army won the free out. Spain began to up the pressure as the half progressed and got their equaliser in the 39th minute from a ball crossed in to Alicia Magaz who scored from close range. The stats show that Spain had 21 circle entries as they chased the winner with Lucia Jimenez sending her shot over the crossbar. Mullan won her side a penalty corner in the final 2 minutes but Zoe Wilson’s sweep was saved off the line by Rocio Gutierrez and the sides were destined for a shoot-out.

It was Pinder who was the hero as she scored her first shot and then her second in sudden death in  the 6th round. In between those two vital moments though Watkins scored in the 5th round and Ayeisha McFerran was unbeatable in 4 of Spain’s attempts. Pinder’s second goal secured the 3-2 victory and put the Green Army in their first ever World Cup Final!

Graham Shaw, head coach said “This performance was testament to the character and belief in our team. It was warm out there, and I thought we looked the stronger side in the final minutes, and that’s down to the fitness of this team and how hard they work. This is just amazing and hopefully this will be a changing moment in our sport. I could not be more proud of this team, they deserve every bit of this”.