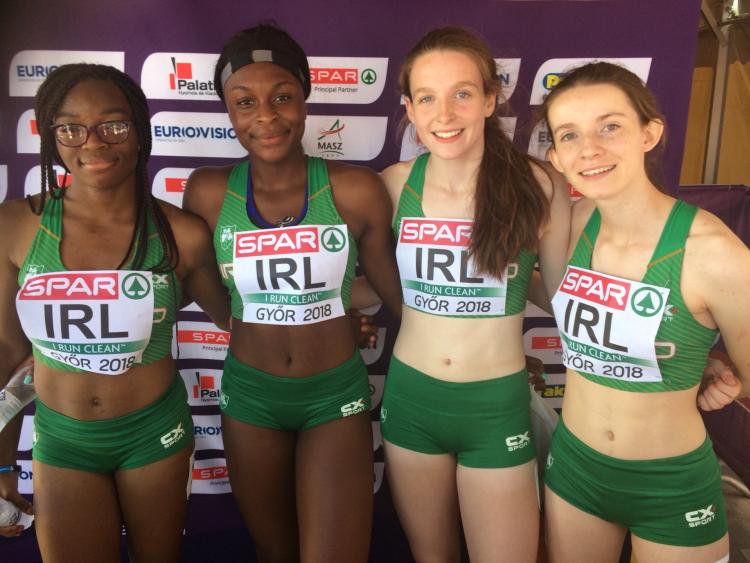 Talented Longford athlete Yemi Talabi was upbeat following her debut performance on the international stage with the Irish girls Medley Relay team that just missed out on qualifying for the European U18 Championship in Gyor, Hungary today (Saturday, July 7).

Longford Athletic Club member Yemi ran the 100 metres opening leg of the relay and the quartet was completed by Patience Jumbo-Gula (St Gerard’s Dundalk), Rachel McCann (North Down) and Simone Lalor (St Laurence O’Toole), who ran the 200m, 300m and 400m legs of the race, respectively.

The Irish girls just missed out on making the final, finishing fourth in their heat and tenth overall with a time of 2:13.64.

It provided a good introduction to international competition for some of the team and also Jumbo-Gula was delighted to be back on the track and competing after her fifth place finish in the 100m final on Friday night.

Speaking after the race, Yemi explained "I thought my start was good considering it was my first time in an international competition."

Well done to @Kings_Hospital student Yemi Talabi, selected to represent @irishathletics at the European U18 Athletics Championships in Hungary! https://t.co/CtLBsqbob4

Kings Hospital student, Yemi added, "I was trying not to panic and I thought I did pretty good."

The Irish relay team after finishing tenth overall in 2:13.64 pic.twitter.com/WJynB3IiB7

Saturday proved to be a memorable one overall for the Irish team at the European U18 Championships, with Rhasidat Adeleke (Tallaght) powering to victory in the 200m final, while Sophie O'Sullivan, daughter of Sonia, took silver after a super run in the 800m.

"You work all year, there will be doubts and things that will bring you down but coming out with the gold is crazy."

Ireland's @RhasidatAdeleke after winning gold in the 200m at the European U18 Championships. pic.twitter.com/IwQportwNL

A silver medal and a golden interview with Sophie O’Sullivan in 2:06.05 over 800m pic.twitter.com/ozpEhHNyAM

Super silver and super smiles!!! 2:06.05 for an official pb for Sophie O’Sullivan pic.twitter.com/iNdYWLKrwK