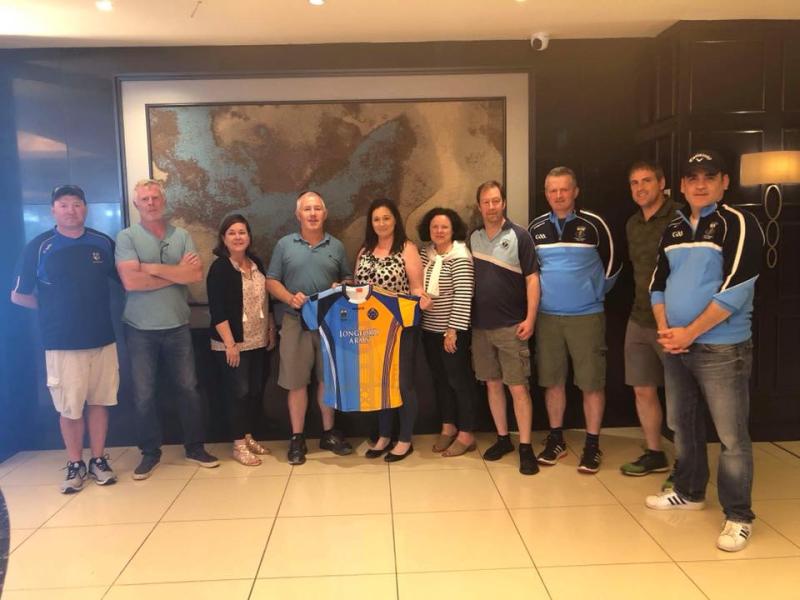 Representatives from Longford Slashers got to meet some of the San Francisco traveling contingent in their hotel in Athlone & presented them with the beautiful commemorative jersey.

For players, and indeed, former players, Féile na nGael and Féile na nOg conjures up great memories and experiences that will remain for a long time and this year Longford Slashers and Wolfe Tones have the honour of hosting hurling and camogie teams in the National U-14 competitions.

The hurling and camogie U-14 Féile is taking place in Connacht on June 8, 9 and 10 but Longford and Westmeath clubs have been asked to host participating teams.

“Most of the top clubs are based in Galway but it’s great to be given the chance to host a club. We have had great experiences ourselves when we went to An Spiddal and Carlow before in the Féile.”

Slashers will be hosting the San Francisco U-14 hurlers, the only team from the United States to come over for the Féile.

“It is great for the club and the town to host San Francisco. It will give us a chance to sell our town and the areas around it.

“It’s a huge honour. They are the only club coming over from America for the Féile hurling and they are really looking forward to the trip to Ireland.”

Wolfe Tones Mostrim will play host to Monaghan side Clontibret with the game scheduled for Friday, June 8 and the two Longford clubs are drawn in the same group. “Slashers and Wolfe Tones will play each other with the first games in Devine Park in Edgeworthstown and we are really looking forward to it.”

Ward is hoping these games being played in Longford will help promote the game in the county.
“We have three senior clubs in the county and only two underage clubs. It would be great if more people would get involved in the game.

“Slashers have a camogie club and it’s great to see Wolfe Tones setting one up too. We need to get more interest in the game.

“We have to go outside the county for competitive games and it would be great to have more games in Longford.”

With the games on people’s doorsteps Niall is hoping the people of Longford will come out and lend their support to the Longford clubs.

“It would be great if people came out to watch the games. Féile is a fantastic competition and the games are of a high quality. It would be nice for the hurling and camogie players to have crowds at the games.”