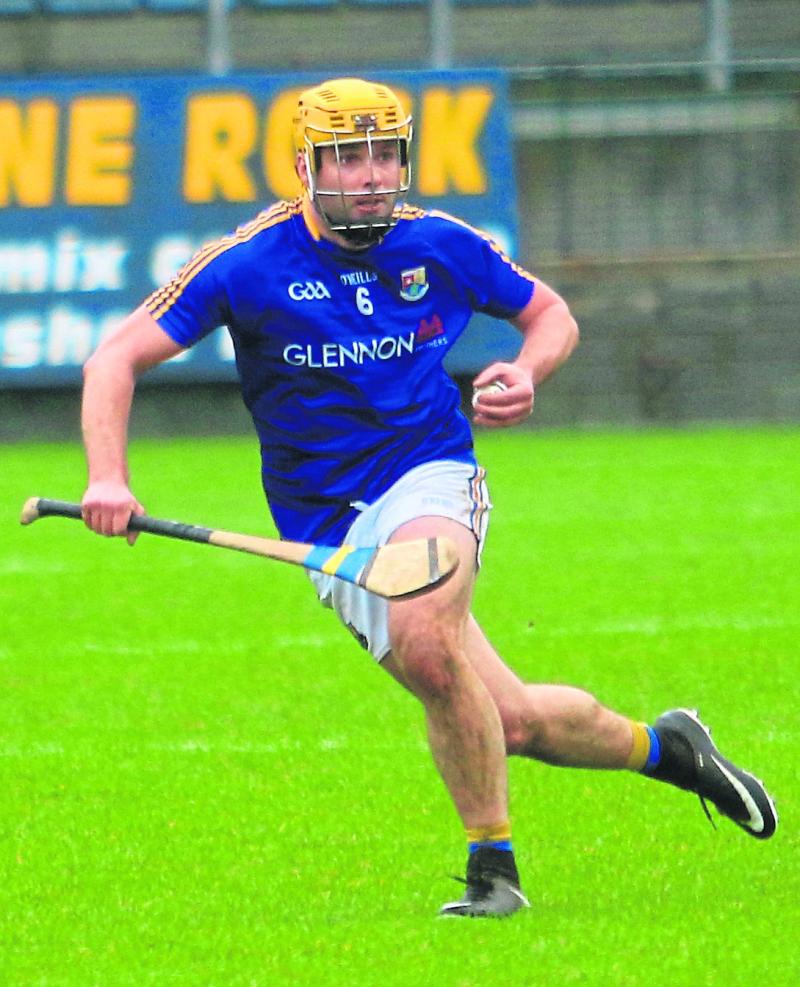 Seamus Hannon in action against Warwickshire at the weekend

Longford are still looking for their first victory in this season's National Hurling League after going down to Warwickshire in Birmingham on Saturday afternoon last by six points, 1-14 to 0-11.

The home side’s victory was all the more notable considering they played for over half an hour with fourteen men after Donal Nugent’s red card at the start of the second-half.

After the previous week’s away win in Tyrone, Warwickshire looked to be full of confidence as they took the game to Longford early on.

An opening point from Nugent was soon followed by the only goal of the afternoon when Niall Kennedy cleverly pinched possession to feed a waiting Kelvin Magee who batted home from five metres out, 1-1 to nil.

Patrick Walsh struck back for Longford but things looked to be going from bad to worse when Magee was hauled down for a penalty. However, the visitors breathed a sigh of relief when the sliotar fizzed wide of Conor Gallagher’s left-hand upright.

At the other end Reuben Murray was unable to steer a rebound into the net after Daniel Connell’s long drive dropped into the goal mouth but with Kennedy pulling the strings at half-forward Warwickshire opened up a handy lead with three points in quick succession: Paul Uniacke ended a powerful run with a point from the right flank, before scores by Kennedy and Caulfield (free) turned the screw on Longford, 1-4 to 0-1.

A superb steal from Michael O’Reagan presented Kennedy with the chance to lash over a superb point from long range as the game moved into a phase of point trading before the interval.

Two points (one free) from Niall McKenna sandwiched a third point from Kennedy as the first-half concluded with Warwickshire six points to the good, 1-8 to 0-5.

Yet that advantage came under threat when Nugent was shown a straight red just three minutes into the restart. Longford tried to seize the initiative as both Cathal Mullane (free) and Bart Hanley landed scores and when substitute PJ Masterson burst down the left an enticing pass across the face of goal went unconverted.

Warwickshire needed to take the sting out of any potential fightback and an incredible first-time flick by Breen Fallon resulted in a much needed point that was soon followed by an excellent long range point by Magee.

Longford were still pressing as the game moved into the twilight of the final quarter. Sean Stakelum went close to grabbing a goal with a near post strike, while Mullane kept the scoreboard ticking over with three further points (two frees). Yet a resolute Warwickshire full-back line refused to wilt as the visitors threw fresh legs into their full-forward line, leaving Longford to settle for incremental points as time started to run out.

At the other end a rejigged attack line did its utmost to relieve the pressure and generate scoring chances as two late frees from McKenna and Caulfield kept Longford at arm’s length. Despite a final rally on the Warwickshire goal, Stakelum could only lash over the bar in a final response from the visitors, to leave Longford still searching for a first win as attentions turn to their third game in Division 3A away to Roscommon.