Longford hurlers unlucky to lose out against Monaghan

Colum O’Meara's side look to bounce back against Warwickshire 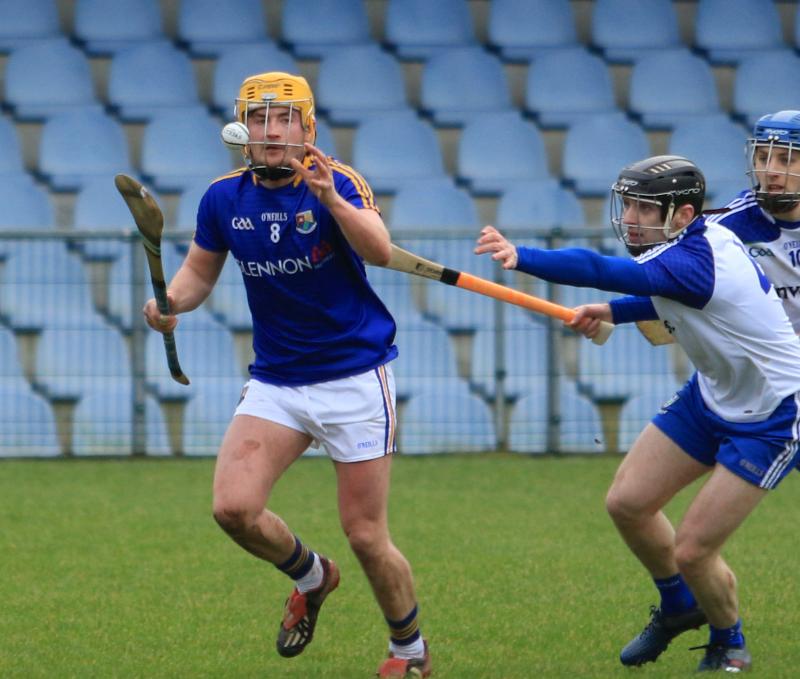 Johnny Casey pictured in action for the Longford hurlers against Monaghan in the National League Division 3A game at Glennon Brothers Pearse Park on Sunday last. Photo: Syl Healy

Longford hurlers opened their National League campaign with a four point defeat against Monaghan at a blustery Glennon Brothers Pearse Park last Sunday and while the result did not go their way, their manager Colum O’Meara and his backroom team should be reasonably pleased with the performance.

O’Meara will be only too well aware that the game was there for the taking but after full-forward Sean Stakelum was sent-off for a second bookable offence, it proved to be a significant setback for Longford.

Once Longford were reduced the 14 men, Monaghan quickly capitalised and four unanswered points in the closing exchanges ensured the visitors would come away from Pearse Park with the win.

Up to the point of the sending off, Longford appeared to be on top in all the key areas of the pitch. Their centre-half-back Bart Hanley showed great strength and composure in defence and made some critical interceptions over the course of the game.

Goalkeeper Conor Gallagher was flanked very well by his full-back line and when he was called into action midway through the second half, he displayed tremendous bravely by throwing himself in the line of fire from the only real Monaghan goal opportunity.

Longford have relied heavy on their two chief scorers Cathal Mullane and John Mulhern in the past and Sunday’s encounter was no different. Mullane accounted for seven of Longford’s tally while Mulhern added three excellent points from open play with centre-half-forward Patrick Walsh also hitting a brace of white flag efforts for the ‘blue and gold’.

The home side registered the opening score in the second minute. Roving full-forward Sean Stakelum tested the Monaghan keeper with a goal chance effort and on the second occasion John Mulhern tapped over from close range.

Longford battled diligently against the wind and a brace of points from Patrick Walsh and Cathal Mullane kept them in contention. Monaghan, for their part, continued to apply the pressure and a haul of points from their potent free-taker Fergal Rafter ensured them a three point cushion at the break, 0-10 to 0-7.

Conor Flynn and their midfield general Mark Treanor supplied all their first half points from open play for the Ulster side while corner-back Jamie Guinan also got in on the scoring act when he drifted into an attacking position to land a point.

After the break, it was Longford’s turn to take advantage of the wind but they allowed Monaghan to dictate the early proceedings.Their wing-forward Conor Flynn continued to cause a serious threat and he picked off the opening second half score inside the fourth minute.

Soon after, Longford settled down and three points in quick succession from Cathal Mullane, John Mulhern and Patrick Walsh brought the home side right back into contention.

Longford appeared to be on course for victory but things took a sudden turn for the worst when Sean Stakelum was given his marching orders. With the extra man advantage, Monaghan looked revitalised and when Fergal Rafter hit his second point soon after the balance of favour tilted into Monaghan’s direction.

In the closing minutes the visitors continued their purple patch and Conor Flynn and wing back Martin Murphy registered points in additional time to seal a hard earned victory.