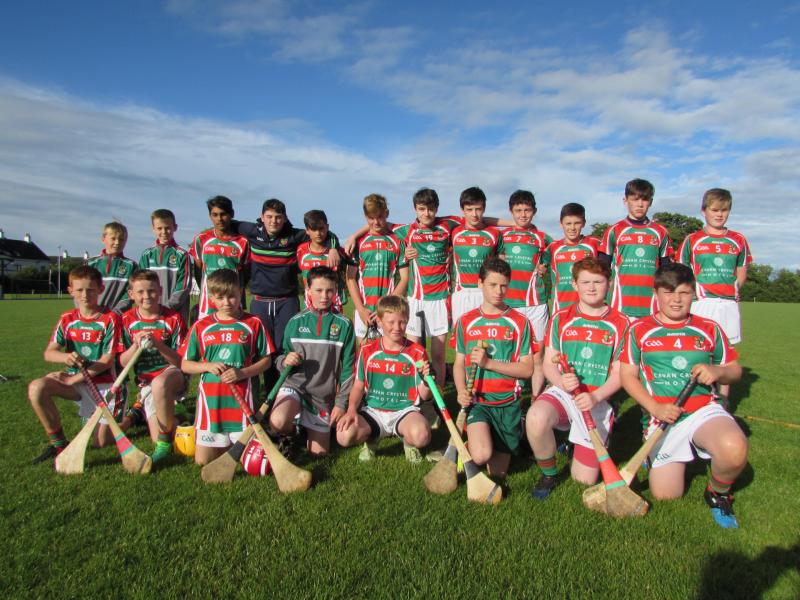 The Wolfe Tones team who captured the U-14 hurling championship title. Photo by Jimmy Connell

Wolfe Tones won back the U-14 hurling championship title on Wednesday evening last with an impressive 12 point victory over rivals Longford Slashers.

Played in windy conditions at Hugh Devine Park, the Edgeworthstown side went into the game as underdogs having lost out to Slashers in last year’s final and also in this year’s Feile final but they never looked like losing this game.

Slashers have been boosted this year with the addition of several Clonguish players and looked a strong bet to retain their title.

However it was Wolfe Tones that were out of the blocks early and they opened up an early 5 point lead before Slashers opened their account.

Liam Browne was excellent throughout from the placed ball and punished Slashers at every given opportunity with 6 points from frees.

Wolfe Tones were dominating in every position with Alex Fahy at full back snuffing out the few chances that Slashers were able to create.

A well taken goal from Ronan Courtney stretched the lead and two fine points from play by Padraig Dempsey and James Connell helped Tones go into the break with a 1-08 to 0-02 lead.

If Slashers were to get back into the game they needed a bright start to the second half and indeed they got the first two points to narrow the gap.

But Wolfe Tones regrouped quickly and slotted over a free from Browne and a point from play by Marcus Curma who was making strong runs at the Slashers defence during the entire game. The same player got a fine goal shortly after to extend his sides advantage to 11 points.

The Tones midfield pairing of Ali Iqbal and Tomas Walsh were very impressive and it was Walsh who set up James Connell for a very well taken goal midway through the half.

This was a huge setback to Slashers and while they did finish strongly and got two late goals they were merely a consolation as Tones added another major of their own as well as two further points to ensure they recaptured the title they last won in 2015.