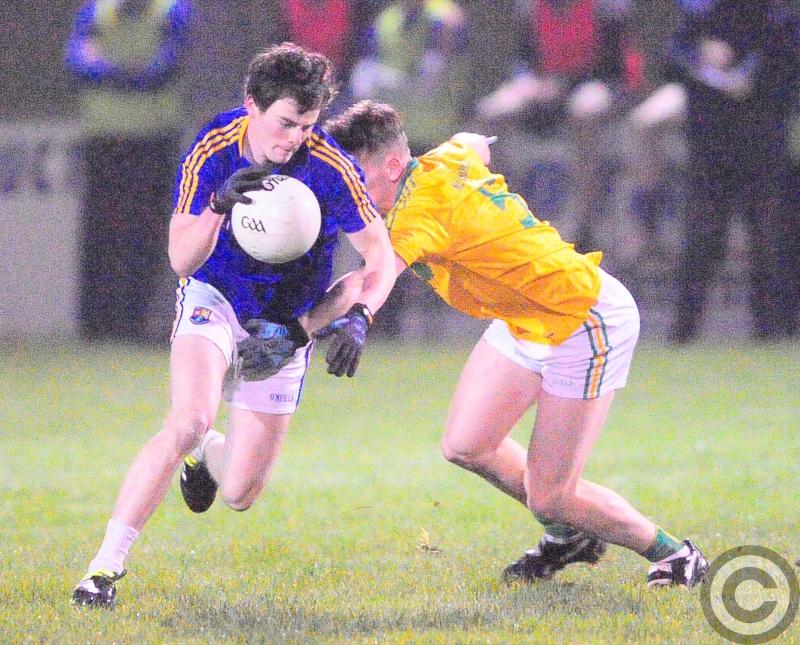 Rian Brady on the attack for Longford against Leitrim in the Hastings Cup Under 21 Football Tournament semi-final at Allen Park, Newtownforbes on Friday night. Photo: Declan Gilmore

Despite conceding three goals in the second half, Longford still managed to come out on top against Leitrim in the highly entertaining Hastings Cup under 21 football tournament semi-final with the local derby attracting a big attendance to Allen Park, Newtownforbes on Friday night.

Frank McNamee’s side trailed by four points (3-8 to 1-10) with just eight minutes of normal time remaining but got right back into contention with a decisive goal from a penalty converted by Nigel Rabbitte and three points followed through David McGivney (two frees) and substitute Robbie Clarke to clinch a fine victory.

Even though they were reduced to 14 players when another replacement Cillian Lee was sent-off for a second yellow card offence in the 58th minute, Longford finished the stronger and can now look forward to a crack at Meath in the Hastings Cup final next weekend.

After suffering the significant setback of losing midfielder Shane Kenny, who was forced to retire injured with just two minutes gone in the game, Longford were still good enough to establish what appeared to be a comfortable 1-7 to 0-6 lead at the break with Aidan McElligott getting the vital touch for the goal in the 26th minute.

David McGivney (three frees) and a brace apiece from Rian Brady (free and play) and Dessie Reynolds (play) accounted for the Longford points in the first half and the lead was extended when Darragh Doherty shot over the bar immediately on the changeover.

While Leitrim came storming back with goals from Robbie Cunningham (42 mins), Jack Heslin (44 mins) and Oisin Madden (51 mins) to hit the front, Longford managed to remain in touch thanks to good scores from David McGivney and Rian Brady.

Showing a lot of character, the home county regained the upper hand to score 1-3 without reply in the closing stages to book their place in the Hastings Cup U-21 title decider against Meath who beat Cavan 2-9 to 1-8 in the other semi-final on Saturday.