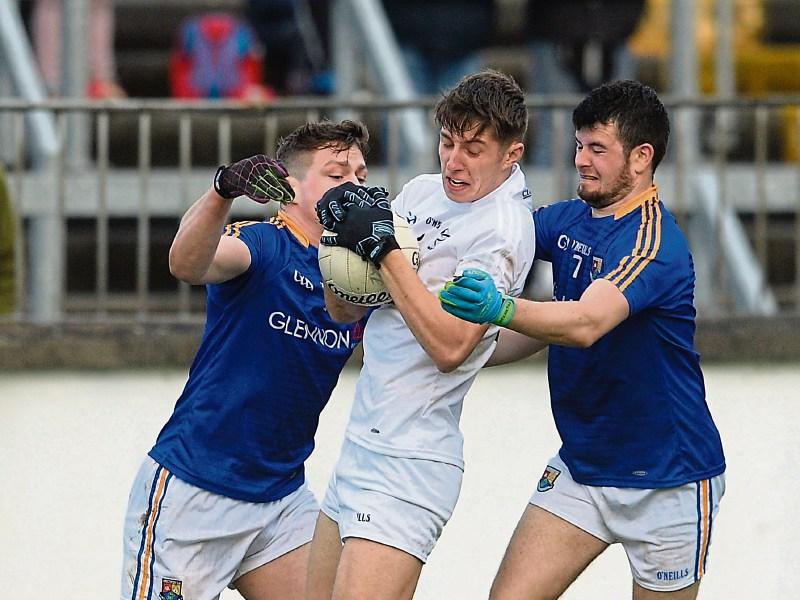 Despite a strong start Longford eventually fell to a six point defeat against Kildare in the Bord na Mona O’Byrne Cup Senior Football Tournament Round 1 game at St Conleth’s Park in Newbridge on Saturday last.

Denis Connerton’s side led by three points at one stage of the first half but a goal from Niall Kelly in the 30th minute put Kildare ahead for the first time in the game and it was a lead they didn’t let slip.

Fionn Dowling followed up with two pointed frees to give the Lilywhites a three point advantage at half-time; 1-7 to 0-7.

Kildare had opened up a seven point lead by the 48th minute and while Longford cut the gap to four with time running out, the home county hit over two late points to clinch a comfortable win.

Longford suffered a significant setback when midfielder Darren Gallagher was sent-off in the 54th minute after receiving a second yellow card.

Welcoming back Sean and Padraig McCormack to the fold, Longford gave Liam Sullivan his first senior start. Paddy Kiernan and Gary Rogers also made their senior debuts while John Keegan made a return, coming on late in the second half.

A free from Sean McCormack in the 4th minute, after Mark Hughes was fouled, was the opening score of the game. Longford had a goal chance just after when Darren Gallagher played a perfect pass into Robbie Smyth but he dropped the ball and Liam Connerton couldn’t connect with the loose ball.

Kildare’s opening point was a free from Neil Flynn in the 6th minute. A Paddy Collum ’45 and a neat point from Robbie Smyth put Longford ahead by two in the 9th minute. A pointed free from Sean McCormack put three between the sides in the 20th minute and while Kildare closed the gap there was three in it again in the 28th minute when Smyth fired over a lovely point.

A Ben McCormack point in the 29th minute was quickly followed by a goal from Niall Kelly after Longford gave away possession in their half forward line and Kildare punished that mistake. Two Fionn Dowling frees put Kildare in front by three points at the break.

Conor Hartley gave Kildare a four point lead in the first minute of the second half. Minutes later Longford created a goal chance but Sean McCormack was unlucky to see his powerful shot come off the post and Kildare cleared the danger.

Kildare went on to add three more points to their tally and their strong forward division looked likely to score every time they went on the attack. Longford’s first point of the second half came in the 48th minute when Robbie Smyth kicked over a neat score and he converted a free two minutes later.

Hartley was on the scoresheet again in the 53rd minute and Longford were then reduced to 14 men when Darren Gallagher received a second yellow card.

Sean McCormack was on target again in the 57th minute but Kildare replied with a pointed free from Neil Flynn. A nice point from substitute Gary Rogers and another fine McCormack score cut the deficit to four points with two minutes of normal time remaining.

Fionn Dowling and Ben McCormack kicked over late points for Kildare to leave six between the sides in the end and Longford will be hoping to bounce back from this defeat when they meet Offaly in Round 2 of the O’Byrne Cup in Newtowncashel this Wednesday night, throw-in 7.30pm.