Mullinalaghta defeat Killoe to move a step closer to the double 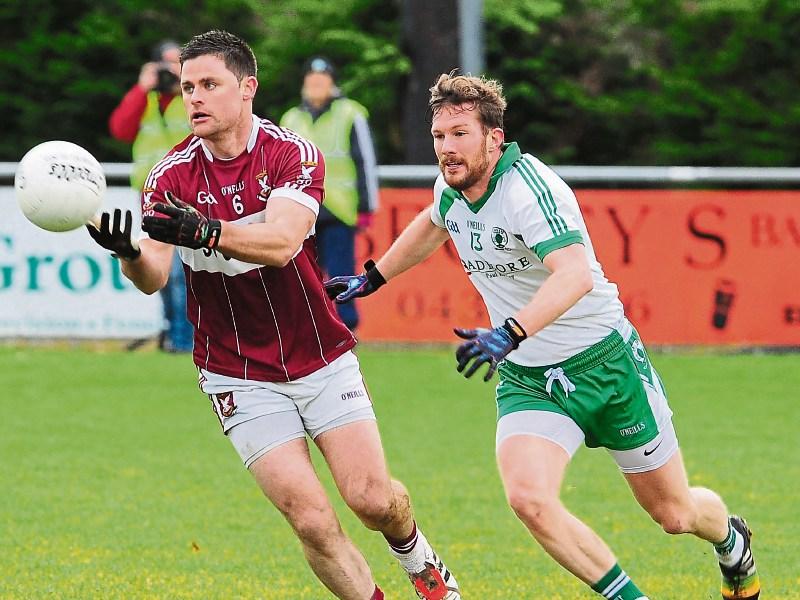 The Championship and Leader Cup double is on for St Columba’s after the Mullinalaghta men  defeated the title holders Killoe in the senior football league semi-final at Emmet Park on Sunday last.

In a tight game, the sides were level five times but the turning point came in the 54th minute when Padraig McCormack brought down Aidan McElligott in the square and referee Aidan Dowler awarded a penalty.

McCormack received a black card and McElligott’s brother Donal duly dispatched the penalty past Killoe keeper Cillian Burns. John Keegan then hit over a point one minute later to put five between the sides and that’s how it finished.

Having had no competitive game for a few weeks it was no surprise that the Killoe side looked lethargic at times. Mullinalaghta, on the other end, were buoyed up for this game after a wonderful run in the Leinster Club Championship. They had also beaten Emmet Og in their two previous meetings this year; league and championship. Both sides were missing players for this clash.

A free from David McGivney and a lovely Jayson Matthews point gave Mullinalaghta an early two lead inside the opening two minutes. Denis McGoldrick replied for Killoe before a Matthews free restored his side’s two point advantage in the 5th minute.

Two points in quick succession saw Killoe level the game in the 12th minute but Mullinalaghta hit back with a fine point from Gary Rogers and a David McGivney free. Killoe levelled again with points from Denis McGoldrick and Cian Farrelly but were dealt a significant blow in first half stoppage time when midfielder Paddy Thompson was sent off for a second yellow card offence.

Early second half points were traded between James McGivney and Sean McCormack before substitute Conor McElligott edged Mullinalaghta ahead by a point in the 45th minute.

Once again McCormack and McGivney exchanged terrific scores before Mickey Graham’s side went two ahead in the 49th minute.

Entering the final 10 minutes of the game the sides were level again after points from Denis McGoldrick (free) and Sean McCormack. In the 53rd minute Mullinalaghta went ahead again and this time they held on to the lead. After some excellent work from James Mooney to gain possession, the corner back went down the wing and played the ball into James McGivney who landed a point.

One minute later Mullinalaghta were awarded a penalty and Donal McElligott slotted the decisive kick into the back of the net to settle the issue. Killoe lost Padraig McCormack through a black card offence and the momentum was now with Mullinalaghta with John Keegan shooting over the bar in the 55th minute.

Killoe tried in vain to rescue the situation but Mullinalaghta’s work-rate was terrific with Gary Rogers coming back to help out his resilient team-mates in defence.

Despite Emmet Og having chances, they could not get the scores they needed and St Columba's now go on to meet Clonguish in the Leader Cup Final on Sunday next.