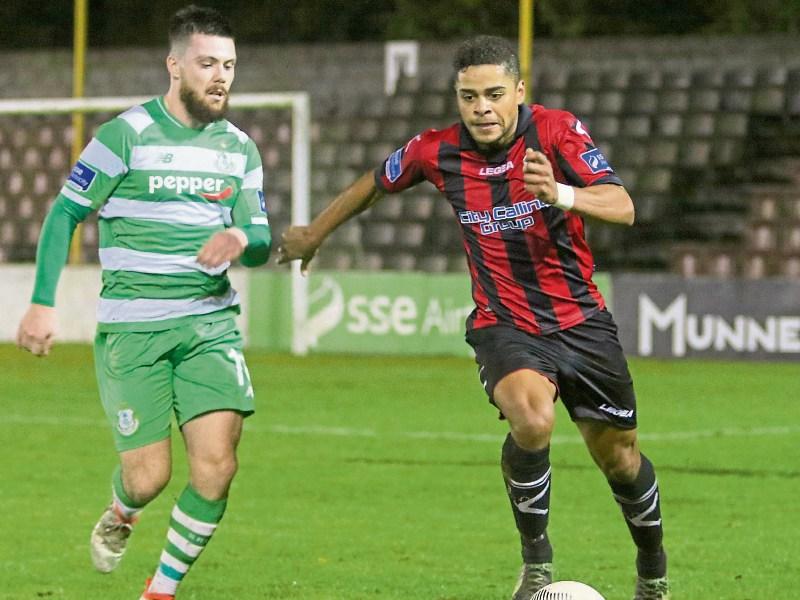 The same problems that have hampered Longford Town all season were evident once again in their final Premier Division game of the season that ended in a disappointing defeat against Shamrock Rovers at City Calling Stadium on Friday night last.

The Town took an early lead and were playing well but captain Conor Powell was sent off for hand-ball on the line in the 37th minute and Shamrock Rovers levelled from the resulting penalty. Rovers went ahead in the 49th minute and then got a third two minutes later. Longford did pull a goal back but Rovers got a fourth in the 64th minute.

Some of the play and defending for the goals that were conceded was poor and this result meant relegated Longford Town finished the game without a win at home in the league all season. Speaking to the Leader after the game Town manager Alan Mathews admitted the game was a reflection on how the season had gone for the club.

“I’m looking at the game and thinking is this the same team we played against for the first half hour and it was. We just dropped our standards in keeping the ball, trying to get the ball back and the concession of soft goals. It’s disappointing when you score two goals at home and you still don’t take anything from the game. That appears to be a fair reflection of the season. “

After a bright start the Town took the lead in the 9th minute when Kealan Dillon’s cross was headed to the net by Mark Hughes. Don Cowan had a chance shortly after to double the advantage but he shot straight at Rovers keeper Barry Murphy.

In the 37th minute Conor Powell was dismissed after he handled the ball while under pressure on the goal line and Rovers were awarded a penalty which Gary McCabe duly dispatched to the net.

Four minutes into the second half Shamrock Rovers hit the front when Aaron Dobbs header was adjudged to have crossed the line by assistant referee Robert Clarke after the Town had tried to clear the danger. Two minutes later Brandon Miele scored with a stunning long range strike to extend the lead.

The Town pulled a goal back in the 57th minute when Kaleem Simon’s free-kick was toe poked home by David O’Sullivan but Miele restored his side’s two goal advantage in the 64th minute when he found the net from a 40 yard free-kick.

Longford didn’t trouble Rovers after that and the biggest cheer of the game was for Town defender Pat Flynn, who has decided to retire, as he got a standing ovation from both sets of supporters when he was substituted in the 76th minute to mark the end of his distinguished soccer career.

For Alan Mathews the stat of no home win all season sums up the year the club have had: “It’s just not acceptable. Everyone has to take responsibility for that. We have to try and fix this going forward. We are in a different league next year. It’s deeply disappointing and that’s something that we don’t want to dwell on. We have to move on.”

On the topic of next season in the First Division, Mathews admitted he was staying with the club and has already been making plans. He has identified areas he wants to improve and he will be talking to some players already at the club and try to persuade them to stay.

He said: “We have got to make sure the players that come into the club have the right character and a willingness and hunger to work as hard as they can to get the club back up. We will plan and get ready for next season as quickly as possible.”