Mullinalaghta out to make their mark in Leinster 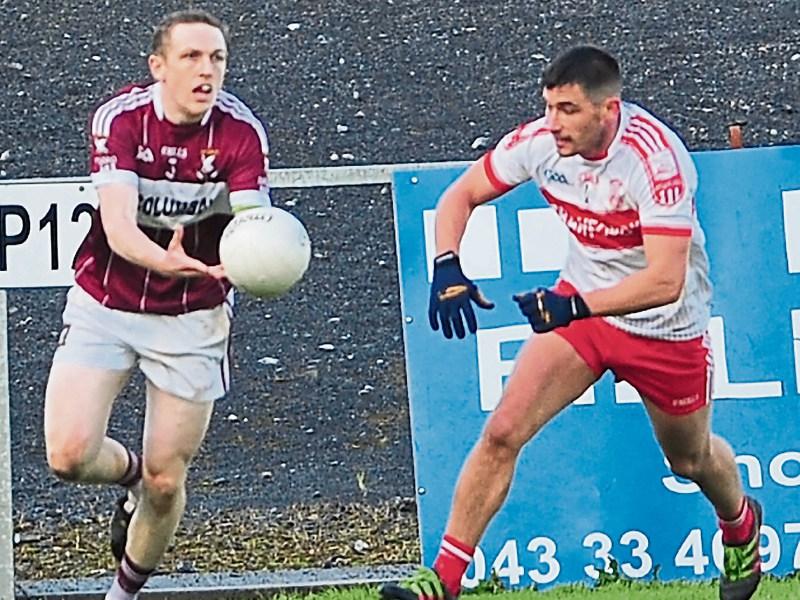 In the aftermath of their magnificent achievement in winning the county SFC title for the first time in 66 years, Mullinalaghta are now preparing for a historic first ever appearance in the Leinster Club Senior Football Championship and are capable of making their mark.

Providing the opposition in the eagerly awaited opening round clash at Glennon Brothers Pearse Park on Sunday next (throw-in 2pm) are the Laois champions Stradbally, who scored a shock win over Portlaoise in the final on the same day that St Columba’s were crowned the new kings of Longford football after overcoming Abbeylara.

In a most dramatic end to the Laois SFC title decider, Stradbally were two points down with time almost up but a string of precise hand passes in a wonderful move that started in the defence yielded a sensational matchwinning goal from Jody Dillon in the second minute of stoppage time.

A stunning strike from Dillon ended up in the back of the net as Stradbally snatched victory on a 2-10 to 1-12 scoreline to claim the county title that the club last captured back in 2005 and they will be returning to Leinster Championship action in a fairly confident frame of mind.

Beating powerful Portlaoise (who were attempting to complete a remarkable ten-in-a-row) was not supposed to happen but it did and Stradbally (who were winning the Laois senior football title for the 16th time) will now believe that they can master Mullinalaghta at Pearse Park on Sunday next.

Having said that, it is interesting to note that Stradbally were stuck in the relegation play-offs in 2014 and 2015 but managed to survive and have improved beyond recognition this season under the guidance of influential manager Martin Murphy.

Offaly native and Gracefield clubman Murphy is back in charge for a second stint and ironically he was also the Stradbally supremo when they last won the Laois senior championship eleven years ago, losing out narrowly to Rhode (1-6 to 0-6) in the Leinster Club quarter-final.

Murphy returned this year in a bid to energise a team that seemed on a collision course with the Intermediate Football Championship.

“The first thing I noticed was that there was probably a lack of self belief and confidence in the players. Stradbally are traditionally a strong football club and they always had quality players so it was a mystery to me why there were playing so poorly. The first thing I wanted to do was to get more self belief into the players,” said Murphy in the Leinster Express.

The Stradbally manager has achieved that task impressively and now has his sights firmly fixed in plotting the downfall of Mullinalaghta.

Stradbally’s best known footballer is Colm Begley, a regular on the Laois senior team, and he was considered good enough in his younger days to play professional Australian Rules Football with St Kilda back in 2005 and then transferred to Brisbane Lions before eventually returning home.

Now  30 years of age, Begley has represented Ireland in the International Rules Series and is the driving force at centrefield on the Stradbally team who will obviously be hoping to make a positive impact in the Leinster Club Championship.

Gary Comerford is the playmaker at centre-half-forward and the chief marksman made a major contribution in the unexpected win over Portlaoise, clocking up a total of 1-5 (three frees).

While Comerford is clearly the Stradbally dangerman, he is also a talented soccer player with Cobh Ramblers who are currently involved in the Airtricity League First Division promotion play-off against Drogheda United in a very demanding schedule for the extremely fit personal trainer.

Full-forward Jody Dillon, the hero in the county final success, is also a threat while another key member of the Stradbally squad is the experienced Colm Kelly who did not start against Portlaoise in the county final due to injury but he was brought on in the 59th minute.

Kelly was a member of the Laois minor football team that won the All-Ireland title back in 2003 and also featured in the 2006 Leinster U-21 success when his county beat Longford 0-9 to 0-7 in the final at Pearse Park.

Current Mullinalaghta captain Shane Mulligan also played in that U-21 provincial decider ten years ago and he will be hoping to gain some measure of revenge on this occasion.

Mulligan will link up with Donal McElligott and Conan Brady in a strong half-back-line that played a big part in St Columba’s march to senior championship glory while the battle for midfield supremacy is going to be a vital factor in the eventual outcome against Stradbally.

If John Keegan can produce another man of the match performance, as he did in the county final win over Abbeylara, then Mullinalaghta could make further progress in Leinster in the bid to earn a crack at the Westmeath champions, St Loman’s or Tyrrellspass, in a home quarter-final.

While there are injury concerns over the other St Columba’s midfielder Ruairi McElligott, who was forced to retire ten minutes into the second half of the county final, their attack have the ability to get the vital scores against Stradbally.

James McGivney, in particular, will be very determined to make his presence felt with Gary Rogers, David McGivney, Jayson Matthews, Aidan McElligott and Rian Brady also poised to pose problems and the home comfort of playing at Pearse Park might well swing the game  in favour of Mullinalaghta.