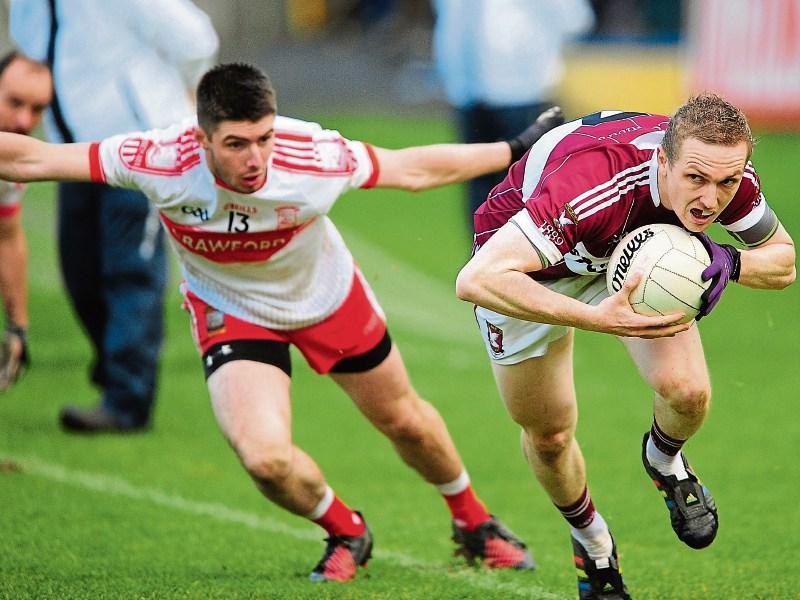 Mullinalaghta had shown a fierce desire this year in the quest to win the county senior football championship for the first time since 1950 and after knocking out the title holders Killoe in the semi-final, St Columba’s finished the job at Glennon Brothers Pearse Park on Sunday last.

Three points behind at one stage in the final against neighbouring rivals Abbeylara, the mighty Mullinalaghta men refused to panic despite kicking a total of six wides in the first half. And after trailing by 0-5 to 0-3 at the break they struck for the decisive only goal with less than a minute gone on the changeover.

It was a big turning point in such a tight contest and there was no stopping full-forward Aidan McElligott who blasted the ball to the net from close range after receiving the perfect pass from Gary Rogers for the match winning score that separated the sides at the final whistle.

So for the first time in the match St Columba’s were in front and were unquestionably the better team throughout the second half as the north Longford club situated on the Cavan border ended a very long wait of 66 years to be crowned the kings of Longford football - their third county senior title triumph.

And to make it an even sweeter success the coveted Connolly Cup has ended up in Mullinalaghta for a historic first time as the trophy was only first presented in 1960.

There were many heroes all over the pitch for St Columba’s but powerful midfielder John Keegan was the player who really stood out in the second half in driving his side on to championship glory and he was a deserving winner of the man of the match award.

With Keegan in command, the Mullinalaghta attack received a constant supply of the ball and while another six wides were kicked, corner-forward Jayson Matthews came good when it mattered to fire over two cracking points from play midway through the second half.

And then in a strong finish David McGivney kept his composure to convert three frees in a row, much to the sheer delight of the enthusiastic St Columba’s supporters, and there were ecstatic scenes when referee Patrick Maguire blew the

Great credit to Cavan native Mickey Graham, the manager of Mullinalaghta, for the excellent job that he did  in getting the men in maroon and white over the line and when the celebrations are eventually over the new Longford champions will be focused on the Leinster Club first round game against Stradbally (Laois) at Pearse Park on Sunday week, October 30th.

Stradbally scored a shock win over Portlaoise (going for ten-in-a-row) in the county final on Sunday last, thanks to a dramatic winning goal in stoppage time, and this unexpected result must give Mullinalaghta a decent chance of making some progress in the provincial series.

The terrible weather on a wet and windy day threatened to completely spoil the Longford title decider played in difficult conditions but thankfully the rain stayed away for the duration of the generally scrappy match watched by an attendance in the region of 3,000.

Abbeylara played with the wind in the first half and got off to a great start to lead by 0-3 to 0-0 with their points coming from Robbie Smyth (a terrific strike from a tight angle), Colm P Smyth and Jason Kelly (free) before Mullinalaghta opened their account in the 10th minute when wing back Donal McElligott shot over the bar.

Soon after Robbie Smyth was on target again for last year’s beaten finalists, landing a brilliant long range effort, and St Columba’s then squandered a number of good chances (including a Jayson Matthews free) before they got their second score in the 20th minute.

Chief marksman David McGivney, who made a big contribution to the title triumph with a total of five points (four frees), found some space to register his solitary score from play but Abbeylara restored their three-point lead when Robbie Smyth fired over a free in the 24th minute.

Mullinalaghta had the last say in the first half when David McGivney converted a free in front of the posts and they might have snatched a goal in stoppage time when the ball broke in front of Gary Rogers but the contact was not the best as he shot wide from close range.

Thus Abbeylara held a slender 0-5 to 0-3 advantage at the break and were also guilty of some poor finishing in the first half in shooting five wides.

St Columba’s found themselves in a good position with the significant wind now in their favour on the changeover and direct from the throw-in a well-worked move yielded the goal for Aidan McElligott that had a huge bearing on the eventual outcome.

That was really putting it up to Abbeylara in delivering a big blow to their otherwise solid defensive gameplan, although they did get back on level terms when Nigel Rabbitte landed a brilliantly struck point in the 38th minute.

Mullinalaghta then missed another few chances, with James McGivney

unlucky when his shot for a point hit the upright, but the relentless pressure eventually told with a brace of points from Jayson Matthews in quick succession - the first in the 45th minute.

The gap was closed to the minimum of margins (1-5 to 0-7) when Robbie Smyth converted a close range free in the 51st minute, awarded after he was fouled by Donal McElligott who got booked in what was one of quite a few yellow cards issued by the competent  referee.

A draw was looking possible  at this late stage but Mullinalaghta were in no mood to let a famous victory slip from their grasp and regained the upper hand with a couple of well struck frees from David McGivney in the 54th and 55th minutes.

McGivney then kicked another free very narrowly wide but made no mistake when converting his fourth free in the 59th minute to leave his side in a comfortable four points lead. There was no way back for Abbeylara, who had very few chances in the second half in shooting just two wides.

Their main man Robbie Smyth did manage to land another point from a free in the first minute of stoppage time but Maurice O’Connor’s side were unable to engineer a last gasp equalising goal as the resolute Mullinalaghta defence stood firm to close out the game.