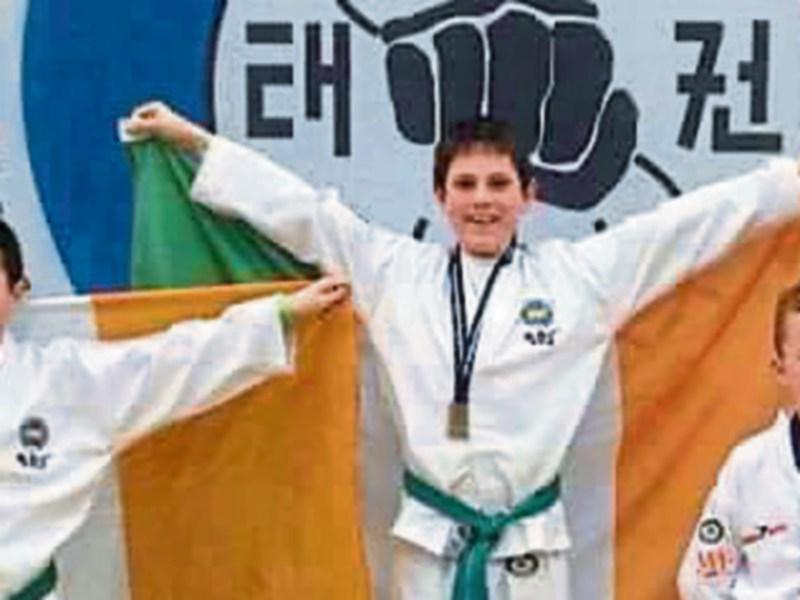 It's October 2016, twelve months since local lad Darragh Grehan from Edgeworthstown and his team mates started training for the 6th ITF World Cup in Budapest , Hungary. Darragh joined the local Inspiration Taekwondo when he was 9 years old after having a stressful number of months in school. He has now turned that negative experience into a positive and is training 6 days a week from Coole to Collinstown, Delvin to Drumbarragh and Athboy to Carlandstown. After every competition our instructors Mr Rodney Connolly & Mr Bryan Mahon step it up a gear.

For this month its time for the greatest competition yet. On the morning of 11th October, Darragh will weigh in. His 12- 14yr category is under 45kg. Training over the last 2-3 weeks have involved keep a food record, drinking oceans of water , 2 to 3 litres daily and training with a black bag next to his skin. The pressure is to keep within this weight category as if he goes over it, his opponents become bigger and they hit harder. From 12th - 16th the competition will involve patterns (a combination of blocks & punches, a routine with a theme, each theme becomes more complex as the colour of the belt progresses) ie white, yellow, green, blue, red and black. Darragh is currently a blue belt. Sparring in competition involves semi-contact fighting, wearing helmet, gum shield, gloves & foot pads. Points are gained by punching & kicking on body and head. Special techniques: jumping to touch an overhead pad with one foot, the pad gets higher until the winner is the only one who can achieve that height. There are 238 males competing in Darragh's group.

Darragh's mum Anne explained that over the last few months we have been doing a lot of fundraising to help us get there. Edgeworthstown and its many local business people have been very generous in supporting us. A huge thank you to everyone including Mel & Rose Conefrey who donated and raffled a hamper in their pub, Supervalu for letting us bag pack. Majella McCauley who ran a table quiz in Gorman's pub and the Edgeworthstown District Development who donated generously to our club. Frank & Mary Greene property sales, Carmel Ward hairdresser, Patrick Gogan Funeral Director, Marie in Jack's Corner House, John Farrell in J & M Giftstores, Gerry in Sportsman's Inn, Philip Quinn stores, Teresa's Haircare, Kanes Garage, The Edgeworthstown Fire Service, Girasole Takeaway, Bia Deas Cafe, Laura Doyle Fitness, Parker Furniture, Tullys Pharmacy, Quinns supply stores and the manager in Smyth's Toystore Athlone. A huge thank you for making this possible.

So on 10th October 12 members of Inspiration Taekwon-do and their families will fly to Budapest Hungary to represent our club , county and country .This week our club is 5 years old so Happy Birthday Mr Connolly.

Best wishes to Darragh and his team mates and all the Irish competitors taking part in the World Cup. Enjoy the experience Darragh, we are 100% behind you.