Abbeylara and Mullinalaghta clash for title in fascinating county final 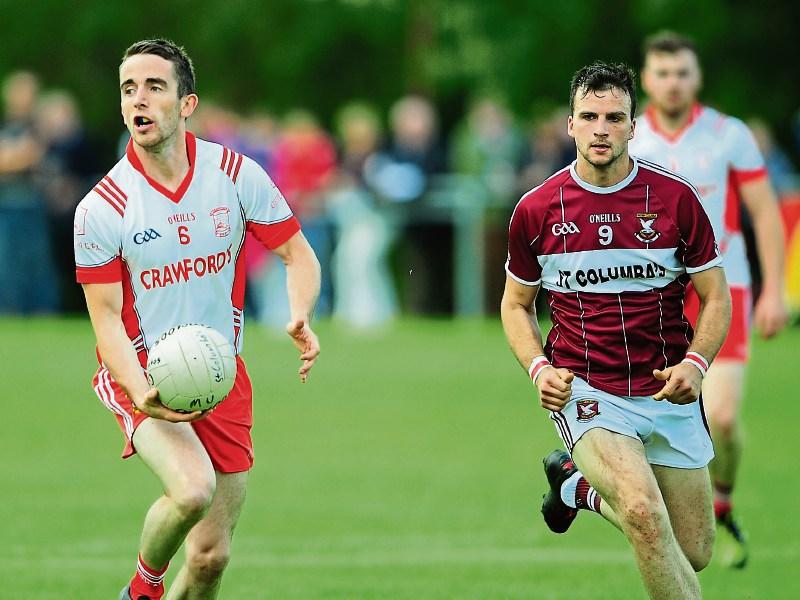 In a novel pairing that is attracting major interest all over the county and surrounding areas (and which should be reflected in the expected large attendance) a first ever clash between the north Longford clubs in the senior football championship title decider has eventually materialised as the beaten finalists in 2014 (Mullinalaghta) and 2015 (Abbeylara) battle it out.

Thus one of these progressive teams will make amends for the bitter disappointment of falling at the final hurdle and adding extra spice to this most intriguing local derby is the Northern Gaels factor, the underage amalgamation of Abbeylara and Mullinalaghta.

Players who enjoyed such great success with Northern Gaels in the recent past will be in action in the eagerly awaited senior final on Sunday and after winning five minor ‘A’ championship titles (2008, 2011, 2013, 2014 & 2015) the cream has gradually come to the top.

So it is no great surprise that Abbeylara and Mullinalaghta have made it through to the biggest occasion in Longford GAA and lads who once played together on the same underage team will be in direct opposition to determine who will be crowned the new county champions.

It is 66 years since Mullinalaghta last captured the senior championship title, all the way back to 1950 when they beat Ballymahon 2-2 to 0-4, and St Columba’s have never won the Connolly Cup as the coveted trophy was first presented in 1960 when Killoe had the proud distinction of becoming the first winners.

Abbeylara last emerged victorious in 2006 when their current manager Maurice O’Connor featured in the 1-9 to 0-10 win over Longford Slashers in the county final and he gets another crack at completing a magnificent double achievement which evaded him last year when they lost out to Killoe.

It was Emmet Og who also shattered Mullinalaghta’s title hopes in the 2014 decider, and again at the quarter-final stage last season, but sweet revenge was gained in the semi-final of the current campaign when St Columba’s scored a well deserved 2-12 to 1-10 win over the reigning champions who were chasing a three-in-a-row.

On the basis of that impressive performance the general opinion is that Mullinalaghta will have the edge in the 2016 title decider and particularly so as Abbeylara struggled to get over the line against Dromard in the other last four showdown and were also involved in a fierce battle to get the better of Clonguish in the quarter-final.

However, those two tough games might well stand to Abbeylara in their bid to win the senior championship for the third time and their meetings with Mullinalaghta take on a life of their own with a high intensity and a lot of aggression so the county final could go either way with a close encounter probably in prospect.

And that scenario is reflected in the recent championship clashes between the clubs with no less than four games ending in draws, starting with the stalemate in the group stage back in 2013 and the sides also ended up deadlocked in the quarter-final that same season with Abbeylara winning the replay by a solitary point.

Mullinalaghta gained revenge when they scored a convincing 2-8 to 0-9 win in the first round clash in 2014 and there was nothing at stake when the teams finished all square in the final group fixture in 2015 as both had already qualified for the quarter-finals.

Ironically, they were drawn to play each other yet again in the opening round of this year’s championship with both pitted in the Group 2 minefield that also included Colmcille and Dromard.

A stoppage time point from a free converted by David McGivney earned St Columba’s a draw against Abbeylara on that occasion and it could well be the same outcome in the big match on Sunday with little separating the sides as the recent results suggest.

Both are unbeaten on their path to the county final but something has to give in the quest to lift the Connolly Cup, a great honour that will be bestowed upon one of the respective captains - Shane Mulligan (Mullinalaghta) or Fergal Battrim (Abbeylara).

Cavan man Mickey Graham has done a fine job in guiding St  Columba’s through to the senior championship final and while this is his first season as the manager of Mullinalaghta, the former county footballer has been at this stage before when he was in charge of the Clonguish squad that lost to Longford Slashers by a single point in the 2011 title decider.

So from a personal point of view Graham will not hear of defeat on Sunday and he will be hoping that the Mullinalaghta team will play to their true potential as was the case in the dethroning of Killoe.

Backboned by a strong half-back-line in Shane Mulligan, Donal McElligott and Conan Brady and a powerful midfield pairing in John Keegan and Ruairi McElligott (despite his recurring injury problems), the St Columba’s attack have the scoring power to amass a winning tally.

James McGivney is enjoying a wonderful season for both club and county and will take some stopping while David McGivney, Gary Rogers, Jayson Matthews, Rian Brady and Aidan McElligott are also well capable of posing a serious threat.

Abbeylara, on the other hand, depend heavily on the lethal Robbie Smyth for the bulk of their scores and he was exceptional in the hard earned wins over Clonguish and Dromard in clocking up six points in both the quarter-final and semi-final encounters.

Having said that, there is probably a better balance to the Abbeylara squad and their stronger list of substitutes could prove to be a vital factor in the eventual outcome if they need to be utilised with former Longford star Padraig Berry waiting in the wings.

Apart from the dangerman Robbie Smyth, there is a need for Abbeylara to spread the scoring responsibility if they are to come out on top and Jason Kelly, Nigel Rabbitte and William Crawford have the ability to make their presence felt.

The best has yet to come this season from Conor Berry at midfield, who was excellent in winning the man of the match award in last year’s final defeat against Killoe, and Abbeylara  will be hoping that the 2015 county minor star can reach a similar high in the showdown against Mullinalaghta.

The Abbeylara defence are an effective tightly knit until, who will give nothing easy away, and the six backs will make it extremely difficult for the St Columba’s attack with Colm P Smyth, Fergal Battrim and Michael McHugh the key figures along with a most competent goalkeeper in Damien O’Connor.

The indications are that the county final might develop into a real war of attrition with the players so highly charged, such is the fierce recent rivalry between the clubs, but Mullinalaghta look to be sharper in attack and the current crop of players are fancied to end a very long wait for a third senior football championship success.

For more interviews and information ahead of Sunday’s match, see the 16-page County Final supplement free with this week’s Longford Leader.