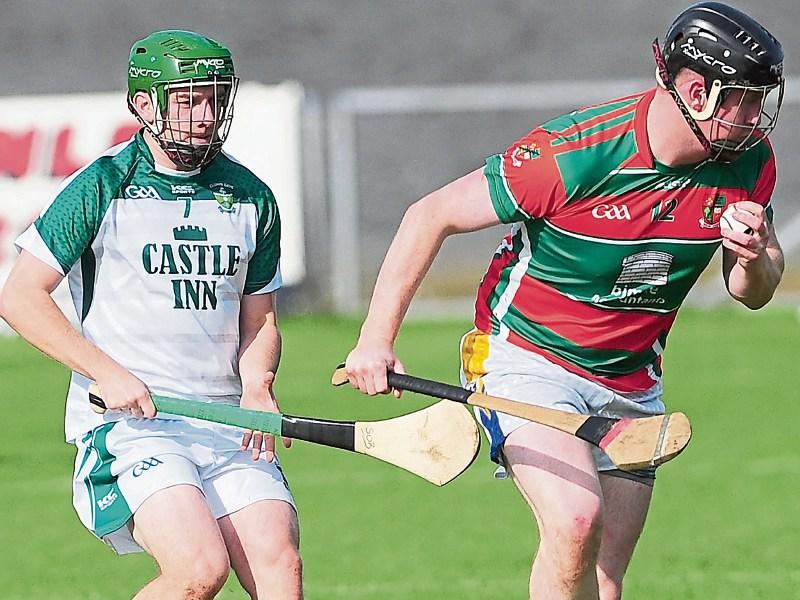 Wolfe Tones completed another Senior Hurling Championship four-in-a-row as they won the county title for the 17th time following a most emphatic victory over Clonguish Gaels at Glennon Brothers Pearse Park on Sunday last.

It was all too easy for the Mostrim club as they achieved a four-in-a-row for the third time since they won their first title back in 1992. They actually went on to win five-in-a-row after that and it’s hard to see them being stopped on the way to another five-in-a-row.

All over the pitch they had quality and with a terrific underage set-up they have had talent coming through. They could also depend on the more experienced players like Thomas and Benny Stakem, Paddy Cullen and Sean Browne. On Sunday Browne won his 17th senior championship medal with the club. Himself, Sean McNally and manager Mattie McLoughlin have been there since the very start of this incredible journey for Wolfe Tones.

Browne scored his side’s first goal in this 13 point win against a Clonguish Gaels side that played well below par and were also dealt a massive blow in the 27th minute when chief marksman Joe O’Brien had to go off injured. O’Brien had been a major doubt coming into the game and was heavily bandaged. As the game went on he struggled and eventually had to retire. His presence was missed greatly by Clonguish who found it hard to get scores.

Clonguish got a rather fortunate goal in the 48th minute through Jamie Rosney but that didn’t start a fightback. They only added on a further two points to their tally  while Wolfe Tones were able to tag on five more points.

Just seconds after the throw-in Wolfe Tones got the opening score with John Mulhern landing a point. Paddy Cullen then followed up with a nice point. Martin Coyle was unlucky not to get a goal in the sixth minute; Mulhern’s free was pushed away by Clonguish keeper Kevin Carberry and Coyle pounced but his effort went wide.

One minute later and Wolfe Tones raised the green flag when Sean Browne found the back of the net and it meant the whole inside forward line had got on the  scoresheet. In the 12th minute Wolfe Tones got a second goal, this time Cullen finishing the ball to the net.

Trailing by eight points, Clonguish Gaels got their opening score in the 14th minute when Joe O’Brien pointed a free. They couldn’t add to that and instead it was John Newman that pointed to restore his side’s eight point advantage in the 17th minute.

Kevin Carberry made a fine save just after to deny Paddy Cullen a second goal as Wolfe Tones went in search of more scores. Down the other end when Clonguish had chances they wasted them in hitting a number of wides.

In the 27th minute man of the match Seamus Hannon twisted and turned before slotting over his first point of the game to put Wolfe Tones ahead by nine points. Things got worse for Clonguish as Joe O’Brien had to limp off injured with Paul Barden replacing him.

Right before half-time midfielder Daire Duggan hit over a point to put Wolfe Tones ahead by ten, 2-5 to 0-1.

After going 23 minutes without a score and having just one solitary point on the board Clonguish got a second point in the 37th minute when Brian Gordon fired over an excellent effort.

Substitute Stephen Gregg added another score one minute later but there wasn’t going to be any revival for Clonguish.

Sean Browne added a point for Wolfe Tones in the 41st minute to the goal he had scored in the first half. Then John Mulhern and Paddy Cullen added quick fire points to put 11 between the sides. The lead was 13 in the 47th minute when John Newman and Martin Coyle (free) hit over points.

Clonguish really had no answer to Wolfe Tones and when chances fell their way they squandered them but they did pull a goal back in the 48th minute when Jamie Rosney’s speculative shot caught out Wolfe Tones keeper Andy Kelly as the ball dropped over the line.

That goal wasn’t to spur Clonguish into making a fightback in the final 10 minutes though. Mulhern fired over a free before Raymond O’Brien scored a nice point for Clonguish. Paul Barden then followed with a fine point but that was to be Clonguish’s final score of the game as Wolfe Tones ended the game strongly.

Seamus Hannon got his second point in the 53rd minute and then Martin Coyle added another. Mulhern, who was a threat throughout the game, got his third point five minutes from time.

The final score of the game was a point from Wolfe Tone substitute Keelan Cox in the 59th minute and it capped a fine win for the Mostrim side.