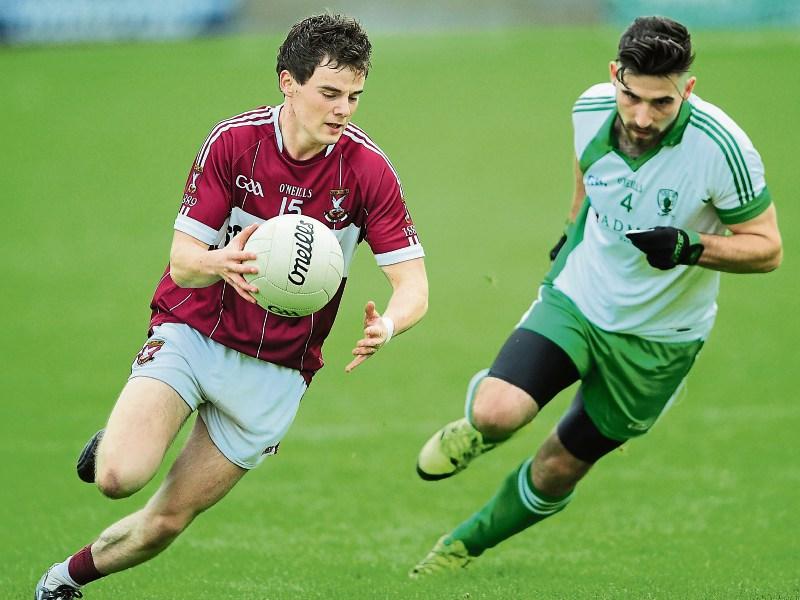 It was third time lucky for Mullinalaghta St Columba’s as they finally overcame Killoe Emmet Og to advance to the County Final for the second time in three years after a fantastic game of football played between two committed and excellent sides on Saturday evening in Glennon Brothers Pearse Park.

Over the past three years these sides have met at the knock-out stages of the championship. In 2014 Killoe  beat St Columba’s in the County Final while last year Killoe triumphed in the quarter-finals.

This year Mullinalaghta gained revenge and they did it by producing a commanding performance in dethroning the county champions of the past two years.

Under the guidance of former Cavan star Mickey Graham, Mullinalaghta were full value for their win over a Killoe side that finished the game with 13 men after Sean McCormack received a straight red for an off the ball incident in the 59th minute.

Substitute Simon Kiernan, only on the field five minutes, was shown a second yellow in  stoppage time. It was a disappointing end for Declan Rowley’s Killoe side as they relinquished their two-year grip on the Sean Connolly Cup.

Right at the end the excellent Rian Brady got his side’s second goal amid scenes of wild celebrations from supporters of the North Longford club.

Mullinalaghta have made great strides over the past number of years and will feel quietly confident going into final where they’ll play either neighbours Abbeylara or Dromard.

For Killoe, who were without the injured Michael Quinn, they’ve been the club that others strived to be over the last number of years and they have represented the county with distinction in the provincial club championship. No doubt they will be back again.

Killoe had early opportunities but they kicked two wides. Mullinalaghta opened the scoring with a fine point from Rian Brady after some great fielding by David McGivney.

McGivney and his older brother James,  and Jayson Matthews all hit over scores as Mullinalaghta were on fire and stormed into an early six point lead, 0-6 to nil.

Killoe finally got their first score in the 11th minute through Paddy Kiernan and four more points saw them reduce the gap to just one point in the 18th minute.

Mullinalaghta though didn’t panic and replied by hitting over three points in a row but Killoe came back at them again with Denis McGoldrick (two, one free) and Mark Hughes hitting over points to leave the minimum separating the teams at the break; 0-9 to 0-8.

John Keegan and McGoldrick exchanged early points before Donie McElligott got on the scoresheet in the 40th minute.

Six minutes later and Killoe went ahead for the first time in the game; Daniel Mimnagh did very well to win possession in his own half, and in a sweeping move up the field the ball ended up again with Mimnagh and he rattled the back of the net with a superb strike.

With so much at stake the final 10 minutes were about who wanted this game most and it was Mullinalaghta.

In the 55th minute they were awarded a penalty when Brady was taken down in the area. Donie McElligott confidently dispatched the spot-kick beyond Shane Fitzpatrick to put his side ahead by three, 1-12 to 1-9.

Minutes later Killoe were reduced to 14 men when Sean McCormack was sent off for an off the ball incident. Mark Hughes cut the gap to two points minutes later before Simon Kiernan received a second yellow.

With time running out for Killoe there appeared to be no way back and Brady sealed a fine win for Mullinalaghta when he scored a goal right at the end; cue the celebrations.

Mullinalaghta were last county champions in 1950 and now they are just sixty plus minutes away from ending that 66 year famine.