Joe O'Brien points the way for Clonguish in win over Granard 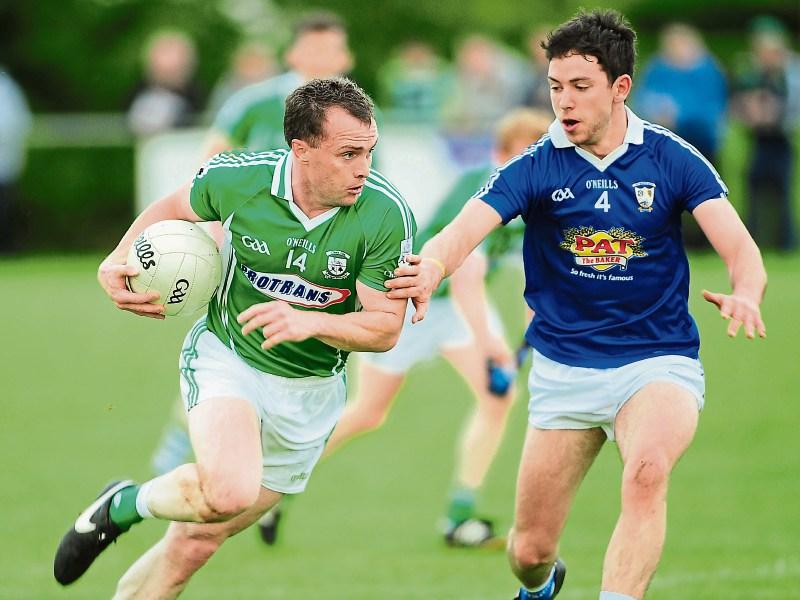 While Clonguish followed up their fine win over the title holders Killoe Emmet Og in the opening round in getting the better of Granard, it proved to be a most difficult task with the narrow margin of just two points separating the sides in a very entertaining Group 1 game at Maguire Park, Ballinalee on Friday night last.

Powered by the outstanding Darren Gallagher at centrefield, St Mary’s produced a much improved performance in the aftermath of their disappointing defeat against Longford Slashers the previous week and deserved at least a draw on this occasion

Four points behind in the early stages of the second half, Granard came storming back to fire over five scores  in a row - a brilliant brace from Darren Gallagher with Conor Mallon (two frees) and Liam O’Rourke (a terrific strike from near the sideline) also on target  to lead by 1-12 to 1-11  with a surprise win possible.

But St Mary’s were left to rue some costly missed chances as Clonguish got back into contention after going 17 minutes without a score. Paul Barden landed a sweetly struck equaliser in the 52nd minute and then Joe O’Brien kicked a couple of great points from play - the second of which from a very tight angle in the 58th minute was top notch and worthy of winning any game.

The deadly accurate O’Brien converted a free in stoppage time to bring his total to 0-8 and after clocking up 0-9 against Killoe the previous week, his impressive scoring rate is playing a leading role in the latest Clonguish challenge for championship honours with a place in the quarter-finals guaranteed.

Granard, on the other hand, must now beat the county champions Killoe to keep alive their hopes of reaching the last eight and  Niall Sheridan’s side will believe that they are capable of getting the result they need.

While Clonguish stretched ahead by 0-5 to 0-2 in the early stages of the Round 2 game with their scores coming from Joe O’Brien (three frees), centre-half-back Stephen McLoughlin (a cracking effort) and Colin Farrell, St Mary’s then enjoyed a great spell to hit the front thanks to a well struck goal from Kevin McGauran in the 13th minute (set up by Darren Gallagher) and a point apiece from Conor Mallon, Liam O’Rourke and Mark Tully.

The lively O’Rourke had surged forward to shoot over the bar direct from the throw-in and Darren Gallaher was also on the mark as Granard served notice of their  intent to upset the odds.

But they survived no less than three very lucky escapes in the first quarter of the contest with Ciaran Williams (twice) and Paul Barden squandering clear-cut goal chances for Clonguish who eventually found the back of the net when Joe O’Brien cut in from the right to create the opportunity for Ciaran Williams to put his side ahead again in the 19th minute.

Prior to that crucial score, O’Brien converted another free and Clonguish ended up leading by 1-10 to 1-7 at the break with the other points coming from Williams (2), midfielder Peter Hanley and defender Ronan Sweeney.

Granard kept in touch with points from defender Vinny Nally (a very good score) and Conor Mallon (free) but in a decisive moment approaching half-time Niall O’Hara wasted a great chance of a goal when he let the ball slip from his grasp in front of the posts.

Clonguish matchwinner Joe O’Brien fired over a tremendous point (play) from a tight angle to extend the advantage with five minutes gone on the changeover but  spirited Granard then enjoyed a new lease of life in a very determined bid to avoid defeat.

Their cause was certainly not helped when free-taker Conor Mallon was dismissed after receiving a black card for a foul on Paul Barden in the 46th minute and the match, amid the fading light, eventually swung back in favour of Clonguish despite the significant setback of losing David Barden who was forced to retire injured in the 37th minute.