Legan man represents Ireland ‘Down Under’ 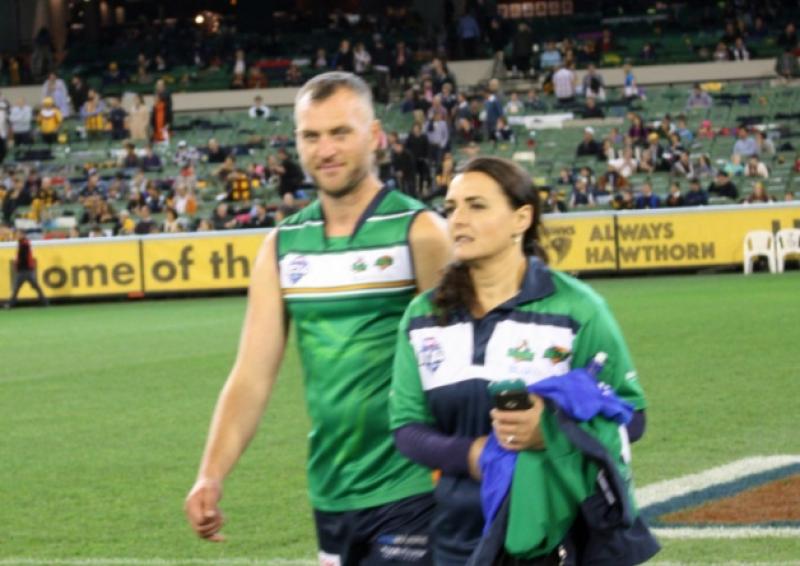 Legan native Peter Ross was one of only thirteen Irish-based players that linked up with a further seventeen Irish players living around Australia to play in the fifth AFL International Cup last August.

Legan native Peter Ross was one of only thirteen Irish-based players that linked up with a further seventeen Irish players living around Australia to play in the fifth AFL International Cup last August.

The tournament, which featured eighteen nations competing in both male and female competitions, takes place every three years and it is the highlight of the international Aussie Rules calendar.

Ireland were champions in 2002 and 2011 (Peter was part of the all-conquering 2011 squad), but unfortunately they failed to retain their title as they fell to defeat at the hands of Papua New Guinea in the final played at the world famous Melbourne Cricket Ground.

Here Peter, who plays his club football with South Dublin Swans, recounts his experience ‘Down Under’:

“On arriving in Melbourne the first job was to try and get over the jet lag and come to terms with the temperature change having gone from summer to winter overnight. Some people think Australia is always warm but August in Oz is the equivalent of February in Ireland and Melbourne is at the very south of the continent meaning the winter is normally fairly cool, especially once the sun goes down.

The next job was to get familiar with our Australian based team mates. I had met some of these guys before including captain Mick Finn.

“Mick is a Kerry man, now more than ten years in Australia. Standing at 6’8 he is a magnificent athlete and leader who was breaking into the Kerry senior team when he emigrated. As a youngster he was on the bench for Kerry in their 2002 All-Ireland Final loss to Armagh, he was also an Irish International in basketball. Since arriving in Australia and starting playing Aussie Rules he has been twice voted best player at the AFL International Cup and also twice voted best player in his Melbourne AFL league, the Northern Football League.

“Our player coach David Stynes also had a strong Aussie Rules pedigree, being the youngest brother of the late Jim, the only Irish player to win the Brownlow medal for the best player in the AFL.

“After four days in Australia we had our first game against Fiji. My impression of South Sea Islanders from watching rugby is they are huge units that love to hit you hard. From this game they didn’t just like to hit us hard but illegally as well. We had three guys off with concussion before the end of the game and I hobbled off after only a few minutes when a Fijian landed on my ankle, not the start I had been dreaming about.

“Collectively we were quite scrappy in our play but as the game wore on we improved and in the end we won by about 50 points. One of my team mates commented it was the toughest game he had ever played and it was an indication of what to expect for the rest of the tournament.

“Next up was France three days later. My ankle had swollen up badly after the Fiji game and even though every spare minute was spent rehabbing it, running was still uncomfortable so I watched this one from the sideline. This match was easier than the Fiji game and we overcame them by about 100 points.

“Our final group game was against Nauru, a tiny Pacific nation, for whom Aussie Rules is their national sport. Although we had an overwhelming size advantage with our average height 6 foot two inches they were fast and agile and were natural footy players. They had beaten a fancied Great Britain in the previous game and it was a winner-take-all clash, whoever prevailed would go straight into the semi-final. The loser would be contesting minor placings between 5th and 10th.

“Thanks to my chiropractor wife (Tammy) I’d managed to get back for this game, knowing if I missed any more games I’d never get back into the team.

“This game was played in Bendigo, a country Victoria town about a two-hour journey from Melbourne where there was a gold mining boom in the mid 1800s. It was fixed for this town as a local man Ian Bracken from nearby Castlemaine had started one of the first Aussie Rules clubs in Ireland back in the early 2000s. The game itself was tight until the final quarter when we pulled away to win by 27. We got a very hospitable reception from the locals after the game. Many were surprised international players were so good at their indigenous sport.

“The semi-final the following Tuesday was against South Africa, who had beaten Papua New Guinea in a massive shock in the group stages. Unusually some of the South African team have played Gaelic Football and were part of a tour of Ireland earlier this year. I missed out on playing as the Fiji game injury had really limited my opportunity to show my worth to the Australian based coaching team. After a very close first three quarters we pulled away in the final quarter to win by 25 points and advance to the final for the second consecutive tournament.

“Papua New Guinea who Ireland defeated in the final at the last tournament in 2011, would be our opponents. A team with very talented footy players, some of whom had previously been on scholarships with professional AFL teams. The game was played as the undercard to a crunch end-of-season clash between the eventual Premiership winners Hawthorn and their huge rival Geelong, so an eventual crowd of around 80,000 attended.

“Unfortunately for me the ankle injury scuppered my chance of playing as even though I was fit again I couldn’t break into the team having missed so much game time. This was personally very disappointing having prepared for this tournament for three years with huge time, effort and expense spent. However the final was still going to be a great occasion as very few teams get a chance to play at the MCG now days outside of the professional AFL league.

“Papua New Guinea was ruled by Australia up to 1975 and they still have strong sporting links with their elite underage aussie rules team playing in Australian competitions. Sport has been described as a replacement for tribal warfare in Papua New Guinea and in a land where head-hunting and ritual cannibalism survived, in certain isolated areas, into the 1970s the distance between sport and open warfare is not that far removed. Thankfully the PNG players focused on playing football rather than all out combat but their pre-match war dance was a reminder of their heritage.

“The final was a close affair throughout with Ireland leading from the start. Player of the tournament Mick Finn kicked all three first quarter goals for Ireland. However as the game progressed PNG slowly got back into it. In the final quarter PNG got ahead for the first time and even though we replied we ran out of time in the end and we lost by a heart breaking three points.

“Even though we didn’t win the Irish Warriors have now contested three International Cup finals and won two of them. It’s a great record when you consider none of the Irish players have grown up playing Aussie Rules.

“It was a disappointing day all round for Ireland as the women’s team also lost their final to Canada earlier that afternoon. Overall even though we didn’t win it was a great experience, meeting people from so many different countries who all have a love for Aussie Rules.”