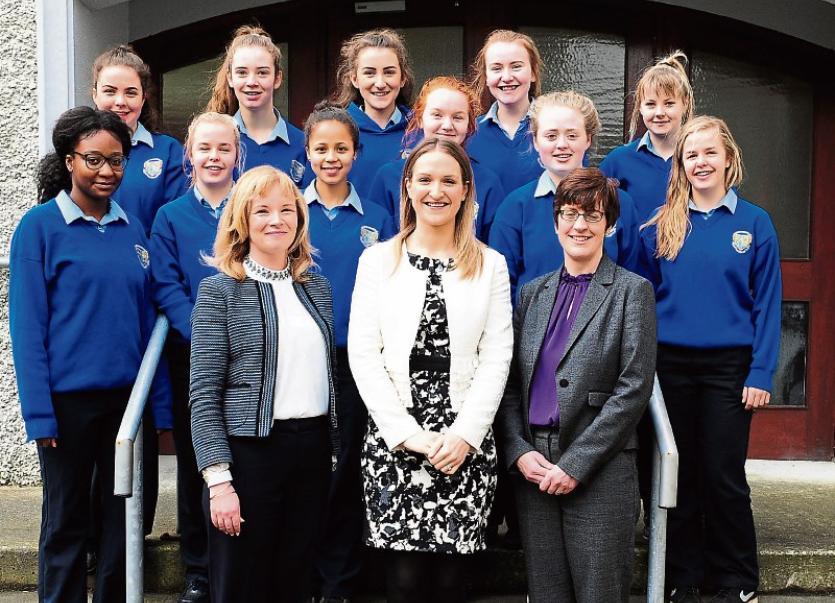 If you fall out of bed in the morning and break your arm, you won’t go about your day as normal and ignore the pain. So why, asks Minister Helen McEntee, do we try to ignore the pain of stress, anxiety or other mental health issues?

Minister of State for Mental Health and Older People, Helen McEntee, paid a visit to Mean Scoil Mhuire on Friday March 10 last, as part of the school’s Positive Mental Health Week, where she spoke about everything from physical health to emotional wellbeing.

“They’ve had a fantastic week, full of activities and I’m delighted to be here to help them finish it off,” the Minister told the Longford Leader following her address to the students of Scoil Mhuire.

“I think for a long time, we didn’t talk about mental health with our young people or anybody and I think things have started to change and really young people have actually driven that change.

“While I’ve spent a lot of time throughout the last number of months being in different schools and engaging with young people, probably the most important thing that I’ve learned is that young people are resilient and they have a voice. They want to be heard. They want to be listened to.”

But, she added, things can be tough for young people - especially in school when life is changing and it’s hard to articulate what it is that you need. And that’s why communication is so important.

Minister McEntee has had a strong link to politics since 2010, when she took up the position of assistant to her father, Shane McEntee who was a Fine Gael TD from 2005 until his death in 2012.

“Unfortunately, we hit a bump in the road, and my father died by suicide,” the Minister  told the girls who gathered in the assembly hall to hear her speak.

Her father died in December 2012, which triggered a by-election, resulting in Minister McEntee  succeeding him as TD for Meath East. In 2016, she was appointed a Junior Minister of State in the Department of Health.

“She was very open about [her father’s suicide] and that resonated with the students,” said Chairperson of the Positive Health Committee at Scoil Mhuire, Chrissie Hardiman.

“She also talked about her role as a woman in Dáil Éireann - a young woman - and again, in an all-female school, that resonated with the kids. And the fact that this  is the first government to have a Minister for Mental Health shows how important this issue has become and how the conversation is opening up.”

In her role as Minister, Helen McEntee aims to ensure that access to the proper mental health services is available to all.

“It’s identifying where the gaps are in the counties, where the staffing gaps are, what kind of money we need to fill those gaps and I’d hope to, in a couple of weeks, announce a plan which will set us in the right direction.”

Minister McEntee concluded by congratulating the staff and students for organising “such a fantastic week”, which finished on Friday afternoon with a talent show.

“I think when you learn something from such a young age, you tend to bring it with you throughout your life. So when we’re taught from a young age to look after our physical health, we remember that as we get older.

“And if we can instill that in our young people - to look after their emotional wellbeing and mental health - then I think that’s something that they will take with them for the rest of their lives.

“For me as Minister for Mental Health, the priority is to shift the change.

“So while we need to continue to develop  and improve our services and make sure that they are available to people when they need them, we need to start focusing on prevention and actually trying to ensure that young people don’t actually need to access those supports, but that they have the knowledge and the expertise to do so when maybe they haven’t before now.”

For the full video interview with the Minister, see www.longfordleader.ie.