Longford Town back in league action against Cobh Ramblers at Bishopsgate 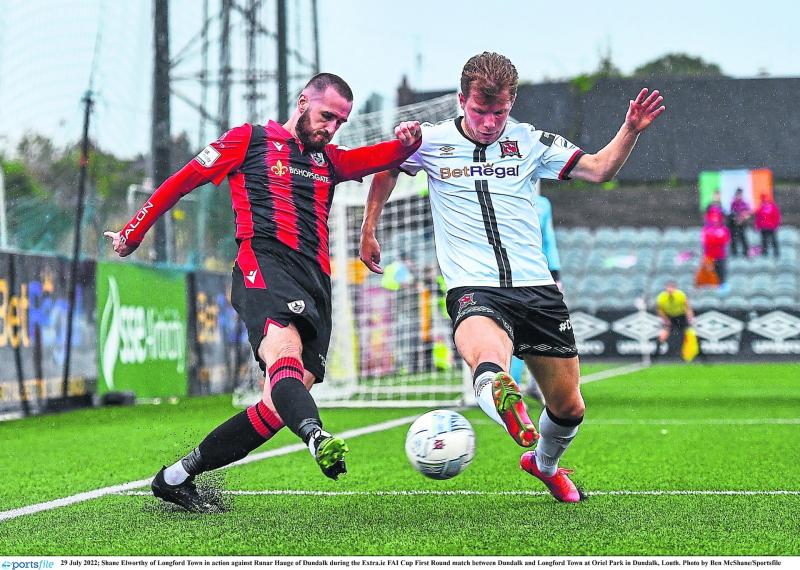 Longford Town are back in league action against Cobh Ramblers at Bishopsgate this Saturday night (kick-off 7.30pm) after the first round of the 2022 FAI Cup against Dundalk at Oriel Park last weekend.

Despite the 4-0 defeat against  Dundalk, the Town should still be in confident mood for the visit of a Cobh side that gave Cork City a very tough game in the FAI Cup clash at St Colman's Park last weekend before losing the game on a 1-0 scoreline in front of a huge crowd.

The fact that the First Division leaders only got through with a Ruairi Keating goal in the 27th minute shows that Cobh have improved so much since the arrival of Shane Keegan who is a very good manager who has lots of experience in the First Division.

Cobh did very well against their highly rated neighbours but their great performance didn't get the result it deserved.

The Town travelled to Oriel Park on Friday looking to spring a surprise against one of the strongest squads in the Premier Division.

Winger Runar Hauge, who joined the club on loan from Hibs in Scotland got the nod to start from manager O'Donnell and regular keeper Nathan Sheppard replaced Peter Cherrie in the starting line-up.

Despite being under pressure for long periods the Town held out to almost the hour mark and then Dundalk  scored four goals in a ten minute period to clinch their expected victory.

Gary Cronin used five subs in the last half hour with Adam Verdon, who has joined the club from UCD, replacing his brother Sam in the 61st minute.

Another new signing Darren Clarke who recently joined the club from Crumlin United in the Leinster Senior League replaced Adeyemo, also on 61 mins.

Cristian Magerusan, recovering from injury, could come back in contention for Saturday's very important game against Cobh and there could be another new face in the squad also.

Midfielder Mark Hanratty has joined the club on loan from Dundalk and a lot is expected from the 20 year old.

Callum Warfield, who has come through from our under 19s and has been a regular in Town first team squads in the recent past, has joined Leinster Senior League side Maynooth University Town.

After our exit from the Cup the Longford squad need to start picking up points to make sure that they remain in the top five  and a place in the play-offs.

There is no doubt that the run in will be very tough with six clubs still fighting it out for the four play-off spots.

At this stage Cobh seem to be out of the running  but Shane Keegan will have them well organised and very hard to beat as they always were but his knowledge will make a huge difference to his team going forward.

The two previous meetings between the clubs were close encounters. The first meeting at Bishopsgate ended 2-0 in favour of the Town with goals from Darren Craven in the 24th minute and the second from Eric Molloy in the 84th minute.

The second game in Cobh ended 4-2 to the Town who had to come from behind early on as Pierce Phillips gave the home side the lead in the 8th minute before Dylan Barnett equalised in the 17th minute.

It was 1-1 at half-time but Cristian Magerusan gave the Town the lead in the 49th minute. Aaron Robinson, who is having a great season in midfield, scored goal number three on the hour mark but the home side hit back immediately with a goal from Jake Hegarty.

Five minutes later Shane Elworthy put the game out of reach for Cobh when he scored number four for the Town.

There is no doubt that the Shane Keegan influence in Cobh will make a big difference and it will take a big effort from the Town to get all three points.