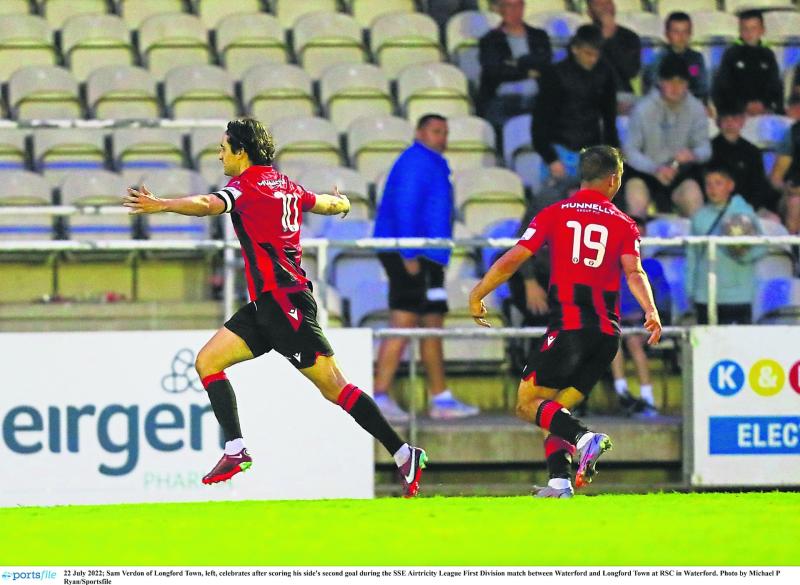 What a wonderful win for Longford Town over ten-man Waterford FC in a dramatic finish to the SSE Airtricity League First Division clash at the RSC on Friday night last.

A Sam Verdon header yielded the winning goal approaching the sixth minute of additional time as Gary Cronin’s side snatched all three points after substitute Jordan Adeyemo scored the equaliser in the 84th minute.

In the aftermath of the major disappointment of losing to bottom of the table Athlone at Bishopsgate the previous week, this was a massive result down south for the Town in boosting the bid to reach the promotion play-offs.

Waterford broke the deadlock in the 18th minute with a cracking goal from Shane Griffin after he connected with a right wing cross from Tunmise Sobowale.

Just before the break the home side suffered a significant setback when Wassim Aouachria was sent-off after getting involved in a tangle with Aaron Robinson in the 44th minute.

The second half was delayed following a floodlit failure and when the power was eventually restored, Waterford went very close to scoring a second goal from a Phoenix Patterson free-kick that struck the post in the 67th minute.

Longford got back on level terms in the 84th minute when midfielder Dean McMenamy fired in a shot that saw the ball deflect into the path of Jordan Adeyemo who found a way past the Waterford keeper Brian Murphy.

With the game looking set to end in a draw, up popped Sam Verdon to score the matchwinning goal after he connected with a left wing cross from Dylan Barnett.

The Town showed a lot of character in bouncing back from the demoralising defeat against Athlone and this excellent victory over Waterford will give the players a big lift going into the FAI Cup first round game against Dundalk at Oriel Park this Friday night.