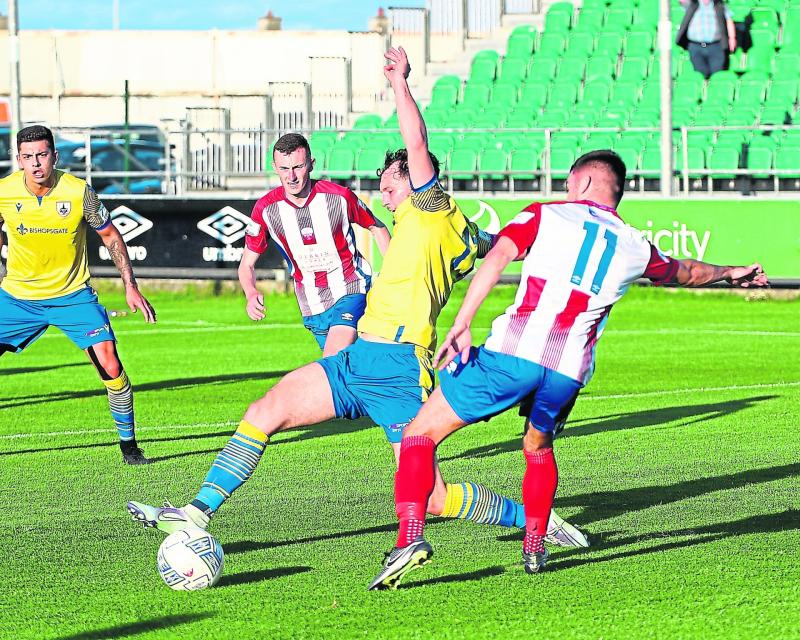 It all went wrong for Longford Town in the second half of the SSE Airtricity League First Division clash at the Markets Field on Friday night last as they crashed to a disappointing defeat against Treaty United.

Two penalties and a third goal from Enda Curran clinched the vital win for the Limerick side who have now closed the gap behind Gary Cronin’s side to just three points along with Wexford FC in the battle for places in the promotion play-offs.

The Town ended the game with 10 players on the pitch after second half substitute Sam Verdon, who was just four minutes into the action, was sent-off and thus he will be suspended for the next fixture against Athlone at Bishopsgate on Saturday July 16.

With Ryan Graydon transferred to Derry City, Longford introduced new signing Jordan Adeyemo and the former Galway United player was brought on in the 70th minute when the Town were trailing 2-0.

It might have been a different story had Karl Chambers not blasted the ball over the bar when in a great position to score in the 27th minute and a couple of other good chances were created in the first half through Aaron Robinson and Cristian Magerusan.

Scoreless at the break, the Town thought they had broken the deadlock when Joe Power finished the ball to the net in the 52nd minute but the goal was disallowed in a tight call as the linesman raised his flag for offside.

Treaty took the lead in the 56th minute when Marc Ludden converted a penalty, awarded for a foul on pacey winger Willie Armshaw who posed plenty of problems for the Longford defence throughout the game and he went close to scoring in the first half when he shot narrowly wide.

The home side were awarded a second penalty in the 66th minute when substitute Enda Curran was fouled by Sam Verdon for what was deemed a clear-cut scoring opportunity by the referee Ray Matthews and Curran made no mistake from the spot kick.

With Verdon dismissed for impeding Curran in the box, there was no way back for ten-man Longford and their tale of woe was complete when a cross from Ludden was finished to the net with a close range header from Curran.