Another own goal disaster as Longford Town lose out to Waterford 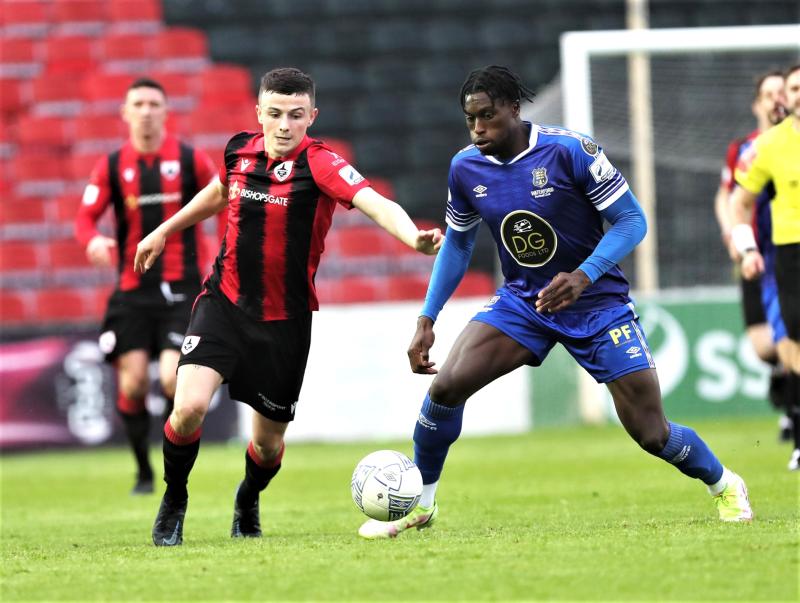 Whatever slim chance Longford Town had of getting back into contention for a shot at the title would now appear to be gone after crashing to a disappointing defeat against Waterford FC  in the SSE Airtricity League First Division clash at Bishopsgate on Saturday night.

Apart from the fact that the home side suffered the sickening blow of conceding an own goal in the early stages of the game, this developed into a general struggle against superior opposition who are a full-time professional club and it showed with their quick pace in attack posing a lot of problems.

A pass back from young central defender Matthew Dunne ended up in a badly timed mishit by the Town keeper Luke Dennison as the ball ended up over the line in the 13th minute and it was a real uphill battle for the remainder of the match as the midlanders were unable to find a way past the rock solid Waterford defence.

The Blues keeper Brian Murphy was never troubled with Longford failing to get a shot on target and the killer blow was struck when the extremely skilful Waterford winger Phoenix Patterson weaved his way through to fire home a cracking second Waterford goal in the 76th minute.

The tale of woe for the Town was complete just before the full-time whistle when Matthew Dunne, in his attempt to clear the danger, was penalised for fouling Cian Kavanagh in the box and the Waterford substitute made no mistake in converting the resulting penalty in the fourth minute of additional time.

Minus the services of captain Sam Verdon, the Longford manager Gary Cronin started Joe Power and Joe Doyle in the attack but the concession of a bizarre own goal for the second time this season at Bishopsgate proved to be a shattering setback.

The currently managerless Waterford are a strong team packed with quality players and were in control from the moment the deadlock was broken.

Apart from a shot from Aaron Robinson that went wide of the post in the 20th minute and a Doyle cross into the box that almost broke kindly for Power in the 41st minute, the rare chance of an equaliser never really looked like materialising.

Waterford were unfortunate not to score again in the 40th minute when a shot from the always dangerous Patterson clipped the crossbar and there were another couple of close calls in the same attack in the 57th minute.

The towering figure of the talented Roland Idowu broke through and looked certain to score, only to be denied by a fine point-blank save by Luke Dennison, and while the ball fell into the path of the Waterford striker Britton a terrific block by Matthew Dunne prevented another goal for the visitors.

There was a half-chance for Aaron Robinson in the 68th minute but the ball was knocked out for a corner in his bid to make contact with a through ball from Ben Lynch. Moments later the Town launched another attack but Joe Power shot into the sidenetting and that was as good as it got for the home side.

Patterson put the issue beyond all doubt when his excellent penetrating run yielded the second goal for Waterford with Kavanagh wrapping it up from the penalty spot deep into stoppage time.

Longford are back in action on Friday night when they make the long trip down to Cork to take on Cobh Ramblers at St Colman’s Park in the last fixture before the mid-season break, kick-off 7,45pm.