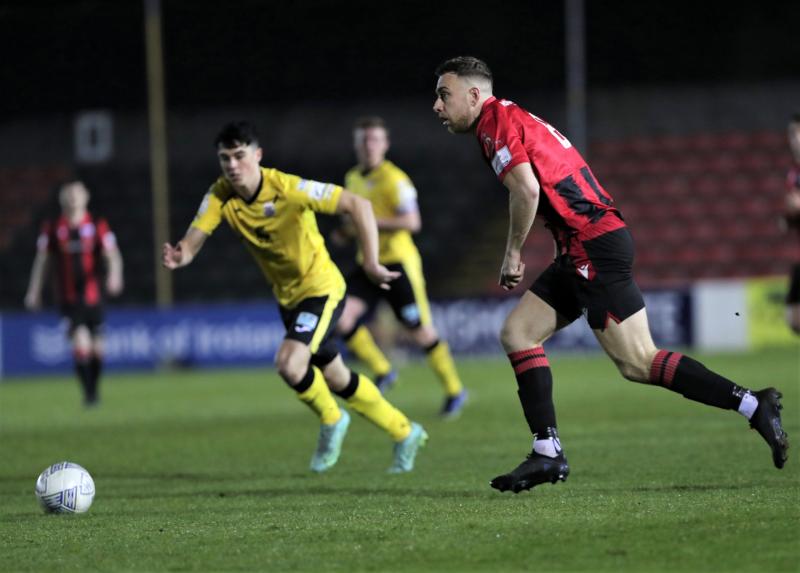 Longford Town picked up three vital points at home last Tuesday week (April 12) when they recorded their second two nil victory in three days at Bishopsgate, a win that pushed the team up to third position in the table with a game in hand.

Cobh came to Longford chasing a win as they are very close to Athlone at the bottom of the table and they showed that they are capable of playing good constructive attacking football and at one stage the Town were indebted to keeper Luke Dennison who made crucial saves at various stages of the game.

Michael Barker made an important tackle on six minutes to thwart a dangerous Cobh counter attack. After that early scare, Longford Town took control and they produced some wonderful link up play between Ben Lynch, Dean McMenamy and Ryan Graydon which ended in a Town corner on 14 minutes. Cobh went close a minute later but the Town defence did well.

Sam Verdon went close in the 18th minute but Cobh defended well and the Town captain was unlucky two minutes later when his shot hit the crossbar and flew over.

Longford Town took a deserved lead in the 24th minute when Verdon knocked down the ball to the inrushing Craven who gave Cobh keeper Barron no chance with an excellent strike from around 25 yards. That was Craven's second goal in successive games and he is doing very well in front of goal.

The Town should have increased their lead in the 34th minute when a Verdon shot was blocked and Craven following through put the ball inches wide.

A minute later Dennison was the Town's saviour when O'Brien Whitmarsh broke through but the ‘keeper produced a super save.

Longford Town were well on top at this stage and should have increased their lead leading up to half time but the visitors defence stood solid.

The Town's first chance of the second half fell to Verdon but he shot wide on 50 minutes.

Graydon was causing many problems for the overworked Cobh midfield and they had a few players booked. Graydon had to be replaced in the 65th minute and new signing Joe Doyle, who only joined the club early in the week, had to be drafted in due to an alarming amount of injuries at the moment.

Doyle, a striker, who previously played with Bray, showed nice touches. Karl Chambers replaced Aaron Robinson in the 70th minute and Cobh started to get into the game with ten minutes to go but the Town defence stood firm.

O'Brien Whitmarsh was causing problems up front for Cobh but they couldn't break the Town defence. The Town pushed forward and got the all important second goal in the 84th minute, an inswinging corner from Dylan Barnett was headed to the net by Eric Molloy past Barron on the Cobh line, a superb goal.

Cobh didn't throw in the towel and Luke Dennison had to make a super save in the 87th minute to keep his goal intact. Barron made a smart save from Verdon in injury time but goal scorer Molloy had to clear a dangerous situation as Cobh continued to press forward looking for a goal.

The Town lost the impressive Shane Elworthy through injury in the 85th minute and he was replaced by Matthew O'Brien.
This was a hard earned victory for the Town against a useful Cobh side who will undoubtedly take many points in the forthcoming games.

Manager Gary Cronin hopefully isn't facing an injury crisis with games coming thick and fast but hopefully he will have a near full strength squad for next Saturday night's home game against Treaty Utd who will be making their first visit to Bishopsgate.