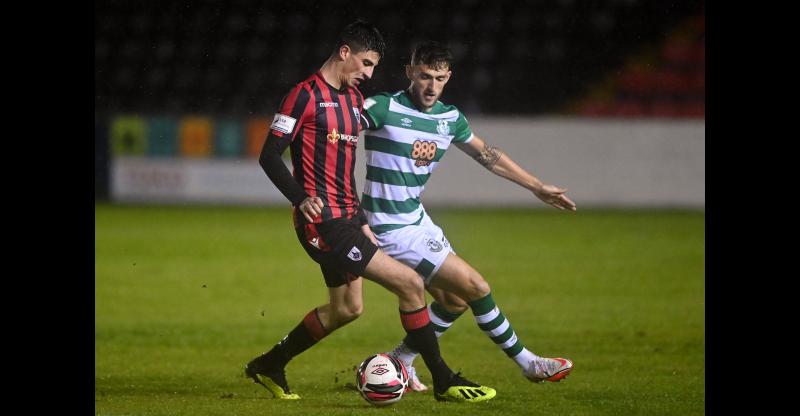 Shamrock Rovers remain firmly on course for back-to-back league titles after super sub Graham Burke struck for the decisive only goal that sunk gutsy Longford Town before an official attendance of 649 at Bishopsgate on Saturday evening.

Already relegated Longford had little to play for except pride and as has been the story of their frustrating season, they were somewhat unfortunate not to be ahead at half-time. 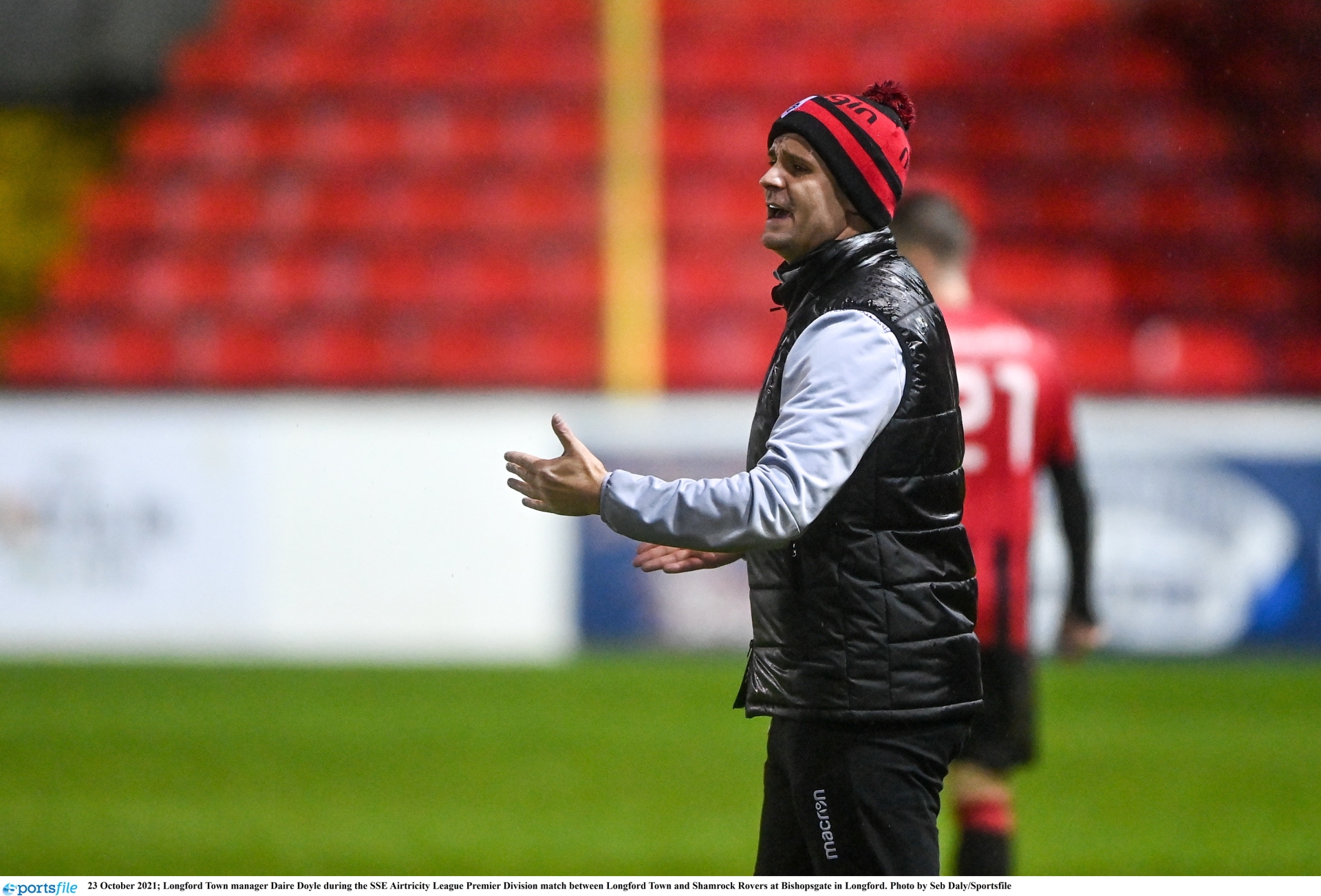 Shamrock Rovers boss Stephen Bradley made a triple substitution during the second half to ignite his side’s challenge and it was one of this trio, Burke, that delivered the goods on what was an absolutely miserable evening weatherwise.

This victory sees Shamrock Rovers go a massive 16 points clear at the summit of the SSE Airtricity League Premier Division. Indeed, they could become league champions without kicking a ball if St Patrick’s Athletic were to lose to Dundalk on Monday night.

This was Longford’s 21st defeat of the campaign, and it was the fourth occasion that they succumbed narrowly to The Hoops. They’ve five games left to complete their league programme.

In the miserable weather, with rain cascading down heavily, Daire Doyle’s Longford Town rolled their sleeves up and a gutsy first half performance saw decent goal scoring opportunities come the way of Rob Manley, Aodh Dervin and Aaron Robinson but none managed to beat inspired Rovers ‘keeper Alan Mannus and find the twine.

Town’s best sight of goal arrived in the 36th minute. Manley skipped his way into the box and was denied by the outstretched hand of Mannus and following up smartly, Dervin’s strike was also saved by the visiting custodian before Manley headed a cross from Aaron McNally over the crossbar.

The Hoops, striving to move three points closer to their 19th league title, struggled to break down Longford’s stubborn and disciplined rearguard during the opening 45 plus minutes.

Seven minutes earlier, Rovers also came close to breaking the deadlock. Joey O’Brien made positive inroads into the ‘Town box and found Rory Gaffney whose shot was blocked at the expense of a corner by Shane Elworthy. From the corner, Richie Towell had two attempts to find the target but each time he was thwarted and Longford cleared their lines.

The opening exchanges of the second half were quite scrappy and thankfully the wind and rain began to abate slightly allowing the players to express themselves.

With matters still tied at nil all, Rovers boss Stephen Bradley turned to his bench for some artillery to transform their fortunes and he made a 62nd minute  triple substitution.

Three minutes later, and almost inevitably, it was one of the three subs that broke the deadlock. Graham Burke showed good vision to release Gaffney and his cross was met by Danny Mandroiu who was denied by the excellent Lee Steacy. However, the Town number one was powerless to keep out Burke’s strike from the rebound.

Staring at a 21st league reversal in the face, Longford, to their credit, refused to fling in the white towel.

A 74th minute long range Aaron Robinson shot led to the first of three corners in succession for the home side and while Dylan Grimes’ deliveries posed questions, Rovers managed to lift the siege through O’Brien.

Minutes later, a teasing cross from Grimes saw Rob Manley rise highest at the back post and unfortunately his header cleared the crossbar. That was the closest already relegated Town came to snatching an equaliser.

In the 90th minute, Lee Steacy made the trek from his goal to bolster the Town attack from a corner but unfortunately it came to nought.

In the third minute of added time, Burke broke at pace for Rovers and Aodh Dervin showed his great engine to get back and execute a fine tackle and Rovers clung on for their fourth win of the campaign over De Town. 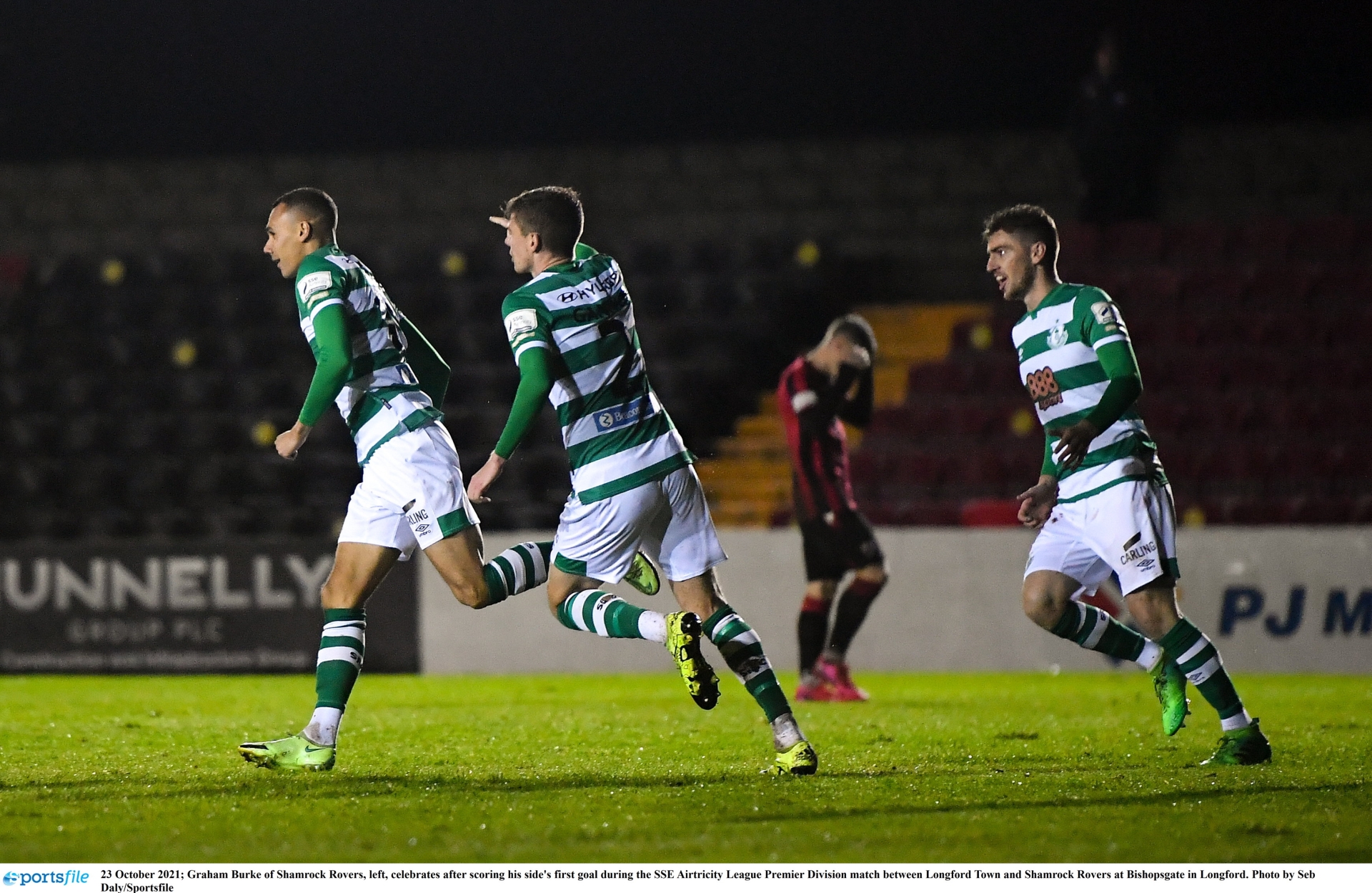