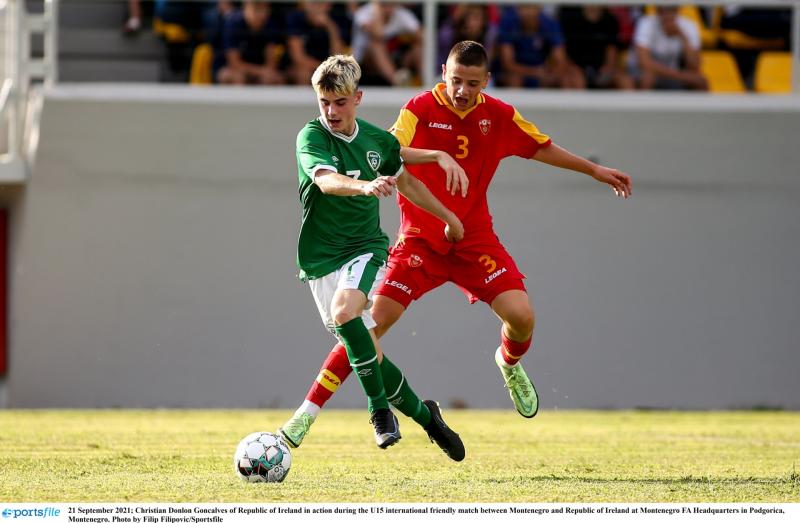 Christian Donlon-Goncalves pictured in action for the Republic of Ireland in the U-15 international friendly against Montenegro Photo: Filip Filipovic/Sportsfile

The Republic of Ireland Men's Under-15s, including former Ballyboro FC player Christian Donlon-Goncalves on the starting team, began their season with an impressive 2-0 victory over Montenegro in Podgorcia on Tuesday.

The Republic of Ireland Under-15s were then edged out 1-0 in a second friendly against Montenegro on Thursday.

Christian Donlon-Goncalves did not start on this occasion but made a big impact after he was brought on for the second half.

Christian, a student at Lanesboro Community College,  hails from Cloontuskert and has long been regarded as an outstanding prospect. Christian played with Ballyboro FC at all age levels from under 6 to under 15. He moved to the Mayo League of Ireland under 14 team last year.

A second-half goal by Vuk Vlahovic just before the hour mark was enough to win the game for the hosts in an even contest at the Montenegro FA HQ in Podgorica.

Ireland were the livelier of the two teams with Marven Chan and Ike Orazi on the lookout to create chances early on in the first-half.

In the 24th minute Cathal O’Sullivan had a dangerous free-kick that just about avoided the head of Mason Melia and fell safely into the hands of goalkeeper Tomas Djurovic.

On the half-hour mark Orazi drove at the Montenegro goal and let fly but could only find the side-netting. It was the best chance for Ireland in a half of few chances.

At the break Head Coach Jason Donohue brought on Richard Vodo for Sean Moore and Christian Donlon-Goncalves for Kyle Fitzgerald.

The game came alive in the 53rd minute when Montenegro were through on goal but Jack Ellis pulled off a superb save to deny the hosts. From the kick-out, Luke Mulligan played a ball over the top that found Donlon-Goncalves who attempted to lift the ball over Djurovic but he was unable to find the target.

In the 57th minute Montenegro took the lead, Vuk Vlahovic latched onto a through ball and he was able to fire under the body of Ellis.

Montenegro went on the hunt for a second and Ellis was able to save at the feet of Vlahaovic as he began to have a greater influence on the game.

Ireland had one final chance in the match late on when Donlon-Goncalves forced Djurovic into a fine save but that was to be the last chance and the game ended in defeat.

Republic of Ireland Men's Under-15 squad