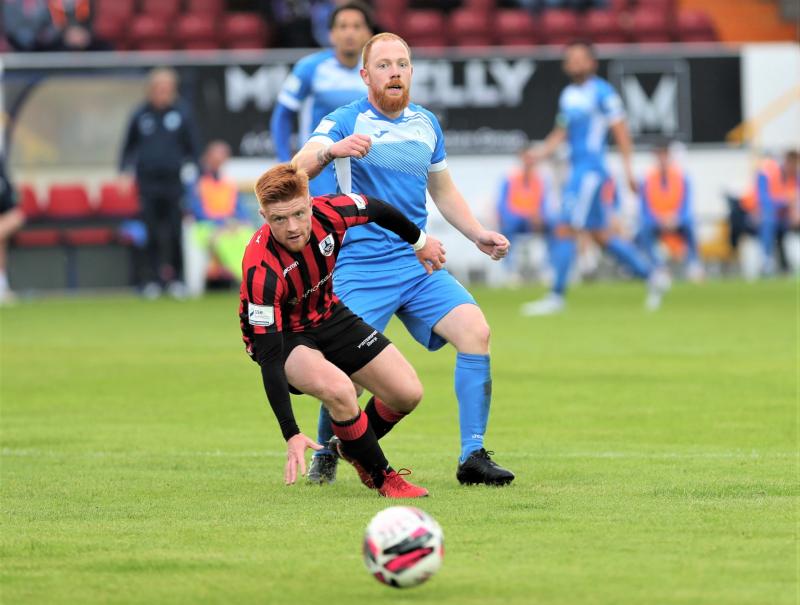 Longford Town manager Daire Doyle won’t admit defeat yet but if his side are going to get relegated he wants them to go down fighting.

The Town fell to a 3-0 defeat against Finn Harps at Bishopsgate on Saturday night last. They are now 14 points adrift of Waterford who are in 9th place now.

Doyle wants his side to keep giving their all. He said: “We have a group of players in there that I know will do that. We have staff members here in this group that are excellent.

“ I can’t ask for more. They give me everything they have. The work that we do week in week out on the training pitch is at a very high level. We need to continue to do that.”

Longford started brightly on Saturday but Harps began to come into the game and took the lead on 14 minutes when Jordan Mustoe’s cross hit off Town defender Mick McDonnell and the ball ended up in the net.

Doyle said: “We did start the game well and we had one or two good chances. After that Finn Harps did grow into the game.

“We are disappointed in the manner in which we conceded the first goal, obviously they did get that bit of luck with the deflection. We should’ve stopped that cross before it comes in.”

The game changed in the space of three minutes. Harps keeper Mark McGinley pulled off a superb save to deny Aodh Dervin on 34 minutes and in the 37th minute Harps doubled their lead through Ryan Rainey.

Doyle said: “The shot that Aodh Dervin had when the game was at 1-0. From where he’s looking like he’s kicking it, it looks like it’s going directly into the corner of the net. You have to give McGinley credit because that’s one of the saves of the season.

“All of a sudden it goes up the other end, they have a ball which drops outside the box and they get a wonder volley from Rainey that goes into the top corner. They are the fine margins and the little things that can sometimes cost you.”

When the Town were chasing the game Harps were able to sit back and soak up the pressure and they also brought on experienced players. Doyle believes that was the difference between the two sides.

“What that Finn Harps side has is lots of experience. That counted for them there tonight.

“From ourselves we are a young side. The lads kept going and plugged at it. It wasn’t to be for us tonight, for whatever reason; for maybe a small bit of quality lacking in the final third.”

Longford are away to Waterford this Friday night. They’ve lost their two previous meetings against the  Blues and Doyle is hopeful it can be third time lucky for his side.