Away to league leaders Shamrock Rovers on Sunday August 8 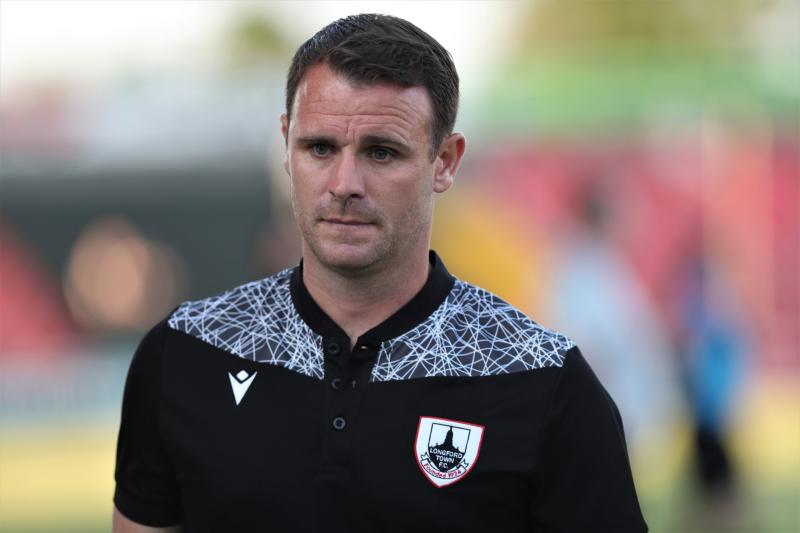 Longford Town, stuck at the bottom of the Premier Division table, are in serious relegation trouble and suffered yet another setback with Derry City coming out on top at Bishopsgate on Saturday night.

Daire Doyle’s side still await a second league win of the season as they fell to their 13th defeat. The midlanders are now nine points adrift of Finn Harps who are in 9th place and have a game in hand.

The same problems continue to hit Longford hard, not finding the back of the net and not keeping a clean sheet, and next up is a daunting task against Shamrock Rovers at Tallaght Stadium on Sunday August 8.

Barely 20 seconds had gone on the clock when Derry keeper Nathan Gartside was forced into making a save; Dylan Grimes played the ball back to Aaron McNally and Gartside got down to push the ball out for a corner.

Rob Manley then shot over as the Town started with a real purpose. Slowly Derry came into the game. In the 17th minute Evan McLaughlin drilled his shot wide while in the 25th minute Junior’s free-kick was blocked down by the wall.

Aodh Dervin played a lovely through ball to Manley one minute later, he won a corner but it came to nothing. Dervin was down the other end defending in the 30th minute when he charged down Cameron McJannet’s shot.

The visitors took the lead in the 31st minute and it was a fine move. Junior played the ball to James Akintunde who in turn found Danny Lafferty and he fired the ball into the net.

In the 41st minute Rob Manley played a lovely ball across the face of the goalmouth but Derry defender Eoin Toal was in the perfect position to clear the danger out for a corner.

The visitors had a glorious chance to double their advantage in the 57th minute when Junior laid the ball off to Evan McLaughlin but the youngster’s low drive just went inches wide.

Try as they might, Town couldn’t muster up anything to trouble the Derry netminder Gartside. In the 70th minute Aaron Robinson did very well to block Akintunde’s effort and from the resulting corner Lafferty volleyed the ball over the bar.

Derry scored a killer second goal in the 82nd minute. Akintunde and Junior caused problems for the Town all night and they combined with Junior finding the back of the net with a fine strike to settle the issue.