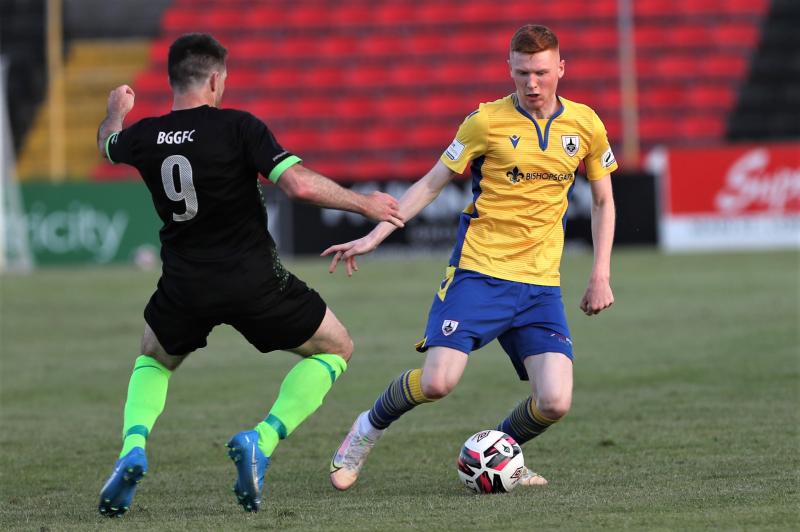 Darragh Nugent pictured in action for Longford Town against Bangor GG in the FAI Cup first round game at Bishopsgate Photo: Syl Healy

Longford Town are currently on a good run with a couple of draws in the league along with a comprehensive 5-0 victory over Bangor GG FC in the first round of the FAI Cup at Bishopsgate on Saturday night last.

Those results are clearly a good boost for the confidence factor and manager Daire Doyle will obviously be hoping that they can maintain that form when they return to Premier Division action at home to Derry City on Saturday night, kick-off 7.30pm.

The Cup clash against Bangor GG was a possible banana skin against the well organised Leinster Senior League side that included many former League of Ireland players including the former Town striker Davy O’Sullivan.

Daire Doyle used a near full strength starting eleven and the bench was also strong. Central defender Mick McDonnell made a welcome return to the team after missing three games through suspension and both he and man of the match Aaron O’Driscoll dealt well with the aerial bombardment tactic operated by Bangor GG.

The Dublin club are a combination of Bangor Celtic, Greenhills and Greenpark and like many Leinster Senior League clubs have some players who could still play at the highest level.

It was a special night for two of Longford’s recent signings Dean Willians a\nd Darragh Nugent who have joined the club on loan from Shamrock Rovers.

Both Williams and Nugent got their names on the scoresheet with Williams opening the scoring in the 16th minute after latching on to an excellent pass from Karl Chambers.

The visitors were limited to some long range shots as the resolute Town defence were in control for most of the game.

Despite dominating for long periods it took until after the hour mark for Longford to score a second goal and finish off a very determined Bangor GG side.

Rob Manley was brought down in the box and Dylan Grimes made no mistake from the penalty. Darragh Nugent then scored a stunning third goal with Callum Warfield and O’Driscoll also getting their names on the scoresheet.

After that exciting Cup win, it is back to the serious business of picking up badly needed points in the battle to avoid relegation in the Premier Division and Derry City are the visitors to Bishopsgate on Saturday night.

This will be the third meeting between the club this season and at this stage the Town are holding the upper hand with a win and a draw.

In the opening game of the season at Bishopsgate back in the middle of March, Longford won 2-0 with Dylan Grimes and Joe Gorman scoring the goals.

The second fixture was played at the Ryan McBride Brandywell Stadium in early May and it took an injury time equaliser from James Akintunde to deny the Town a vital victory after Rob Manley had broken the deadlock in the 74th minute.

Late, late goals for the opposition have deprived Daire Doyle’s side of quite a few precious points in the Premier Division, including the two games against the reigning league champions Shamrock Rovers.

Derry have made a few signings during the July transfer window and will be difficult to beat but Longford will believe that they can spring a surprise, just like what happened in the opening game of the season.