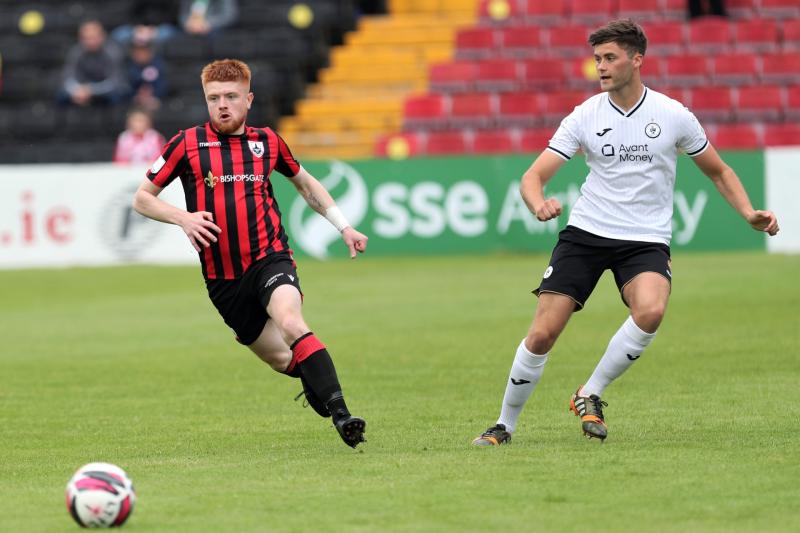 Bottom of the table Longford Town will be looking for a badly needed win when they take on Drogheda United in the SSE Airtricity League Premier Division clash at Bishopsgate on Saturday night, kick-off 7.30pm.

After last weekend’s games, Drogheda sit proudly in fifth place on 29 points and will be coming to Longford in a confident frame of mind.

With suspension ruling out both Aodh Dervin (five yellow cards) and Mick McDonnell (additional red card ban), the Town will be hard pressed to get something from this crucial clash in their relegation battle.

The joint table toppers Sligo Rovers were the visitors to Bishopsgate on Saturday night last and maintained their title challenge with a 1-0 win against Daire Doyle’s side.

The crucial only goal came from a first half penalty converted by Jordan Gibson when the impressive Romeo Parkes was brought down in the box.

It was good to see some of the younger Longford players getting a run in the second half. Matthew O’Brien replaced Dean Zambra and did very well against the experienced Sligo players.

O’Brien was unlucky not to score when his long range shot flashed past the post with the Sligo reserve keeper Luke McNicholas well beaten.

McNicholas, who replaced the injured Ed McGinty in the 35th minute, made a few tremendous saves in the closing stages of the game to secure the win for Sligo and consolidate their place at the top of the table alongside Shamrock Rovers.

Another promising young player, Cavan native Aaron McCabe, replaced Aaron Dobbs in the 86th minute but maybe he should have got an extra ten or fifteen minutes to make an impact.

There is no doubt that the Town deserved a draw but unfortunately this is the same story all season in the quest for the vital points in the fierce battle to avoid automatic relegation.

By all accounts the manager Daire Doyle is hoping to strengthen his squad now that the July transfer window is open.

There have been a few departures recently with Joe Gorman and Sam Verdon moving to other clubs. Verdon is expected to join Bray Wanderers. Aaron Bolger, who was on loan from Cardiff City, has also left Longford Town FC.

Boss Doyle will be hoping to bring in some experienced players to boost his generally inexperienced squad.

Longford need to get a positive result against Drogheda on Saturday night in the third meeting between the clubs this season.

The Town were beaten in both matches, going down 4-0 at Bishopsgate and 4-1 in the away fixture.

One has to say that Drogheda deserved the wins but our performances against the team that came up with us to the Premier Division leaves a lot to be desired.

The Town players will go into Saturday’s game looking to make amends for the previous setbacks against Tim Clancy’s exciting side.

Deegan also played with Longford during the 2007 season but he unfortunately missed the FAI Cup Final that year due to suspension. Gary suffered the same fate when with Shelbourne for the promotion/relegation play-off against the Town at Richmond Park last season.

Another former Town player Daniel O’Reilly is also with Drogheda and playing well in the defence. O’Reilly scored his first goal for the Co Louth club in their win over Finn Harps on Friday night last.

Mark Doyle is one of the best strikers in the league and he added to his impressive tally with the opening goal against Harps. Darragh Markey got the other goal for Drogheda in the impressive 3-1 home win.

Daire Doyle’s Longford side have failed to register a win in 18 league fixtures but maybe that will change against Drogheda at Bishopsgate on Saturday night with the backing of the home supporters as a 500 attendance is now permitted following the easing of the Covid restrictions.