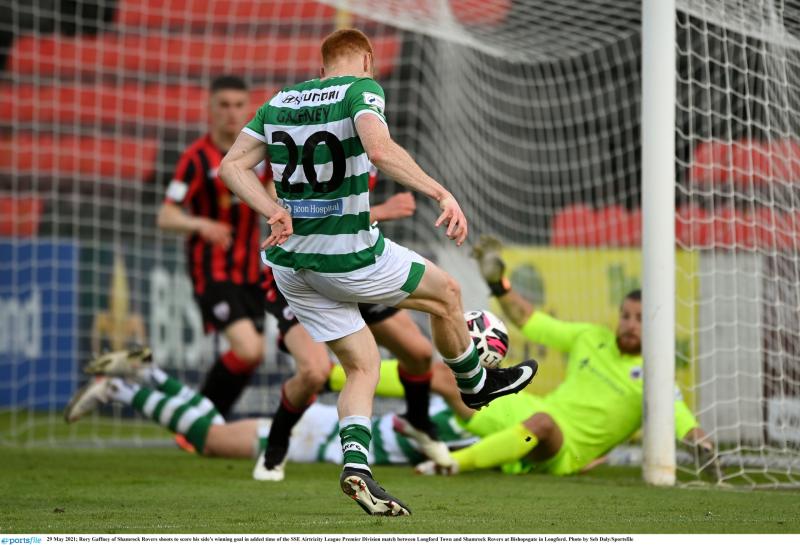 Just as they had done when the sides clashed at Tallaght Stadium earlier in the season, Shamrock Rovers scored a last gasp winner to snatch a precious point away from Longford Town in a dramatic end to the SSE Airtricity League Premier Division game at Bishopsgate on Saturday.

It was a real sickening blow for the brave home side who had defended so well to keep out the frustrated reigning champions and looked like holding out for a surprise draw, only to be eventually breached with almost six minutes of stoppage time played.

Five minutes of additional time went up on the sideline board but there was no full-time whistle from referee Ray Matthews in allowing fortunate Rovers to launch one more attack which ended in Rory Gaffney planting the ball in the back of the net after a goalmouth scramble.

Rovers dominated possession and went close to breaking the deadlock on a few occasions during the course of the contest with Gaffney having a goal disallowed for hand ball in the 29th minute of the first half.

And when the impressive Graham Burke missed a sitter in dragging his shot wide with the goals at his mercy in the 64th minute, the game looked like ending in a scoreless draw.

Longford felt aggrieved when they had a penalty claim turned down in the early stages of the match when a shot from Aaron McNally, following his penetrating run through the opposing defence, appeared to be blocked down by the arm of Rovers defender Lee Grace.

While generally on the backfoot, the Town created a couple of decent chances and were on the brink of achieving a terrific result only to be mugged in a frantic finish.