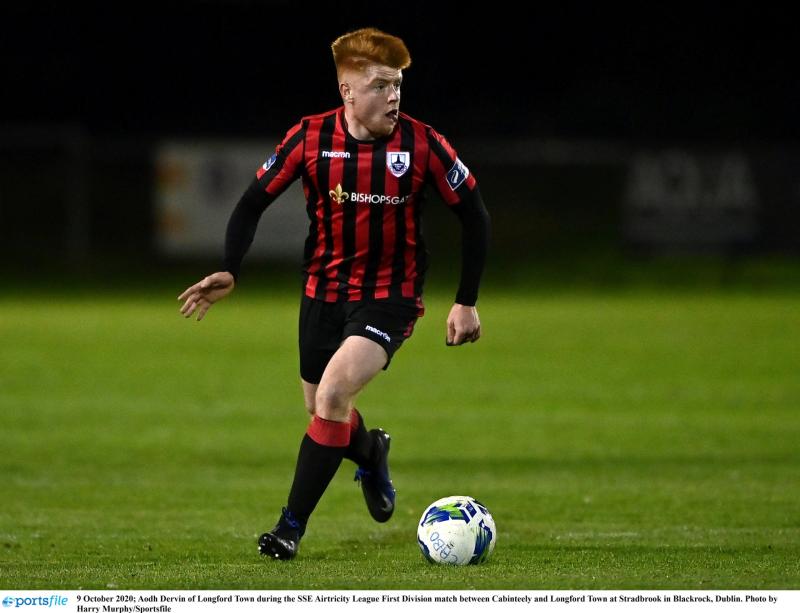 Aodh Dervin, who has re-signed for Longford Town for the 2021 season, is pictured in action against Cabinteely in the recent First Division game at Stradbrook Pic: Harry Murphy/Sportsfile

Over the last couple of weeks Longford Town manager Daire Doyle has been very busy re-signing players who were instrumental in getting the club back into the Premier Division, most notably local star Aodh Dervin.

Midfield dynamo Dervin will be going all out to make a major impact next season after earning the proud distinction of lining-out for his home town club in the top flight of Irish soccer.

Last weekend the news filtered through that Aodh had re-signed for the Town which is great news for the club and the management. He is a great example for local kids who have ambition to be professional footballers and shows that is it possible for local players to make it through to the senior team if the commitment is there.

Dervin has proved over the last few seasons what a quality player he is and good enough to go all the way to the top as he pits his skills against all the big names in the Premier Division.

Aodh has proven that locals and other youth players can make it through to the Longford Town senior side.

Karl Chambers is another player who has come through from the Town U-19s and the versatile player has been a valuable asset during his time with the club as he demonstrated in his fine performances in the recent play-offs.

Aaron McCabe, who joined Longford from the Cavan-Monaghan under 17s, has made great progress in the Town senior squad. The Cavan lad from Lavey scored three crucial goals in the 2020 First Division campaign which basically yielded six points in the games against Galway United at Eamon Deacy Park and against Wexford at Bishopsgate.

Daire Doyle has proven that he will give youth their chance if he thinks the players are good enough. Matthew O’Brien, who is still eligible for the under 19s, has also featured for the first team on a few seasons in the shortened season after joining the club from Phoenix FC (Dublin).

Boss Doyle has been busy with negotiations with players who have been with the club, with powerful defender Joe Gorman also re-signed, and the manager is also looking to bring in new players who will be good enough to keep Longford in the Premier Division.

To date exciting winger Callum Thompson has joined the Town from Bohemians after a very impressive 2020 season in the First Division when on loan to Bray Wanderers.

The former St Joseph's Boys player moved to Wolves but like many young Irish players he missed home and came back to join Bohs.

During his loan spell with Bray the tricky winger caused many problems for the Town defence. Bray beat the Town twice in the league, 2-0 at Bishopsgate and 3-0 at the Carlisle grounds, and Callum was very impressive in both games.

Defender Paddy Kirk has also signed from Bohemians to play with Longford Town in the Premier Division and by all accounts he is a very good player who is basically a left-full but who can also operate effectively in the centre.

Paddy has been with Bohs for six years, two seasons with the senior side after graduating from their underage teams.

Some people think that if the Town can stay out of the bottom two at the end of the season that would be progress for the club.

Personally, I think we need to plan to be mid-table and be challenging for a top half finish. Having said that, there is no doubt that the established Premier teams will be looking at Longford and thinking there’s full points for us against the play-off winners.

Knowing Daire Doyle, I would expect him to be looking to establish his team as difficult opponents to beat in the Premier Division next season.

Most of the top flight sides have been strengthening their squads and the other promoted club, 2020 First Division champions Drogheda United, have signed striker Dinny Corcoran from Bohemians and Gary Deegan from Shelbourne.

The coming weeks will be very busy for the league managers in both divisions of the Airtricity League as squads are assembled and there is a big buzz in Longford as the supporters look forward to the return of Premier Division football in 2021.

Longford Town FC replica gear is on sale in Elverys Sports beside Aldi and there is strong interest in the merchandise with the club back in the big time.