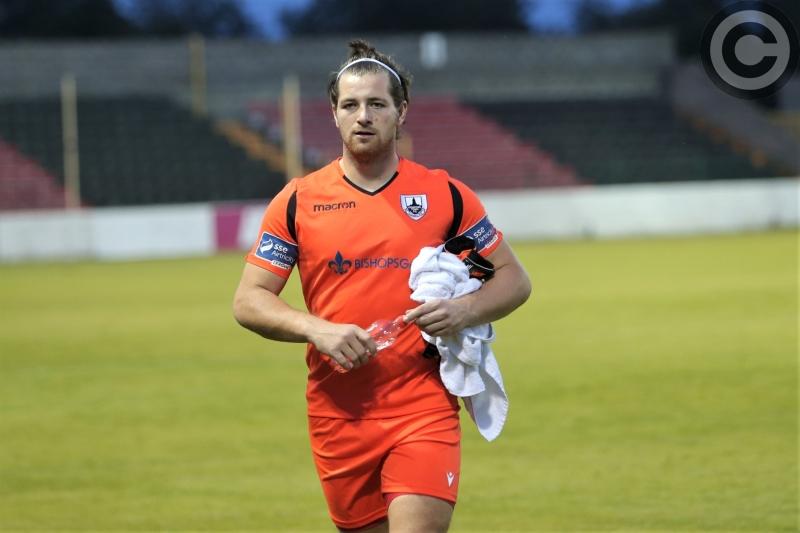 Longford Town goalkeeper Lee Steacy, who kept his net intact in the easy win away to Athlone on Friday night Picture: Syl Healy

Longford Town’s excellent record over Athlone Town continued on Friday night when they crushed their near neighbours in most emphatic fashion.

Daire Doyle’s side took the lead at Athlone Town Stadium on 10 minutes when Aodh Dervin played a perfect long ball into Rob Manley who evaded the challenge of an Athlone defender before slotting the ball past opposing keeper Aaron Myles.

Just after the half hour mark Athlone had a chance to level terms when a cross from Ronan Manning connected with the head of Ciaran Grogan but his effort came off the crossbar.

On 59 minutes Dean Byrne forced Aaron Myles to make a fine save as Longford looked for their second goal to make sure of the victory in the midlands derby. On 63 minutes Sam Verdon’s effort just went wide but Verdon got Longford’s second goal on 68 minutes when he converted a penalty.

Athlone were reduced to 10 men on 74 minutes when Lee Duffy was shown a straight red card for lashing out at Dean Zambra. On 76 minutes it was 3-0 to Longford when Athlone defender Scott Delaney put the ball into his own net.

Longford were running riot at this stage and Athlone had to play the closing stages of the game with just nine players on the pitch after Evan White was stretchered off injured and all their subs used.

Substitute Karl Chambers completed a great win for Longford when he scored the fourth goal in the 90th minute and the push for promotion is gathering momentum with just four fixtures remaining, the first of which is against Galway United at Bishopsgate on Saturday week October 3.