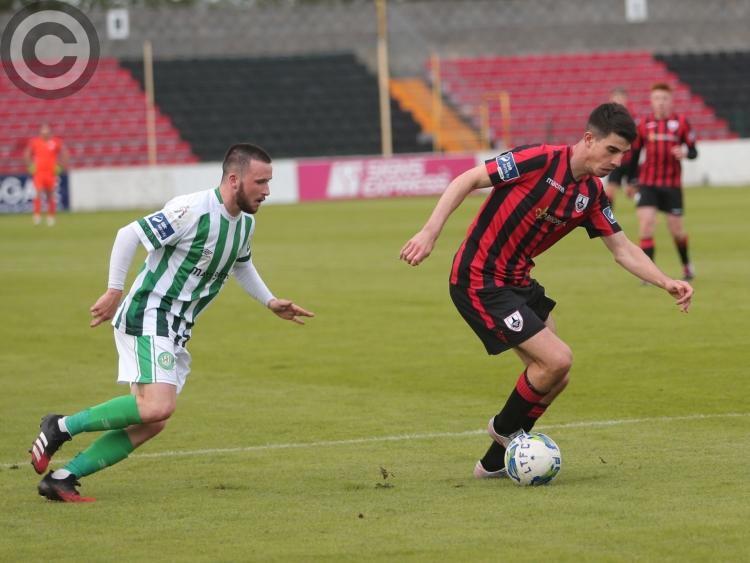 Longford Town suffered their first defeat in the Airtricity League this season with former striker Gary Shaw inflicting the damage to score the two goals for Bray Wanderers in a very disappointing game at Bishopsgate on Monday night.

It was an extremely poor performance from the home side. Their passing was sloppy and they were very indecisive with their decision making. Longford created very few goal scoring chances with Bray keeper Brian Maher never really tested throughout the match.

Playing at Bishopsgate in a competitive fixture for the first time since the 2-0 win over Shamrock Rovers II back in February due to the outbreak of the Covid-19 pandemic, the Town were rocked by the concession of a Bray goal with only four minutes gone on the clock.

Dylan Barrett’s corner was headed home by Gary Shaw and Longford were fortunate not to fall further behind when their keeper Lee Steacy pulled off an excellent save to deny Shaw in the 17th minute.

A killer second goal materialised for Bray in the 21st minute when Joe Doyle’s cross connected with the head of Shaw at the near post and he made no mistake.

Longford’s first and only real chance in the first half didn’t come until the 32nd minute when a Dylan Grimes free-kick was headed just over the bar by Mick McDonnell.

As the first half came to a close Bray pressed for a third goal with Town defender Dylan Hand having to direct the ball out twice for corners after some good play by the lively Callum Thompson.

Chances were scarce in the second half. James English should have done better with his header in the 69th minute while Bray defender Killian Cantwell did well to block down Sam Verdon’s shot two minutes later.

That was it for Longford Town who really need to produce a much improved display  at home to Athlone Town on Saturday night next.